Redesigning We the People

Redesigning We the People

April 21, 2016 at 9:12 AM ET by Jason Goldman
Twitter Facebook Email
Summary:
Improving the way you engage with the White House through our online petitions platform

In July 2015, we announced a big change in the way we would answer petitions on We the People.

We committed to responding to you within a 60-day timeframe, whenever possible. We assembled a team of people dedicated to getting your policy questions and requests to the right people so you get the most informed response. (Often, that meant the heads of agencies or the foremost experts on a given issue.) We also answered a backlog of 20 petitions, resulting in 2.5 million people receiving a response from us within a single day. 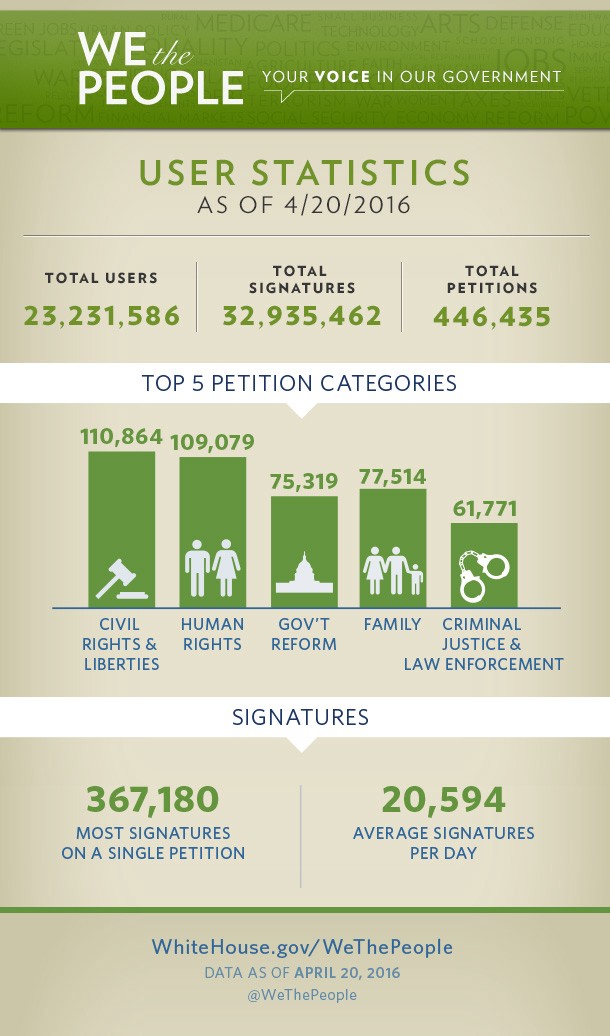 But more importantly, we committed to continue listening.

What did you want the experience of using We the People to be like? What tools would you want and how could we help you put them to use? How could we make this the best experience for you?

Over the past few years, we’ve paid close attention as literally millions of people have created and signed petitions — from Oregon all the way to the furthest reaches of India. We’ve responded to you on issues of overtime rules, the STEM OPT regulation, and the Syrian refugee crisis. We’ve looked at how you’ve used the site, where you’ve used it from, what tools you’ve used — and which you haven’t. We’ve read your feedback. And we’ve even brought you in to talk with us.

Now, thanks in no small part to all of your time, work, and feedback, we have something exciting to announce: a new version of We the People.

While much is still the same, you’ll notice that a few key features have significant updates. We made these changes because we think they’ll make using the site easier and more fun — but also because it’s our priority to continually evolve We the People toward the needs and aspirations of its community.

Here’s what we did:

We made it simpler for more people to create and sign petitions from any device.

It turns out that people use their phones to read the internet — a lot. (Shocking, we know.) As a result, an overwhelming amount of the traffic on We the People came from phones, but earlier iterations of the site weren’t optimized for mobile. It’s not hard to imagine how frustrating this may have been for people trying to sign a petition, so we made the new version of We the People mobile-friendly.

Now there are mobile and desktop breakpoints, allowing the site to scale-to-fit a variety of devices. Certain elements, like the “sign petition” form, shift to fit your screen, making it easier — and prettier! — to create and sign petitions from your phone. Think about it: You can now find, sign, and share a petition while on your daily commute. That’s pretty cool.

We also did an extensive round of testing to ensure the site is accessible for screen readers, meaning that visually-impaired users can have the best experience possible.

We built more guidance into the process of creating a petition so you could make yours the best petition possible.

Over We the People’s history, we’ve received a lot of petitions (just under half a million). We’re thrilled by the interest and excited by the investment in making real change that it implies. But we also realized that we were receiving a lot of petition requests that fell outside of our jurisdiction to respond to or resolve.

That’s why we decided to make one part of the petitioning process a little more guided: the creation flow. Now, petition creators can choose between five different request types, each of which speaks directly to the actions the federal government can take. We also provided more clarity in our Terms of Participation and examples of petitions that have successfully led to a change in government.

We may receive fewer petitions with this update, but we feel confident we will receive a higher percentage of them that we can speak directly to — and make real changes from.

We went back to the basics.

When analyzing our traffic patterns, we noticed that users almost universally only took two actions: They created a petition or they signed one. They weren’t stopping by other parts of the site all that often. So we stripped out pages, removing navigation items and unnecessary features, in order to bring We the People back to the bare essentials.

The result? Now it takes just a few, easy steps to view, sign, and then share a petition. That means it’s also way simpler for people — no matter their age, location, or level of technical prowess — to participate in petitioning. That’s a critical step to ensure that We the People remains universally accessible.

Some things, of course, stayed the same. The threshold for response is still 100,000 signatures. When we do respond, we are still going to be candid and honest with you. And whenever possible, we’re going to find ways to engage further: to talk with you directly, to answer your questions, and to connect you to ongoing opportunities to learn about and participate in a cause that matters to you.

That’s the most exciting element of We the People. Not just the conversations it can start and the real change it can foster, but the potential future it points to — one of enduring civic participation.

And it’s not just the petitioning public that are excited about the opportunity for dialogue that We the People offers. As petitions have been passed back to the departments and Administration officials most familiar with the issues they address, we’ve been continually inspired by the gravity and vibrancy of the discussion that ensues. The public servants who work on these issues and solve these problems truly care about what the American people feel and think. They are eager to hear from you.

In addition to the incredible feedback we got from the We the People community of petition creators and signers, we spent a lot of time — and got a lot of generous input — from people both inside and outside the Administration. We couldn’t have gotten to this newest iteration of We the People without the imagination, efforts, and work of the late Jake Brewer, Senior Advisor to the U.S. Chief Technology Office, who made it a priority to consult people from both sides of the political aisle and various organizations invested in public petitioning. That’s also true for those who answered our call for new ideas: Dustin Senos’ thinking around design helped us approach the fundamental questions of We the People in a new light. Paul Ford and Rich Ziade compelled us to think about the long term goals of the platform and how best to serve them.

And, as always, we’ll still be listening to your thoughts and feedback. Follow us here: @WeThePeople. And write to us directly here.

As part of the redesign rollout, I’ll be hosting an open Q&A over on Product Hunt at noon today. Tune in to ask a question, simply listen to the conversation, or — best of all — see how you might get involved. Hope to see you there!

Our true hope for We the People is that it will become an essential tool of civic participation — one that outlives this Administration and is carried on by the next and the next (and the next).

We can’t wait to see what’s next.