Each year, federal student loans help millions of Americans obtain a college education—an investment that, on average, has high returns. The earnings premium from a college education has risen steadily over the past decades, and today the median worker with a bachelor’s degree earns nearly $1 million more over the course of their career than the same type of worker with just a high school diploma, when both work full-time, full-year beginning at age 25. However, these benefits are earned over a lifetime, increasing over time. Traditional 10-year loans have flat repayment schedules, making it difficult for individuals to pay early in their career when their salaries are lower. The recent expansion of the President’s Pay As You Earn (PAYE) repayment plan gives students greater flexibility, enabling them to pay less when they are earning less and more as they earn more.

While the average returns to college remain high, substantial variation in outcomes exists, and some students leave College poorly equipped to manage their debt, whether due to limited labor market opportunities or a high debt burden. At the same time, other students still struggle to finance their education, indicating that challenges remain in the higher education sector. As the labor market tumbled during the Great Recession, some acute challenges came to the forefront, particularly in student debt repayment. Over the past seven years, Administration policies and an improving labor market have led to substantial improvement, and recent trends in student loans show signs of progress. The Administration continues to work to improve college quality and reduce costs to ensure that all hardworking students can invest in a high-quality education that prepares them for a career.

1. Cohort default rates have declined among borrowers who recently left school, but rates remain elevated, pointing to the importance of efforts to enroll borrowers in more flexible repayment plans. Every year, the Department of Education releases a cohort default rate (CDR), which measures the fraction of borrowers in a fiscal year cohort of students that have defaulted on federal student loans in the first three years after entering repayment. After rising for several years due to factors that include labor market challenges during the Great Recession, reforms to student loan benefits, and the growth of for-profit institutions, default rates have fallen among recent cohorts. Among borrowers who began repaying their student loans in fiscal year 2012, the three-year default rate was 11.8 percent, down 2.9 percentage points from the peak two years prior. 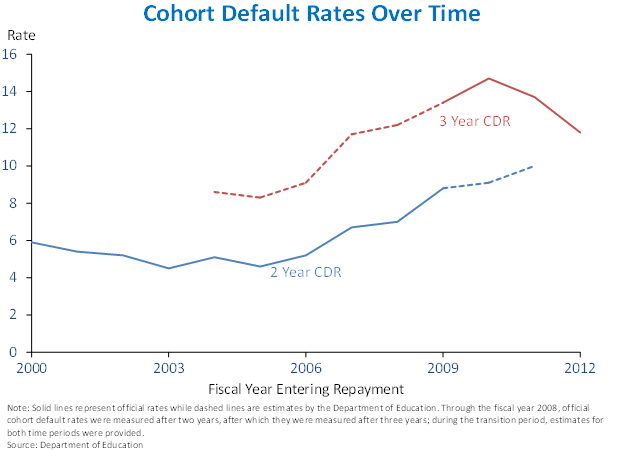 2. Delinquencies have also fallen in recent years. Among recipients with Direct Federal Loans who were scheduled to be making payments, the 31+ day delinquency rate, measuring the proportion of borrowers more than 31 days late on payments, in December 2015 was 2.5 percentage points lower than a year earlier. In addition to an improving labor market, Administration initiatives such as the expansion of more flexible repayment plans may have contributed to this decline. 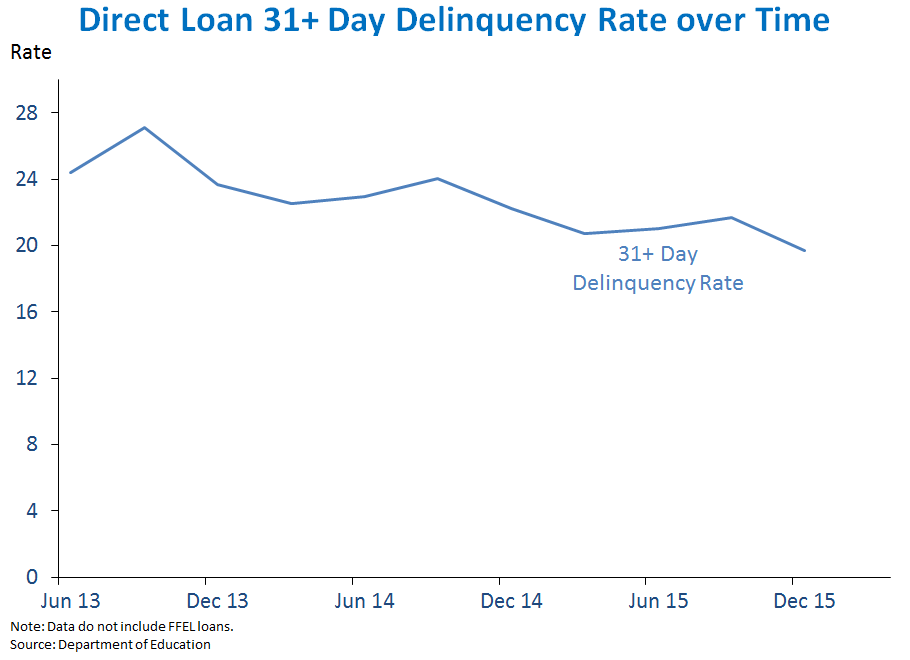 3. Unemployment and economic hardship deferments have declined dramatically. Deferments allow students with negative economic outcomes to postpone student loan payments. Among Direct Loan recipients, these types of deferments, which suggest borrowers are facing particular struggles in finding a job and repaying their loans, saw a 31 percent year-over-year decline in the first quarter of fiscal year 2016. This means that compared to the first quarter of fiscal year 2015, 170,000 fewer Direct Loan recipients were in either of these hardship-related deferments. This decline occurred even as the number of Direct Loan borrowers increased. 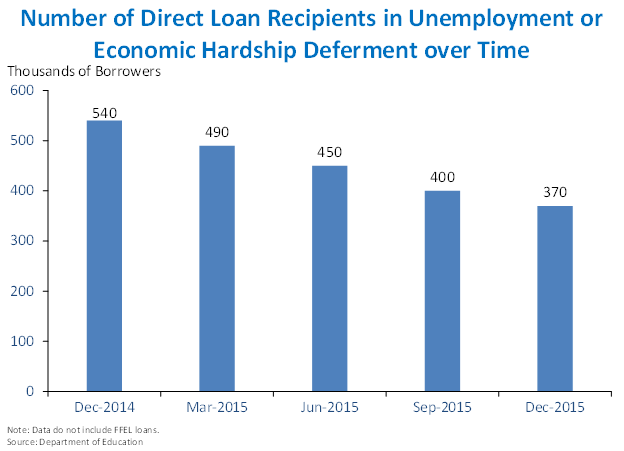 4. Increased availability and usage of flexible repayment options such as the President’s Pay As You Earn and other income-driven repayment (IDR) plans have helped borrowers make on-time payments. Today, IDR plans allow all student borrowers with federal direct loans to cap their payments at a manageable portion of their income. As of the first quarter of fiscal year 2016, nearly 5 million (roughly 1 in 5) borrowers with federally-managed debt were enrolled in IDR plans. The share of borrowers with federally-managed debt enrolled in IDR has quadrupled over the last four years from 5 percent in the first quarter of fiscal year 2012 to 20 percent at the same point in 2016. 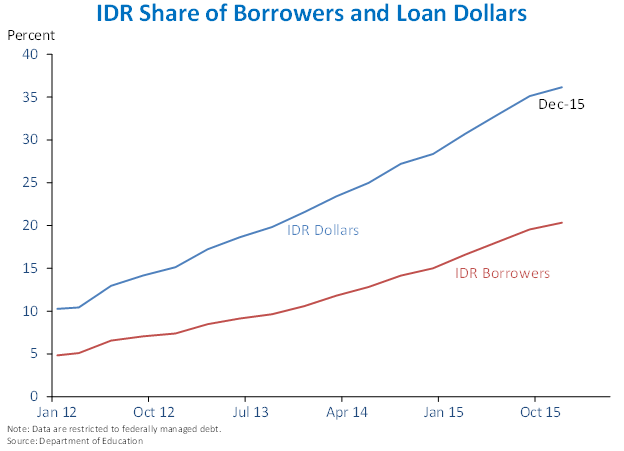 5. Data on recent cohorts show promising repayment trends and improving outcomes over time. Although borrowers in the fiscal year 2009 cohort entered repayment at the peak of the recession, data show that after five years, loan amounts comprising about 70 percent of the cohort’s amounts borrowed prior to entering repayment had been paid off or were in repayment. Borrower-level data show similar trends. After five years, 17 percent of borrowers in the 2009 cohort had paid off all of their debt, and an additional 51 percent had a loan in repayment. 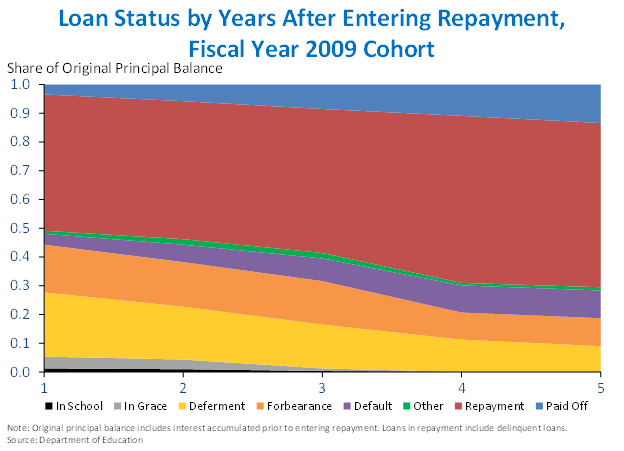 6. Shifts have also occurred in the types of schools that first-time student loan borrowers attend, including a trend away from for-profits. New data show a sharp decline in the number of first-time borrowers enrolled at for-profit colleges. These colleges tend to have higher rates of default and non-repayment than colleges in other sectors, raising potential concerns about the quality of education provided. The Department of Education’s Gainful Employment rule takes steps to help ensure that career programs largely at for-profit colleges are providing a high quality education for their borrowers. 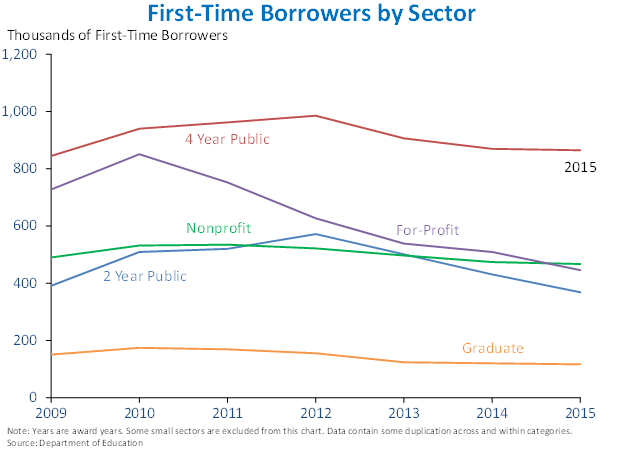 State-by-state statistics are presented below.

Sandra Black is a Member of the Council of Economic Advisers.