What You Need to Know About Non-Compete Agreements, and How States are Responding:

May 5, 2016 at 11:16 AM ET by Ryan Burke
Twitter Facebook Email
Summary:
Today, the White House is releasing a report about unfair non-compete agreements that some workers are being made to sign, and what we'd like to do about it.

To address issues that limit competition in the marketplace, the President has instructed executive departments and agencies to propose new ways of promoting competition and providing consumers and workers with information they need to make informed choices, in an effort to improve competitive markets and empower consumers’ and workers’ voices across the country. Building on these efforts, today the White House released a brief that provides a starting place for further investigation of the usage of one institutional factor that has the potential to hold back wages—non-compete agreements.

Here’s what you need to know.

Non-compete agreements ban workers from employment at rival firms for a certain period of time.

Non-compete agreements are contracts that ban workers at a certain company from going to work for a competing employer within a certain period of time after leaving a job. The main rationale for these agreements is to encourage innovation by preventing workers with ‘trade secrets’ from transferring technical and intellectual property of companies to rival firms. 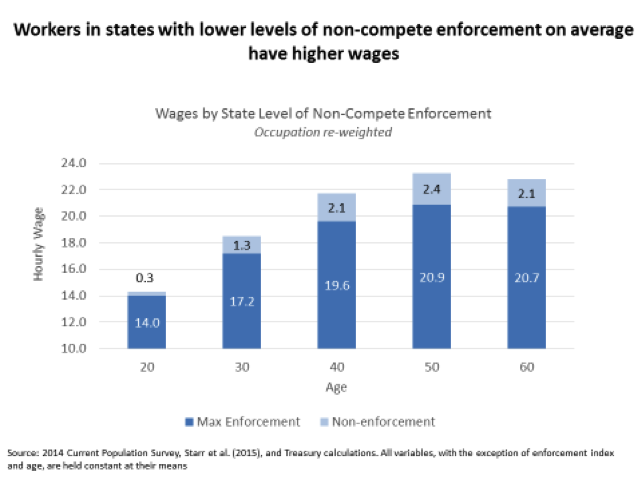 Non-compete agreements apply to nearly one-fifth of U.S. workers including a large number of low-wage workers.

Approximately 15 percent of workers without a college degree are currently subject to non-compete agreements, and 14 percent of individuals earning less than $40,000 are subject to them. Recent media coverage has raised awareness of the usage and enforcement of non-competes among low-wage occupations including fast-food employees, warehouse workers, and camp counselors. 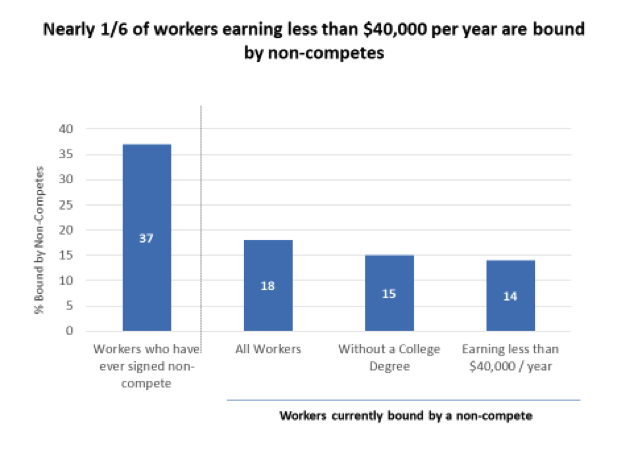 States are taking action to limit the use of non-compete agreements.

Potential issues presented by unnecessary non-compete usage and actions states are taking to address them:

1.    Workers who are unlikely to possess trade secrets (in particular, low wage workers) are nonetheless compelled to sign non-competes. Because non-competes are less likely to have the social benefit of protecting trade secrets when applied to low-wage workers, some states have proposed, and Oregon has passed, legislation restricting the enforceability of non-competes for employees under a certain income threshold.

2.    Workers are asked to sign a non-compete only after accepting a job offer, when they have already declined other offers and thus have less leverage to bargain. Given that at least 37 percent of workers are asked to sign non-compete agreements after accepting a job offer, some states, like New Hampshire, require that non-competes that are a condition of employment be offered prior to the acceptance of employment.

5.    Employers requiring non-competes often do not provide “consideration” that is above and beyond continued employment. Currently, some states require that firms provide some “consideration” above and beyond continued employment such as pay raises, training, and promotions to workers who sign a non-compete after they have already worked for a firm for some amount of time.

7.    In some sectors, non-competes can have a detrimental effect on health and well-being by restricting consumer choice. Several states will not enforce non-competes where a “public interest” exists in the consumption of critical goods and services.

Here's what happens next.

In the coming months, the White House, together with the Departments of the Treasury and Labor, will engage and convene experts in labor law, economics, government and business to facilitate discussion on non-compete agreements and their consequences. The goal will be to put forward a more specific set of best practices and call to action for state legislators to make progress on reforms to address the misuse of non-compete agreements.

Ryan Burke is a Senior Policy Advisor in the National Economic Council.