May 6, 2016 at 9:30 AM ET by Jason Furman
Twitter Facebook Email
Summary:
Summary: The economy added 160,000 jobs in April, extending the longest streak of private-sector job growth on record, as wage growth picked up.

The longest streak of private-sector job growth on record continued in April, with businesses adding 171,000 jobs, well above the pace necessary to maintain a low and stable unemployment rate. U.S. businesses have now added 14.6 million jobs over 74 straight months of job growth. Most importantly, average hourly earnings for private employees have increased 3.2 percent at an annual rate so far in 2016. Nevertheless, more work remains to sustain faster wage growth and to ensure that the benefits of the recovery are broadly shared, including investing in infrastructure and job training, implementing high-standards free trade agreements like the Trans-Pacific Partnership, and raising the minimum wage.

FIVE KEY POINTS ON THE LABOR MARKET IN APRIL 2016

1. U.S. businesses have now added 14.6 million jobs over 74 straight months, extending the longest streak on record. Today we learned that private employment rose by 171,000 jobs in April. Total nonfarm employment rose by 160,000 jobs in April, somewhat below the pace of recent months but well above the pace of 80,000 jobs a month necessary to maintain a low and stable unemployment rate given longstanding demographic trends in labor force participation. The unemployment rate held steady at 5.0 percent in April, though the labor force participation rate decreased. Average hourly earnings for private employees increased 0.3 percent in April, while wage growth in previous months was revised upward, eliminating a drop seen in earlier estimates. Wage growth has accelerated in recent months: over the last twelve months, average hourly earnings increased 2.5 percent, and have grown at 3.2 percent at an annual rate so far in 2016. 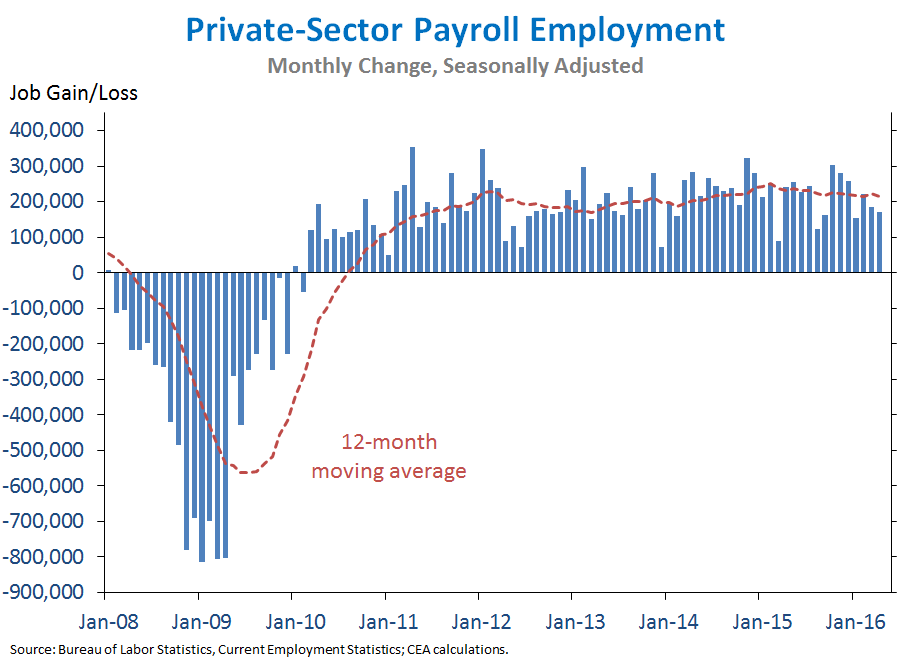 2. As the labor market continues to recover, the distribution of unemployment has shifted towards individuals who have recently entered the workforce or have chosen to leave a job and away from those who have lost a job. In recessions, the distribution of unemployment shifts more heavily towards those who are unemployed due to involuntary job loss, while the share of the unemployed who have either newly entered or reentered the labor force or left a job voluntarily decreases. In the current business cycle, the share of unemployment attributable to those who lost their jobs rose to an all-time high of 65 percent in September 2009. Over the course of the recovery, however, this share has fallen steadily and has been below its pre-recession average for the past two years, standing at 49 percent in April 2016. With the continuing improvement in the labor market, the share of unemployed workers who recently entered the labor force has increased, and has been noticeably above its pre-recession average in recent months. Moreover, the share of unemployment due to individuals voluntarily leaving their jobs has increased steadily as Americans feel more secure about their prospects in the labor market, reaching its pre-recession average of 11 percent in April for the first time since 2008. 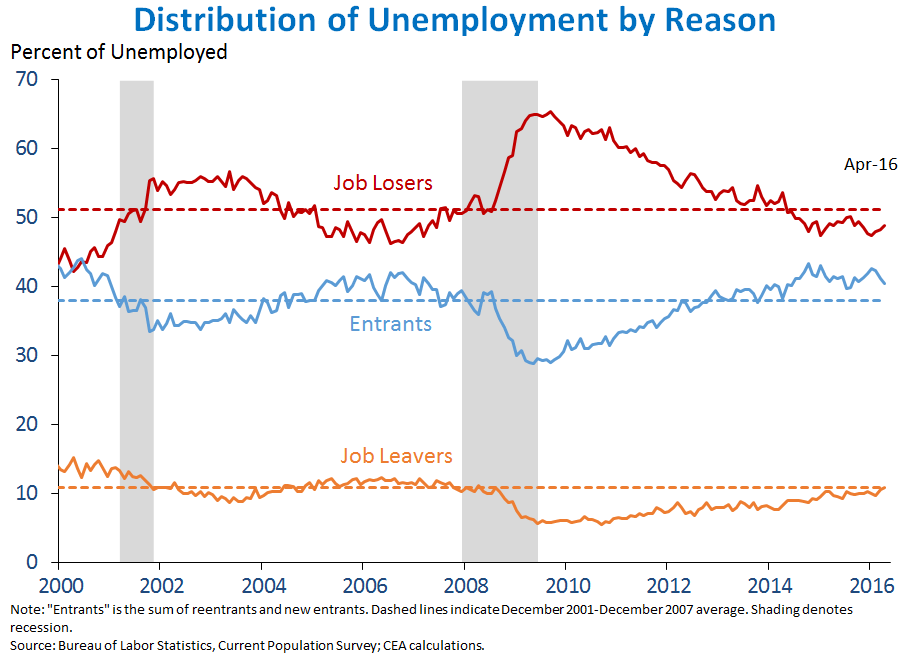 3. Two-thirds of States have seen their unemployment rates fall below their pre-recession averages. In April, the overall U.S. unemployment rate stood at 5.0 percent, half its Great Recession peak and below its pre-recession average of 5.3 percent. As shown in the chart below, there was extremely wide variation in the effect of the Great Recession on unemployment across States and the District of Columbia, with increases ranging from nearly 200 percent (Nevada) to just 13 percent (Alaska) of their respective 2001-2007 averages. As of March 2016, however, 34 States have seen their unemployment rates recover fully, with a number of States seeing unemployment rates substantially below their pre-recession averages (including Colorado, Michigan, New Hampshire, and Oregon). The seventeen States (and the District of Columbia) that still have elevated unemployment rates include the six States that saw the largest percentage increases in unemployment in the recession (Nevada, Florida, Alabama, Arizona, Delaware, and Rhode Island) and several energy-producing States (Wyoming, Montana, West Virginia, and Louisiana), where low energy prices have weighed on job growth in recent months. (Data on State-level employment and unemployment for each month are released by the Bureau of Labor Statistics several weeks after the release of data at the national level.) 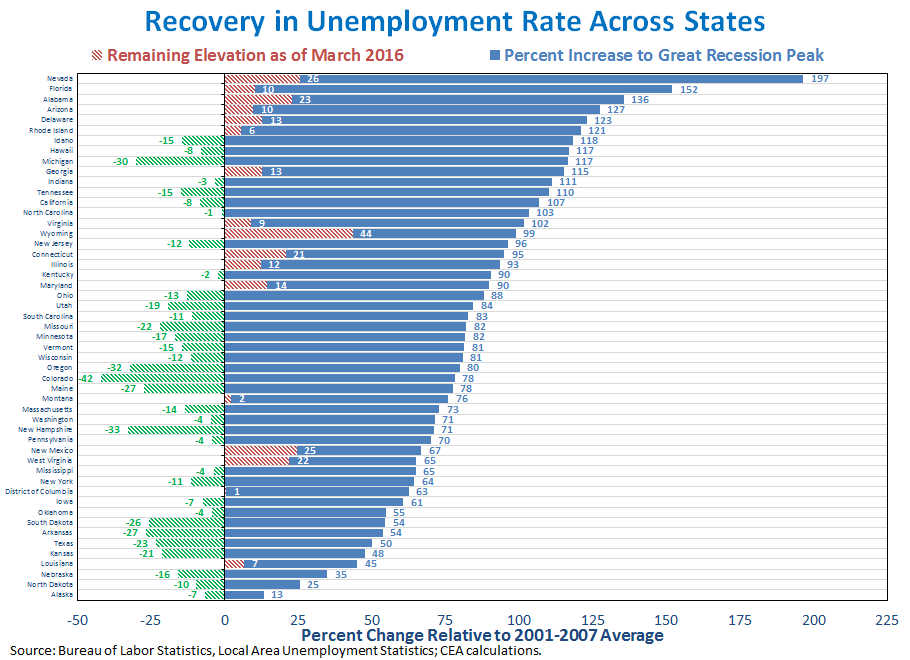 4. The “Beveridge curve”—the relationship between job vacancies and the unemployment rate—appears to have shifted outward in the recovery. Named for the British economist William Beveridge, the Beveridge curve plots the relationship between job vacancies and unemployment. Since higher unemployment is usually associated with a lower level of vacancies (and vice-versa), the curve is downward-sloping. While movements along the Beveridge curve indicate the position of the economy in the business cycle, shifts in the curve itself can be taken as an indicator of structural changes in the process by which workers are matched with jobs, among other trends. The figure below plots the Beveridge curve using data from the BLS Job Openings and Labor Turnover Survey (JOLTS) and the household survey. As can be seen, the Beveridge curve has shifted outwards since the end of the Great Recession, with a higher level of job openings for a given unemployment rate than was the case in the 2000s expansion. Some economists have suggested that this outward shift does not represent a fundamental change in the economy but is due instead to increases in online job search, which have lowered the cost to employers of posting and maintaining job vacancies. Other economists have raised concerns about workers’ ability to find or change jobs, which may have declined due to the rise in occupational licensing or to the potential growth of a skills mismatch between workers and jobs. In any case, the decline in the unemployment rate to below its pre-recession average has provided strong evidence against concerns from earlier in the recovery that the apparent shift out in the Beveridge curve represented a substantial increase in structural unemployment. 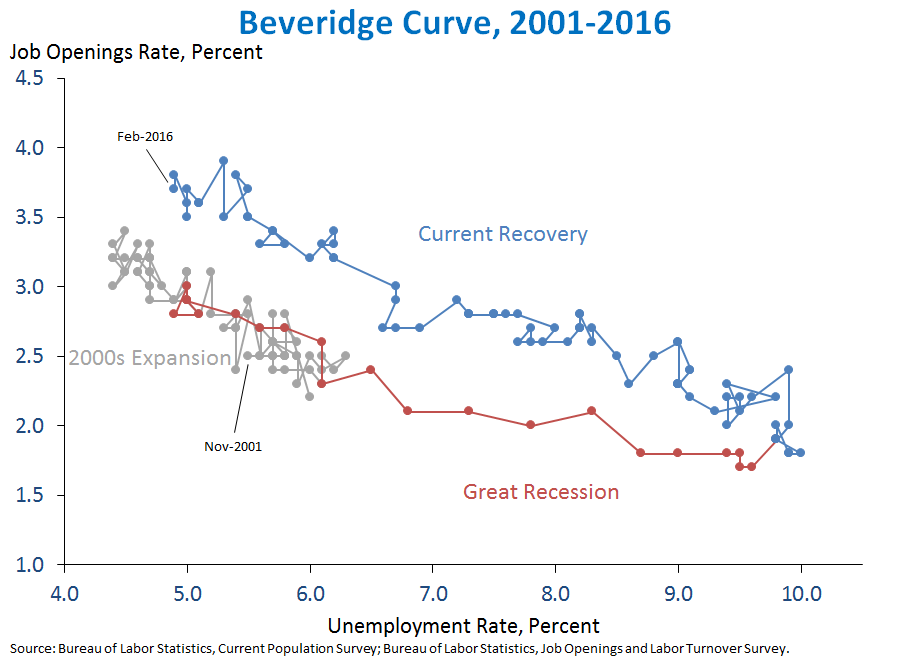 5. The distribution of job growth across industries in April was reasonably similar to recent trends, with manufacturing and mining still facing global headwinds but showing somewhat better growth in April compared to the past year. Above-average gains relative to the past year were seen in industries such as financial activities (+20,000), professional and business services (+56,000, excluding temporary help services), and private educational services (+16,000). On the other hand, several industries, including construction (+1,000), leisure and hospitality (+22,000), and retail trade (-3,000) saw noticeably weaker-than-average growth. Manufacturing posted a small increase in April (+4,000), while employment in mining and logging, which includes oil extraction, continued to decline (-8,000), though at a slower pace than in recent months. Both industries have seen cutbacks in recent months as a result of slow growth abroad and the decline in oil prices. Across the 17 industries shown below, the correlation between the most recent one-month percent change and the average percent change over the last twelve months was 0.89, in line with the average correlation over the last year. 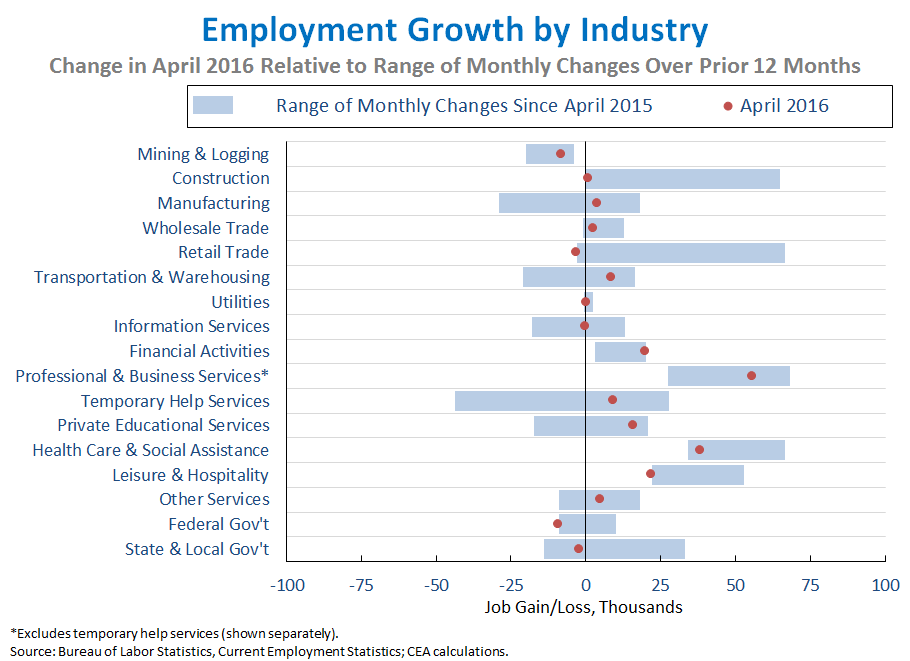