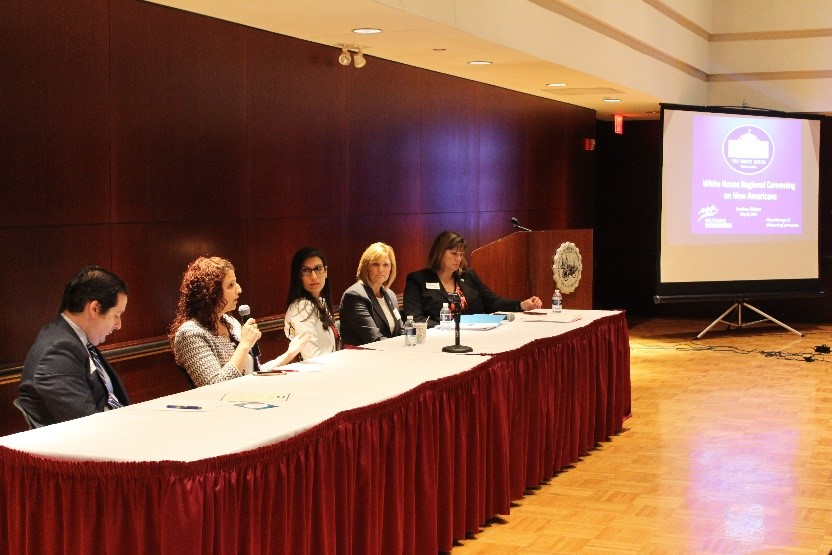 The Task Force on New Americans (Task Force), which President Obama created in 2014 to promote citizenship and the successful integration of immigrants and refugees into local communities, has been hosting regional convenings to strengthen its connection to good work taking place across the country.  Last week, we hosted the seventh Regional Convening on New Americans in Dearborn, Michigan. Given the strong history and diversity of immigrants and refugees in Dearborn, the Task Force believed it was important to travel there and hear about their efforts—and those of other communities across the State of Michigan—to assist in integrating and welcoming new Americans.  As a Michigan native, I was particularly gratified to attend this special convening and connect with community members who are doing excellent work in a sometimes challenging climate.

On May 13, the Task Force and the City of Dearborn, with the support of Mayor John O’Reilly, hosted over 70 community members, leaders, and government officials and agencies. Michigan is home to nearly 10 million residents, over six percent of whom are foreign-born, which means that 600,000 foreign-born residents (including much of my family) live in the state.  Notably, approximately 130,000 Michigan residents are lawful permanent residents who may be eligible for citizenship. Ensuring that community members are aware of the rights and responsibilities of citizenship as well as the opportunities that it affords is a key part of our Task Force’s efforts.

With such a substantial presence of foreign-born individuals, it is no surprise that cities and counties across Michigan are deliberate about welcoming immigrants and refugees into local communities and strive to provide the resources and services to help all community members thrive. I was born in Detroit to Bolivian parents and married in Dearborn to an immigrant from India, and I’m fiercely proud of the role that immigrants and refugees have played in Michigan’s history and success. I am proud to say that Michigan is one of the nation’s biggest leaders in creating welcoming communities.  Clinton Township, Detroit, Macomb County, and Sterling Heights are all a part of our Building Welcoming Communities Campaign. They, and other members of the Campaign, serve as models for communities who recognize that helping new Americans thrive contributes to helping all residents thrive.  And, these communities are committed to enhancing their efforts, particularly at a time of much public conversation about the impact of immigrants and refugees on our society.

Mayor O’Reilly kicked off the event by welcoming guests and framing the narrative of Dearborn’s history in Michigan. The program featured remarks from White House officials, including a video presentation of the President's Stand Stronger PSA that focused on encouraging the 8.8 million lawful permanent residence eligible to naturalize to take the next steps.  Representatives from the Michigan Office of New Americans, Macomb County, the City of Detroit, Global Detroit, and the National Network for Arab American Communities (a project of ACCESS) joined the opening panel “Strengthening Integration and Building Welcoming Communities Across Michigan.” Panelists focused on local efforts across the state to improve integration efforts, including addressing concerns about harassment and abuse of Arabs and Muslims.

During the breakout sessions, local leaders and federal government representatives discussed several key integration efforts, including workforce training and worker rights, fostering entrepreneurship, strengthening pathways to naturalization, language access, and harassment, particularly aimed at Muslim communities. These breakouts were lively discussions of best practices and strategies for improvement led by the U.S. Department of Labor, the Small Business Administration, U.S. Citizenship and Immigration Services, and the U.S. Department of Justice.

Following this convening, we also held a roundtable with community members and leaders to discuss ongoing challenges local communities in Michigan face. In coordination with the Arab Community Center for Economic and Social Services (ACCESS), I met with approximately 25 community members who are working to address issues facing immigrants and refugees in Michigan. I heard a range of concerns including challenges with refugees resettling, excitement over improvements to our immigration system, and worries about immigration enforcement. I am always grateful for the candor of community leaders who are willing to lend their voices to help make sure the Federal government does its job as effectively as possible.  One thing is clear: across communities of immigrants, natives of the U.S., people of color, and people of all faiths, Michigan leaders are working together to ensure the best outcomes for all residents, so that we might all thrive and succeed.

This kind of dialogue is hugely important to the Task Force on New Americans’ efforts. With over 50 cities and counties on board with the Building Welcoming Communities Campaign, we continue to encourage communities to answer President Obama’s call and build inclusive communities to advance civic, economic, and linguistic integration. Because as the President so eloquently said just a few months ago,

There’s no respite from our ideals.  All of us are called to live up to our expectations for ourselves -- not just when it’s convenient, but when it’s inconvenient.  When it’s tough.  When we’re afraid.  The tension throughout our history between welcoming or rejecting the stranger, it’s about more than just immigration.  It’s about the meaning of America, what kind of country do we want to be.  It’s about the capacity of each generation to honor the creed as old as our founding:  “E Pluribus Unum” -- that out of many, we are one.

For more information about the Task Force on New Americans and the Building Welcoming Communities Campaign visit obamawhitehouse.archives.gov/newamericans.