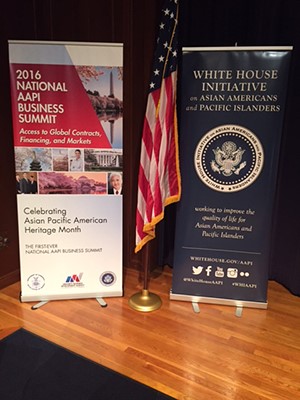 Note: This blog is a crosspost from MBDA.gov

Co-hosted by the Minority Business Development Agency (MBDA) at the Commerce Department, and White House Initiative on Asian Americans and Pacific Islanders (WHIAAPI), which is housed in the Department of Education, the day-long event drew more than 200 members of the AAPI business community, including entrepreneurs, policy makers, and business leaders. Speakers included Congressional representatives and Obama Administration officials who addressed a range of topics and policies focused on strengthening economic ties and creating growth opportunities.

The Summit provided a broad overview of Obama Administration economic development priorities affecting AAPI business owners – one of the fastest-growing populations in the United States. The program centered on solutions for business owners seeking to scale up enterprises, including expanding to overseas markets, accessing capital, and entering high-growth industries such as technology and other STEM-based sectors.

Nearly 2 million businesses are owned by Asian-Americans and Pacific Islanders nationwide, employing 3.6 million workers, and generating nearly $700 billion in revenue annually, according to the 2012 U.S. Census Bureau’s Survey of Business Owners.  In addition, Census Bureau research indicates that as the U.S. population becomes ‘majority minority’ by 2044, AAPI will represent a significant portion of America’s overall population.

The American business landscape, particularly in emerging industries that are increasingly driving global markets, is being remade by AAPI-owned enterprises, as well as other companies owned by other ethnic minorities.

For speakers at the summit, the fast-changing U.S. population and business environment presents both promise and challenges for AAPI founders and executives.

“We still face barriers on a number of fronts,” said Rep. Grace Meng (D-NY), who addressed the gathering.  “Access to capital remains a significant hurdle to many AAPI-owned businesses seeking loans from traditional lenders in the nation’s financial services industry.” 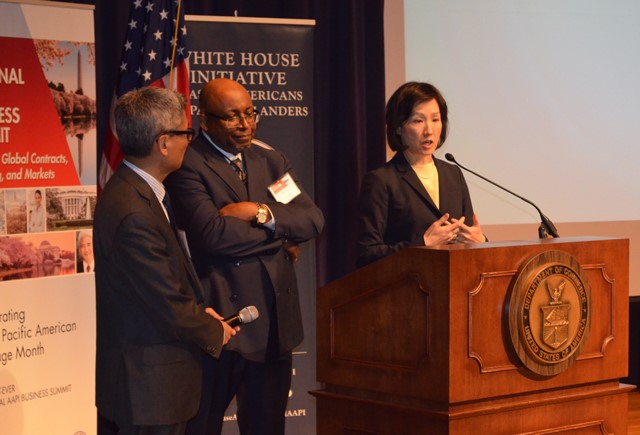 “Government input is turning the tide on key fronts by leveling the playing fields in intellectual property matters, and the simplifying patenting processes for inventors and entrepreneurs who do not have deep financial resources,” explained Michelle K. Lee, Under Secretary of Commerce for Intellectual Property and Director of the United States Patent and Trademark Office (USPTO).

“I advocate for a strong innovation ecosystem,” Lee said, adding that minority business owners are essential to the future of America’s economic strength.  “I’ve seen the system up close, and when it works right, it can be one of the strongest drivers of economic growth in the world … your involvement now and in the future is essential.”

“This issue is going to be transformational for our nation,” Castillo added. “We’re not going to be siloed any longer because [MBEs] are integral to the future of this nation.” 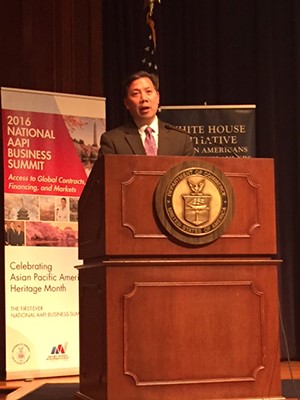 Chris Lu, Deputy Secretary of the U.S. Department of Labor, advocated for collaboration between the public and private sector on workforce and economic development issues.

“The Obama Administration has been exploring apprenticeships and related job-training options that have the potential to jump-start increased job growth in technology industries,” Lu said.

“I saw it at a meeting last year with leaders of tech companies in Silicon Valley.  Many of the managers I spoke with are looking for ways to fill the growing number of high tech jobs and are partnering with the city government and non-profits to train workers typically underrepresented for good paying jobs in the IT sector,” Lu explained. “I’ve also seen how collaboration can help immigrant communities. For example, in Dayton, Ohio, Mayor Nan Whaley’s Welcome Dayton initiative is a partnership among local government and business and civic leaders designed to help ‘new American’ families assimilate into their community.”

He added that these initiatives can be particularly beneficial to minority-owned companies, and to entrepreneurs in the process of building out enterprises.

Deputy Secretary Lu and Under Secretary Lee were among several top Administration officials and advisors who addressed the summit. The agenda also featured Bill Imada, Commissioner, President Advisory Commission on Asian Americans and Pacific Islanders, and Dr. Willie May, Under Secretary for Standards and Technology and Director, National Institute of Standards and Technology at the Commerce Department.  The Congressional briefing was provided by Rep. Grace Meng (D-NY) and Rep. Judy Chu (D-CA).

The Asia Pacific region is poised to become a significant creator of economic wealth worldwide in the 21st century. Federal policies to support business growth, including for AAPI businesses, are a key pillar that will ensure the economic security of the United States.

The first-ever AAPI Business Summit successfully demonstrated the ongoing cooperation between the U.S. Department of Commerce, MBDA, and the AAPI business community, one that will continue to strengthen the American economy now and for the future.