Financial inclusion in the United States

A large body of economic research has documented that in many areas of the economy it can be expensive to be poor, with low-income consumers paying more for everything from diapers to canned soup. Perhaps in no area is this more true than in finance. About 7 percent of American households lack access to a bank account (unbanked), while another 20 percent have a bank account but may supplement it with non-traditional financial services like check cashing or payday loans (underbanked).  Too many Americans do not get their basic financial needs met by traditional financial service providers.  By turning to alternative financial services, families often face substantial costs, including not only direct monetary ones but also lost economic opportunities. These costs disproportionately affect households with the fewest resources, according to an issue brief released today by the White House Council of Economic Advisers (CEA).

This is why the Administration has taken important steps to bolster financial inclusion and financial capability, from the Financial Inclusion Forum and myRA to working with the G-20 to increase financial inclusion across many countries. But other policies can help as well, such as addressing the digital divide via ConnectALL, which aims to connect 20 million more Americans by 2020. By accessing the Internet, more Americans will be able to take advantage of safe and affordable online payment, borrowing, and savings products.

Being unbanked or underbanked is costly—and disproportionately affects households with the fewest resources.

The unbanked pay anywhere from 1 to 5 percent in fees to cash a check. At an annual salary of $22,000, the average for unbanked households, these fees can total over $1,000 a year in extra costs. By contrast, annual fees for a low-balance checking account are typically a little over $100. Other services that many people take for granted, such as online bill pay, peer-to-peer transactions, and basic purchases are more costly and time consuming for consumers who lack a safe and affordable transaction account.  Families without access to safe and affordable transaction accounts or financial services are less likely to be able to finance investments in housing, education, or businesses, all of which can build long-term wealth and help families manage economic shocks. Research also suggests that access to banking services leads to other benefits as well, including better health, lower inequality, and greater entrepreneurship.

Financial inclusion has risen substantially over the last two decades across all demographics.

The good news is that financial inclusion has been on the rise across all demographics in the United States: in 2013, 93 percent of all U.S. households had a bank account, up from 86 percent in 1989. 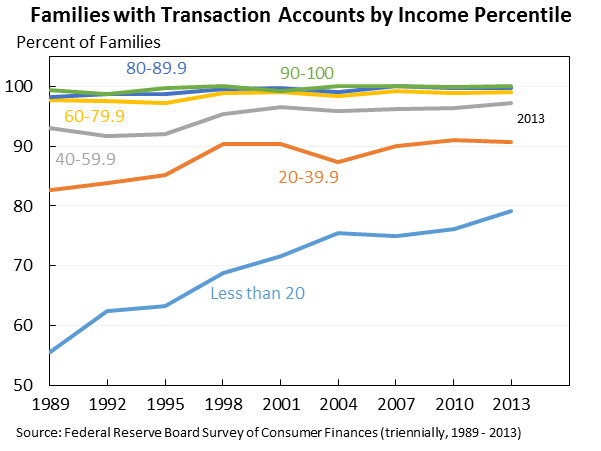 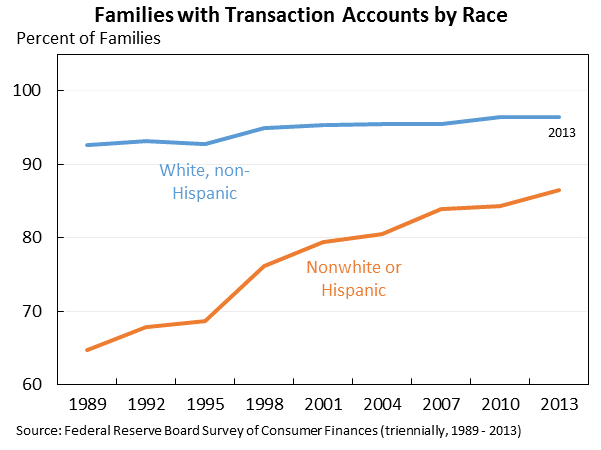 The financial technology, or “fintech,” industry has grown rapidly in recent years and may potentially increase access to safe and affordable financial services or the diversity of products offered.

While financial inclusion has increased significantly over the past twenty years, innovations in the financial industry may help build on these positive trends or allow consumers who already have bank accounts access innovative new products that can improve their overall financial health. In February 2016, there were over 2,000 U.S. fintech start-ups, up from 800 in April 2015, and fintech venture capital funding hit an all-time high in 2015. Some of these platforms may have the potential to reduce the cost of serving low- and moderate-income consumers, expanding access to safe and affordable products and decreasing the use of alternative financial services. The increasingly widespread use of smartphones may also allow consumers whose financial needs are not currently met to access financial services via mobile banking and other services: in 2015, 40 percent of the unbanked had a smartphone, as did 70 percent of underbanked individuals.

The rise in financial inclusion and fintech may partly reflect the increase in financial activity as a share of total economic activity in the United States in recent decades.

Academic research has linked increased financialization to higher levels of financial inclusion, and data from across many countries suggests a positive correlation between the two. But beyond a certain point, however, there are diminishing returns. Thus, while the financial sector plays an important role, an even larger financial sector will not necessarily lead to more financial inclusion. Indeed, the value added of the U.S. financial sector is at 7.1 percent of GDP in 2015, which is down modestly from its high of 7.7 percent in 2001 but substantially higher than its level in 1970 of 4.1 percent. 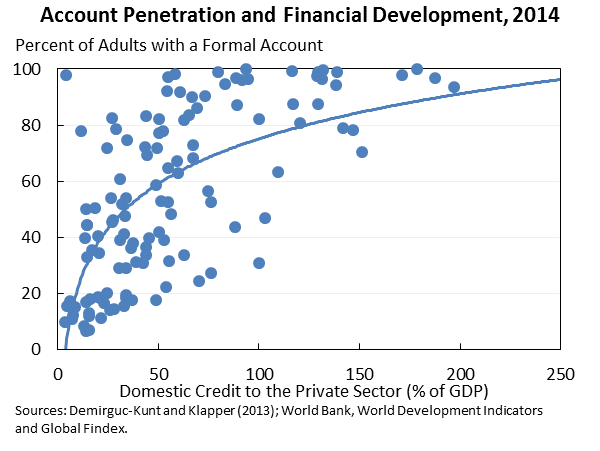