June 17, 2016 at 11:00 AM ET by Jason Furman
Twitter Facebook Email
Summary:
In light of Father’s Day, it is important to note the wide-ranging economic benefits of paid leave and flexible workplaces.

Over the past sixty years, the American labor force has changed dramatically. Women have entered the workforce in large numbers, have attained higher levels of education (even surpassing men in college enrollment), and have joined many occupations previously dominated by men. At the same time, men have taken on a larger share of household and childcare responsibilities. These trends have affected our economy in many ways, including making it more difficult for many individuals to balance working in a job and caring for a family.  As a result, about half of working parents report having turned down a job that they felt would conflict with family obligations. Because workers are increasingly taking these factors into consideration when choosing a job, work-family conflict may prevent them from choosing jobs best matched to their skills, and businesses may not be getting the most talented workers.

In light of Father’s Day, it is important to recognize the challenges that many working families face, both at home and in the workplace. This is why the Administration has strongly supported policies like paid leave and workplace flexibility that help families balance their professional and personal lives and that support robust economic growth.

Fathers are spending an increasing share of their time on child care responsibilities.

Over the past several decades, men have steadily increased the amount of time they spend on child care and household responsibilities. Fathers are more likely now than a decade ago to help bathe and diaper their children, to read to them, and to help them with homework.  Though women still spend a larger amount of time on these activities, the gap has narrowed significantly. 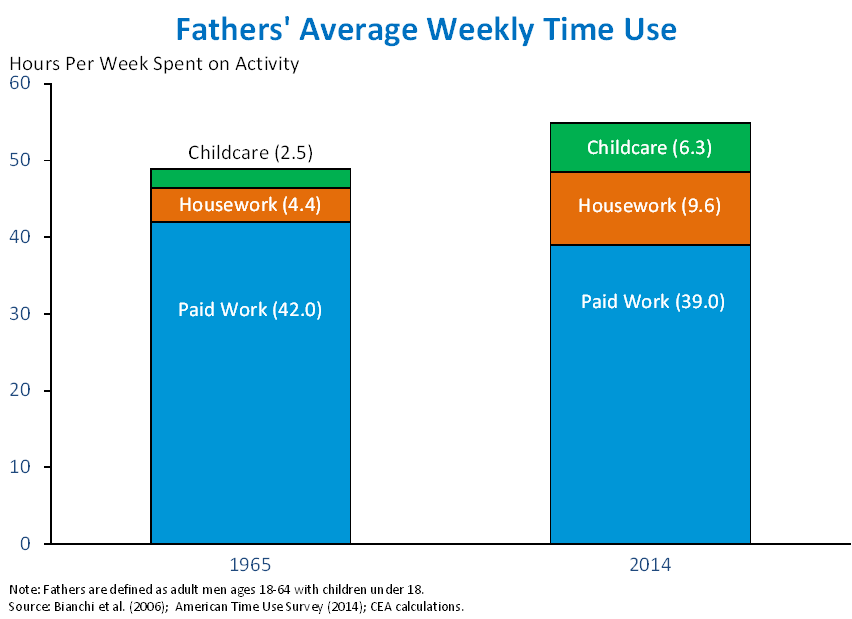 Women’s participation in the workforce and earnings have increased dramatically in recent decades.

While men are taking on more family responsibilities and reducing their paid work, women are increasingly attached to the labor market. From 1975 to 2015, prime- age women (those between the ages of 25 and 54) entered the job market at substantially higher rates, increasing their labor force participation by nearly 20 percentage points (from 55 percent to just below 75 percent). 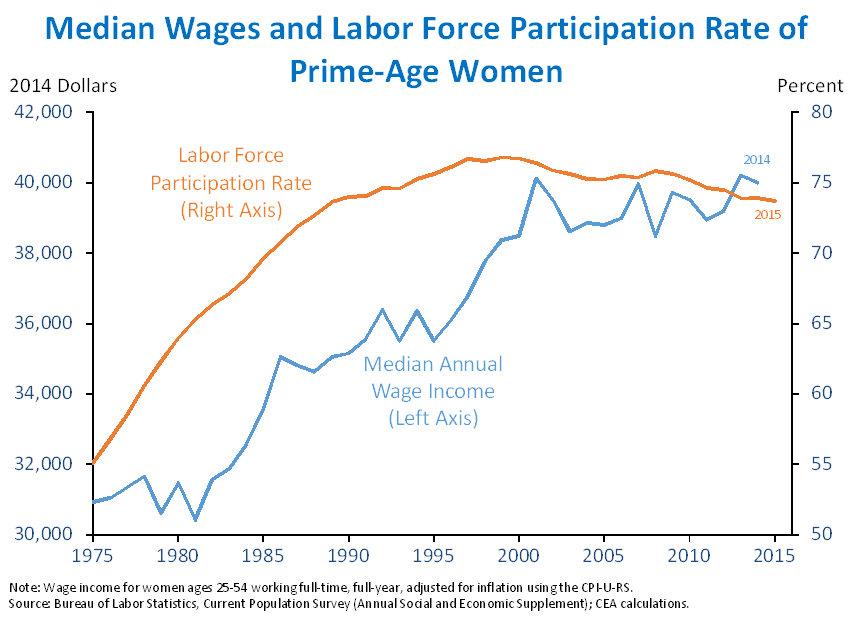 Alongside greater participation in the labor market for women has come higher earnings. As of 2014, median annual wage income for prime-age women working full-time year-round was $40,000, a real increase of 29 percent from 1975. These earnings gains have markedly increased the importance of women’s income in the household. More than 40 percent of mothers are now the sole or primary source of income for the household, reflecting both an increase in female-headed households and increased earnings among women who are secondary earners.

With the rise of two-earner families, balancing both work and family responsibilities has become more difficult, especially for fathers. 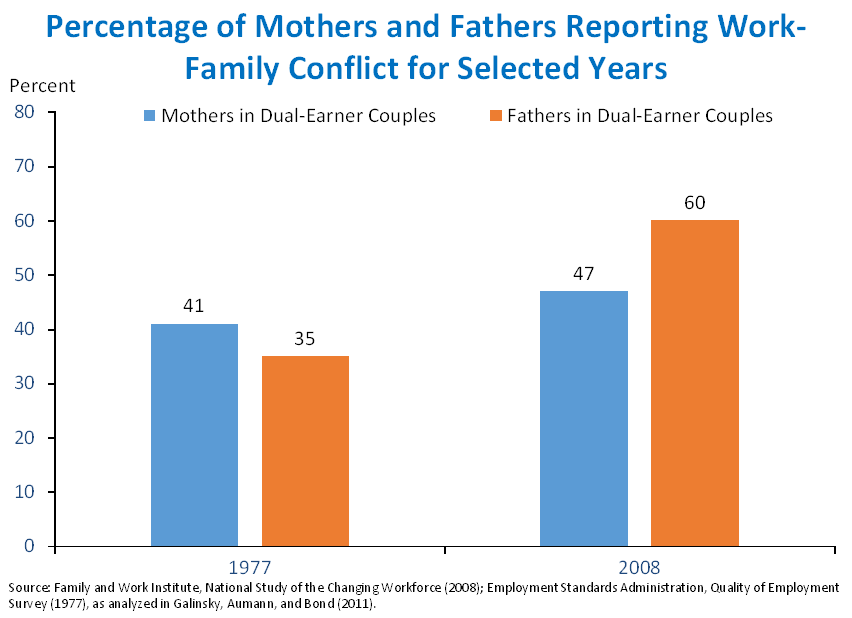 The need to balance both work and family obligations can create many challenges for families, sometimes forcing them to make difficult sacrifices. Couples with both work and child care responsibilities are more prone to greater absenteeism, lower productivity, and greater levels of stress. Some couples may even decide that it is best to have one parent drop out of the workforce altogether, despite wanting to continue working. These challenges are compounded by a lack of access to policies like paid family leave and workplace flexibility that help families manage both personal and professional responsibilities. For example, only 39 percent of workers report access to paid family leave for the birth of a child, with fathers slightly less likely than mothers to have access.

A large body of economic research shows that flexible and family-friendly workplaces provide benefits for workers, businesses, and the economy as a whole. For workers, paid leave and other policies allow them to choose the job best suited to their skills, without restrictions based on potential work-family conflict. Paid leave also increases the probability that a mother continues in her job after having a child, rather than quitting, facilitating her participation in the labor force. Men who have access to paid leave are much more likely to take it than those who can only access unpaid leave.

Paid leave policies can help businesses recruit talented workers, decrease turnover, and increase employee satisfaction. In a survey of 200 human resource managers, two-thirds cited family-supportive policies, including flexible schedules, as the single most important factor in attracting and retaining employees.  A study in California reported that mothers with one- to three-year old children who were offered paid leave tend to be more productive and committed upon returning to their firm, putting in an extra 3.5 to 6 hours of work per week. Over 90 percent of employers affected by California’s paid family leave initiative reported no noticeable effect or a positive effect on profitability, turnover, and morale.

By ensuring that parents can continue to participate in the workforce, helping create better matches between employees and firms, and boosting employee productivity, paid leave has meaningful benefits for our economy as a whole. That is why the Obama Administration has pushed for greater access to paid leave as one piece of a broader agenda to ensure robust economic growth that is widely shared among all American households. 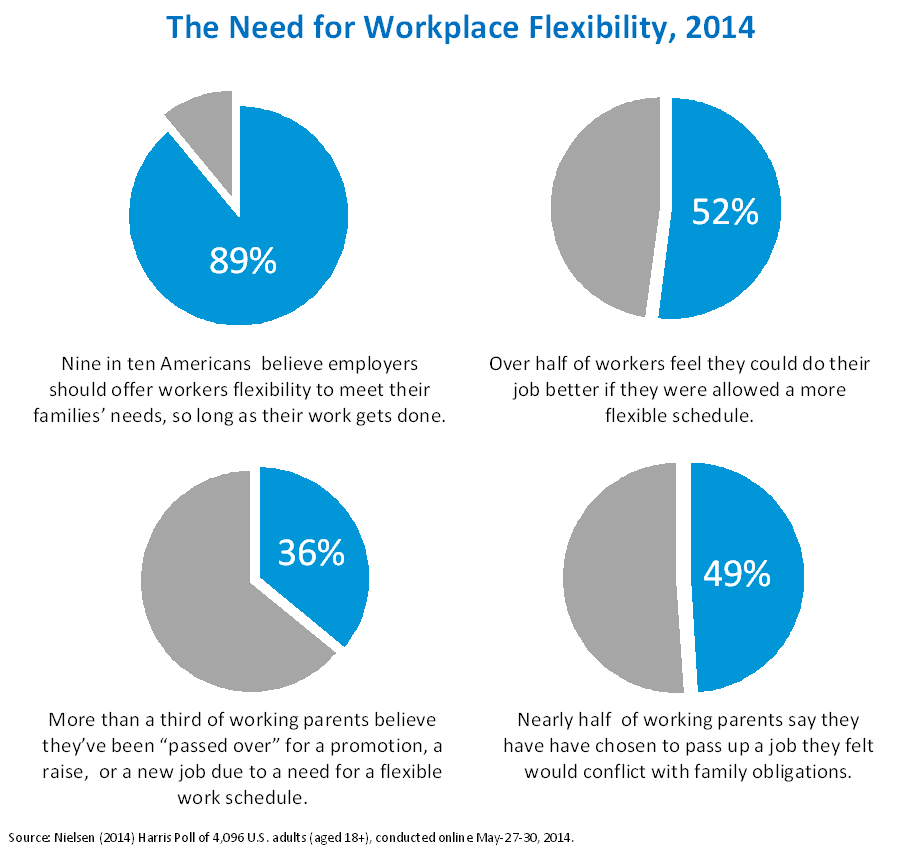