June 17, 2016 at 10:30 AM ET by Jason Furman, Laura Giuliano
Twitter Facebook Email
Summary:
The Bureau of Labor Statistics recently released the the most comprehensive and reliable look to date at occupational licensing in the United States.

Last month, the Bureau of Labor Statistics released its first-ever data on certification and licenses, providing the most comprehensive and reliable look to date at occupational licensing in the United States. In 2015, over 22 percent of U.S. workers held an occupational license at the State, Federal, or local level, while around 26 percent held a license or a certificate. While licensing and certification seek to ensure that workers have the necessary qualifications, especially for occupations impacting consumer safety and well-being, overly-broad application of licensing requirements can create costly and unnecessary barriers to entering a profession. Licensing can lead to higher wages for those able to obtain a license, but can also lead to inefficiency and unfairness, including reducing employment opportunities and depressing wages for excluded workers, reducing workers’ mobility across State lines, and increasing costs for consumers. To address these challenges, the Administration is collaborating with States to encourage reforms that reduce licensing burdens for workers, while continuing to safeguard the well-being of the public, in line with best practices for licensing. Today, the Department of Labor is investing $7.5 million in supporting efforts to increase the portability of licenses across State lines and reduce barriers to entering the labor market.

EIGHT FACTS ABOUT OCCUPATIONAL LICENSING IN 2015

1. Nearly one-quarter of U.S. workers require a license to do their jobs. According to the new data, 22.4 percent of workers hold an occupational license issued by a State, Federal, or local government, and a full 25.5 percent hold either a government license or a privately issued certification or both. The estimate of 22.4 percent licensed is slightly smaller, but broadly consistent, with estimates from other recent surveys. It is also consistent with research documenting the growth of licensing over the past several decades, which estimates that licensing has risen from about 5 percent of workers in the 1950s to about one-quarter of workers today. 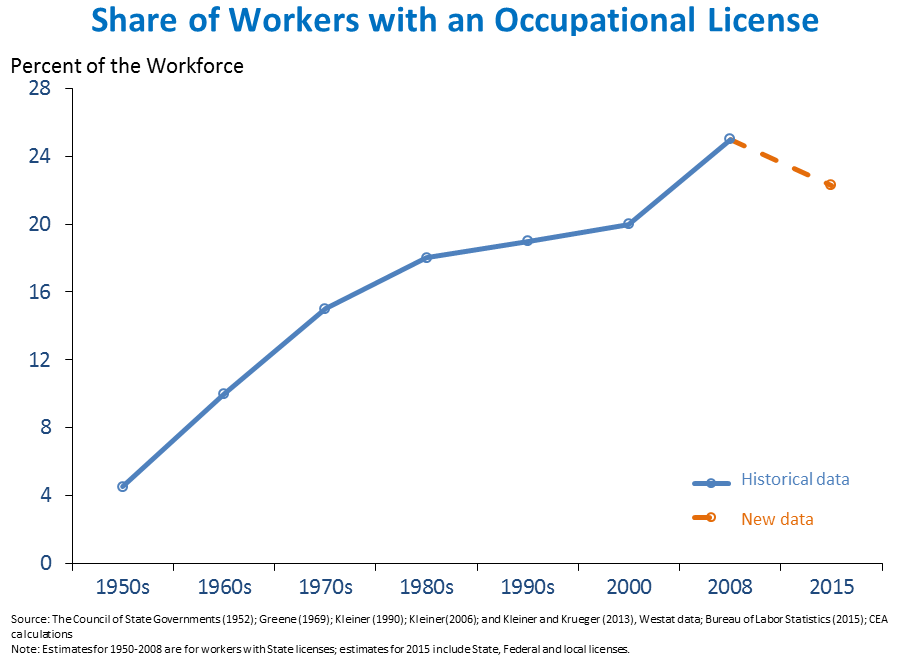 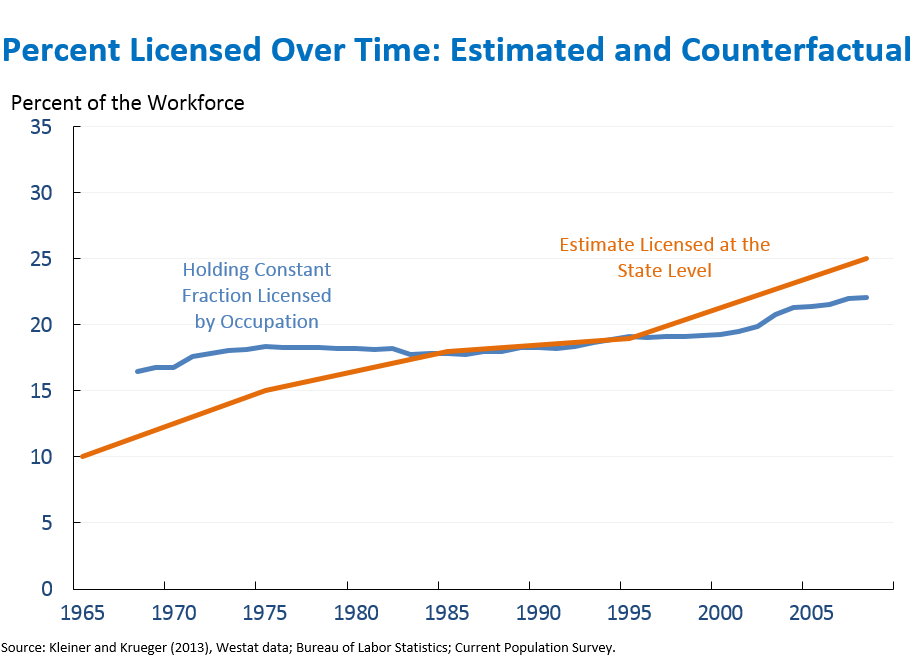 3. While licensing is more prevalent in high-income professions such as healthcare and law, it is common in many middle- and lower-income professions as well. Among middle- and lower-income occupations with median weekly earnings below $850 in 2015 (or about $44,000 annually), licensing is especially prevalent in services such as healthcare support (47 percent), protective services (38 percent), and personal care (28 percent). The costs of obtaining a license—which often include licensing fees, tuition, and lost wages while completing educational requirements—can be especially burdensome for low-income workers and may even prevent them from accessing certain occupations. 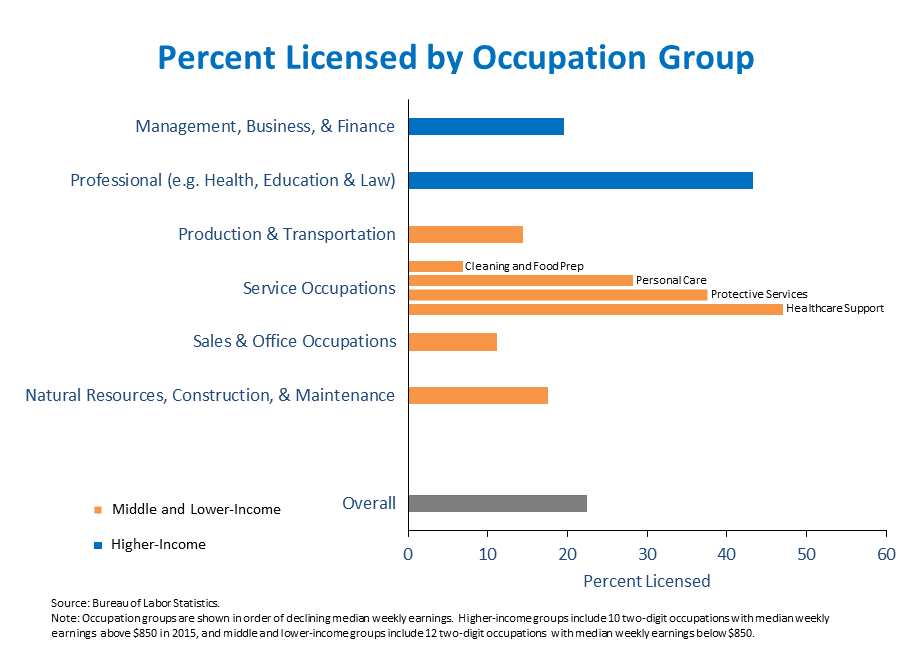 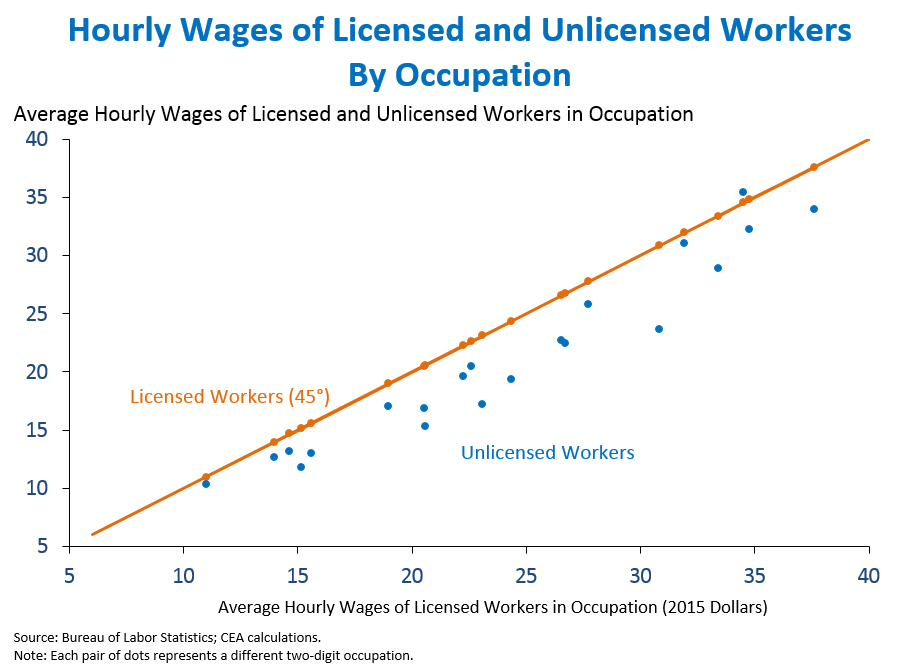 5. Licensing rates vary substantially across States, even among similar individuals working in the same occupations. The licensed fraction of a State’s workforce in the new data ranges from a low of around 18 percent to a high of over 30 percent. Some of this variation is attributable to differences in the occupational mix and other characteristics of States’ workforces (for example, States with higher proportions of workers in heavily-licensed areas like healthcare will likely have higher rates of licensing overall). However, CEA analysis shows that substantial variation remains even after adjusting for workers’ occupations and other characteristics observed in the data, including age, race education, and immigrant status. After accounting for these differences, the fraction of a State’s workforce that is licensed still ranges from roughly 19 percent to 29 percent. This suggests that much of the cross-State variation is due to policy differences that affect which jobs require a license. Previous research shows that even when States license the same occupations, their licensing requirements can differ substantially. Together, these patterns suggest that licensing policies do not always reflect a careful weighing of the costs and benefits and are not always well-tailored to job requirements. Since the release of the White House report and recommendations last year, legislators in 11 states have proposed 15 reforms in line with these recommendations, and four state bills have passed so far. 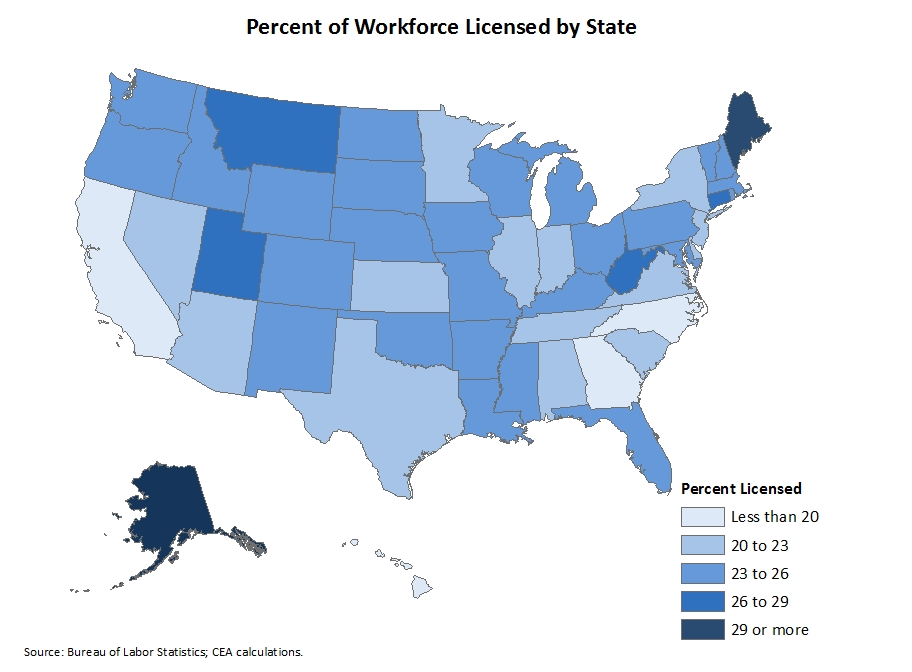 6. Workers who hold a license are less likely to move across State lines. Although licensed workers are no less likely to move to a new residence, they are 24 percent less likely to move to a new State when they do move, compared to unlicensed workers who are similar in age and educational attainment. In 2015, among all civilian workers who moved in the past year, fewer than 14 percent of licensed workers changed States, compared to 18 percent of comparable workers who did not hold a license. For workers in licensed professions, moving to a new State can entail—among other things— fulfilling new educational, training, or testing requirements, as well as paying fees in the absence of reciprocity agreements. This patchwork of licensing laws restricts worker mobility—which is costly not only for workers, but also for employers, consumers and the economy at large. 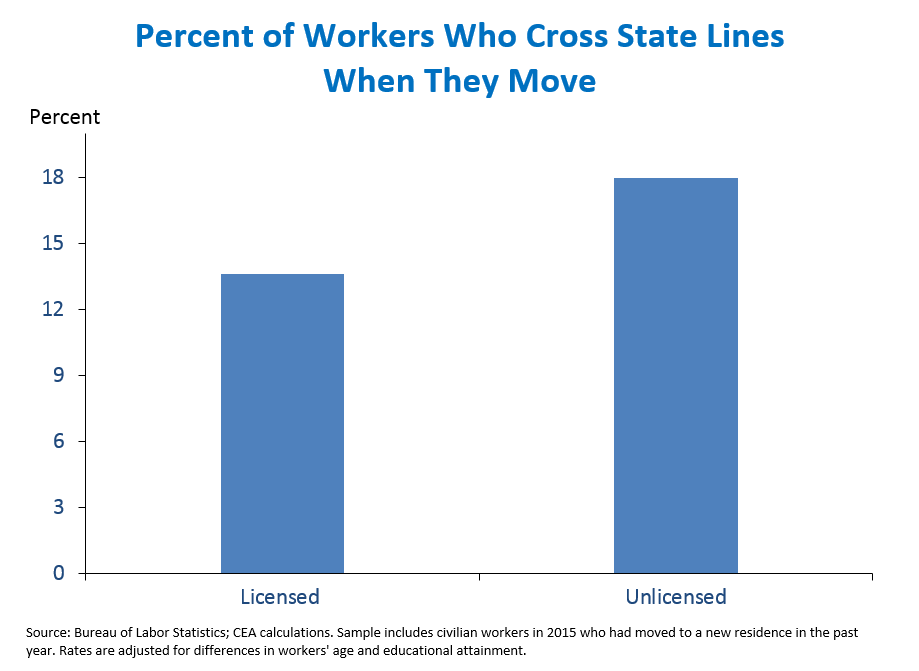 7. Immigrant workers are less likely to be licensed than workers born in the United States, and this difference is especially pronounced among more educated workers. Among workers with a bachelor’s degree or more, roughly 26 percent of immigrants hold a license, compared to around 35 percent of workers born in the United States. Immigrants must often complete duplicative and costly requirements to acquire a license, as the training or experience that they acquired overseas often does not count toward fulfilling the relevant licensing requirements in the United States. In addition, some licensing laws simply restrict eligibility to people who fall into certain immigration categories, such as citizens or permanent residents. These regulatory barriers make it hard for immigrants to find employment that makes full use of their training and deprives the U.S. market of their skills.  To help address this issue, the White House Task Force on New Americans will soon host a National Skills and Credential Institute to work with State and local leaders from 18 communities representing 17 States to help develop ways to facilitate licensing and credentialing for skilled immigrants. 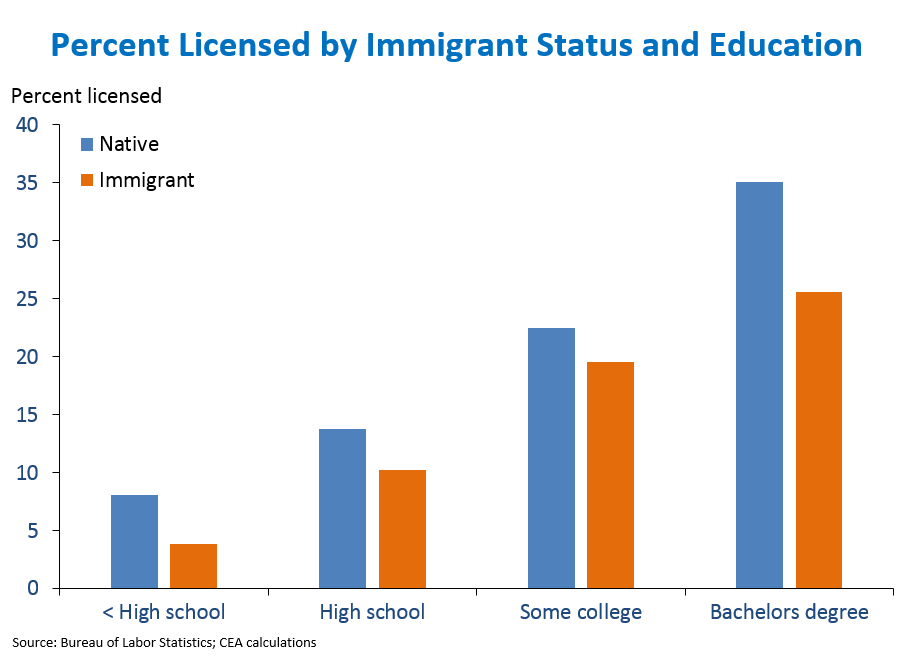 8. State licensing regulations pose particular challenges for military spouses, who tend to work in highly licensed professions and must often move across State lines. Among married civilian workers living with their spouse, those with a spouse in the Armed Forces are much more likely to move across State lines. In 2015, over 11 percent of these workers had moved to another State in the past year, compared to less than two percent of workers with civilian spouses. At the same time, military spouses are also more likely to work in heavily licensed occupations such as health and education, and are thus more likely to need a license to do their job. Recognizing that the existing patchwork of State licensing laws imposes excessive burdens on military families, in 2013, as part of their Joining Forces Initiative, First Lady Michelle Obama and Dr. Biden called on all States to streamline State licensing and credentialing for service members, veterans, and their spouses. 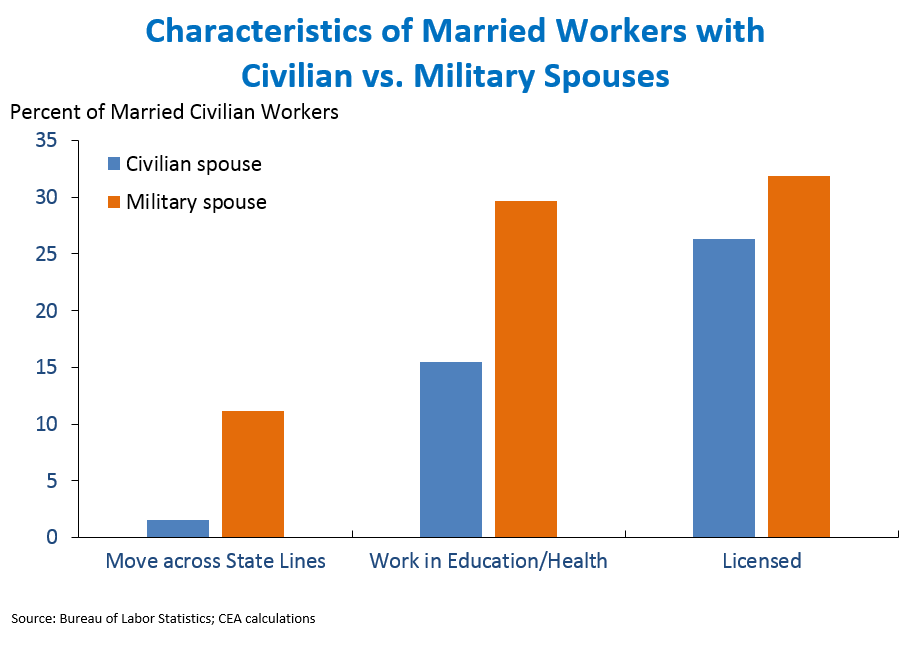