The ABA is one of the largest and most respected nonpartisan legal organizations in the country. With today's statement, the ABA joins a multitude of respected public leaders and legal experts from across the political spectrum who agree that Chief Judge Garland has a record of judicial excellence and should serve on the Supreme Court.

By giving him its highest rating, the American Bar Association confirms what we all know: Judge Garland should serve on the Supreme Court. 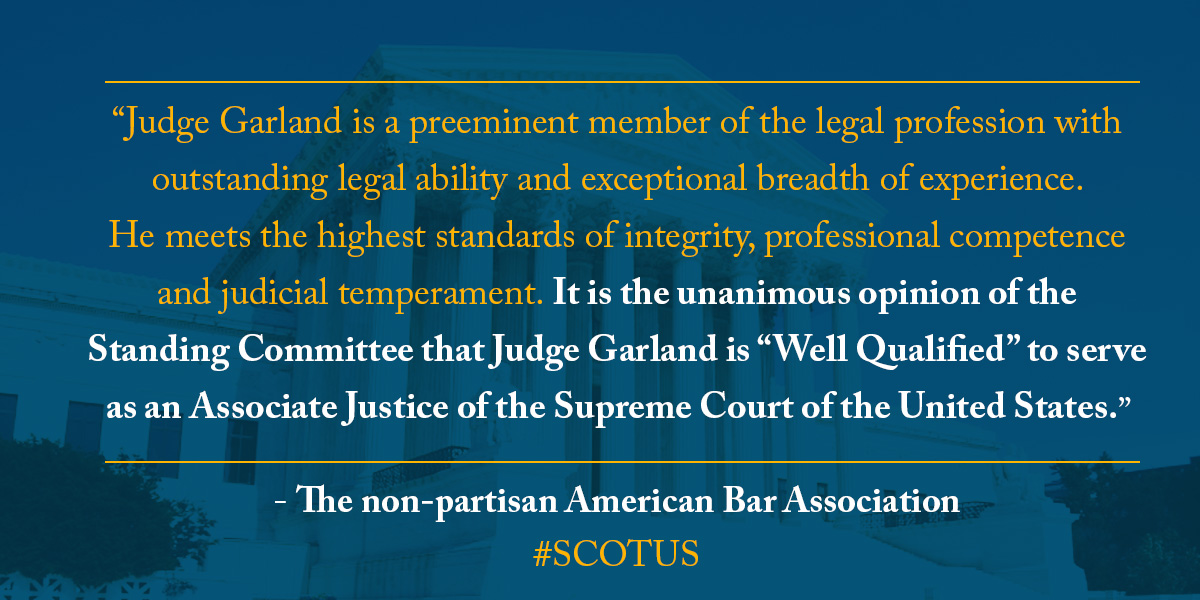 In the ABA's evaluation of Chief Judge Garland, it conducted interviews with hundreds of individuals in the legal profession and community who know Judge Garland. Here are some representative comments from those interviews:

“Judge Garland is a person of highest integrity, as reflected by his record of some 30 years of public service, including 19 years as Circuit Judge.”

“I do not know a finer person than Judge Garland. He is very solid, has the utmost integrity, and is a totally scrupulous, kind and generous person. It is hard to find a nicer person.”

“You cannot find anyone with greater personal integrity or anyone more dedicated to public service.”

“He exudes integrity and has an ideal judicial temperament, both on the bench and in his written work.”

“His analysis is always very thorough and he is known as someone who puts in long hours, typically about 10 hours a day. He is a perfectionist in his written work.”

“Judge Garland is obviously brilliant but lacks arrogance and that is refreshing. He deserves a well-qualified rating. What makes him ‘uniquely well qualified’ is that he has tried cases as both a prosecutor and as a defense attorney. It is an important qualification for service on the Supreme Court for an individual to have tried cases on both sides and to be comfortable dealing with the facts and the law from both perspectives. The fact that Judge Garland has tried real cases makes him unique. He writes thoroughly reasoned opinions whether you agree with them or not.”

“Judge Garland has the attributes that would make him a superb Justice. He is remarkably intelligent, fair-minded and dedicated to the public good. He has a background that superbly equips him for the Court - a distinguished academic record, significant experience in private practice and exemplary service in the Department of Justice. His decisions as a judge on the DC Circuit call to mind the record of the legendary Judge Friendly on the Second Circuit, and that is remarkably high praise, indeed.”

“He is a true jurist and I wish there were more judges like him.”

“It would be hard to imagine anyone who is better qualified on any metric. He has the perfect temperament for a judge; in fact, I do not believe you can find a person with a better temperament. He is extremely careful in analyzing issues and writing opinions, always producing carefully written, thoughtful and insightful opinions. I am proud of the President for naming someone who was not giving him any political points. He simply picked the best possible candidate.”

“He does not have an agenda. He follows the law. He applies the law to the facts.”

“I have been especially impressed by his graciousness and how he counsels other judges.”

Today's statement from the American Bar Association comes 97 days after President Obama nominated Chief Judge Garland to the Supreme Court. It's long past time for the Senate to uphold its responsibility and consider Judge Garland's nomination.

The ABA unanimously gave Garland its highest rating. It's shameful that Senate Rs won't even give him a hearing. https://t.co/pzhH5mG7SO

As Press Secretary Josh Earnest said: "There is no question that the Senate has abdicated its responsibility under the Untied States Constitution. Since 1975, the average period of time for nomination by a president to confirmation by the Senate for a Supreme Court nominee has been 67 days. We're now approaching day 100. It's long past time for Senate Republicans to do their job and consider Chief Judge Garland's nomination."