Letters to the President: Reflections on Growing Up as Muslim Americans

July 6, 2016 at 1:23 PM ET by Tanya Somanader
Twitter Facebook Email
Summary:
In celebration of Eid al-Fitr, read a few letters to the President from Muslim Americans across the country.

Today, Muslims in America and around the world are breaking fast and celebrating the end of Ramadan with family and friends. President Obama offered the following statement:

Upon the arrival of a new crescent moon, Michelle and I send our warmest greetings to all those celebrating Eid al-Fitr in the United States and around the globe.

For Muslim Americans, Eid is an opportunity to reflect on the 30 days spent fasting and to recommit to values of gratitude, compassion, and generosity. In neighborhoods and homes across the world, this special occasion begins in the early hours of the day when families dress in their finest attire in preparation for prayers and festivities. Homes are decorated with ornaments and lanterns. Gifts are wrapped and envelopes of money are prepared for kids. Above all, Eid is a time to gather and celebrate with loved ones.

Muslim Americans are as diverse as our nation itself—black, white, Latino, Asian, and Arab. Eid celebrations around the country remind us of our proud history as a nation built by people of all backgrounds; our history of religious freedom and civil liberties, and our history of innovation and strength. These legacies would not be possible without the contributions of Muslim Americans that make our country even stronger.

This past month, our country and the world endured challenges and senseless violence that broke our hearts and tried our souls. Our prayers are with the hundreds of innocent lives, many of them Muslim, taken during the month of Ramadan in places like Orlando, Istanbul, Dhaka, Baghdad, and Medina.

Here at home, we’ve also seen a rise in attacks against Muslim Americans. No one should ever feel afraid or unsafe in their place of worship. Many Americans have shared in the experience of Ramadan by volunteering in community service efforts to assist those in need and even fasting a few days with their fellow Muslim American co-workers. In the face of hate, it’s our American values and strength that bring us together to stand in solidarity and protect one another—thereby, making our Nation stronger and safer.

From our family to yours, Eid Mubarak!

The celebration of Eid al-Fitr is just one of the many cultural and religious traditions with which Muslim Americans enrich our communities. Unfortunately, the current political environment often leaves many feeling targeted for who they are or what they believe. On this Eid al-Fitr, read a few letters from Muslim Americans who shared their pride, concerns, and hopes as Americans with the President: 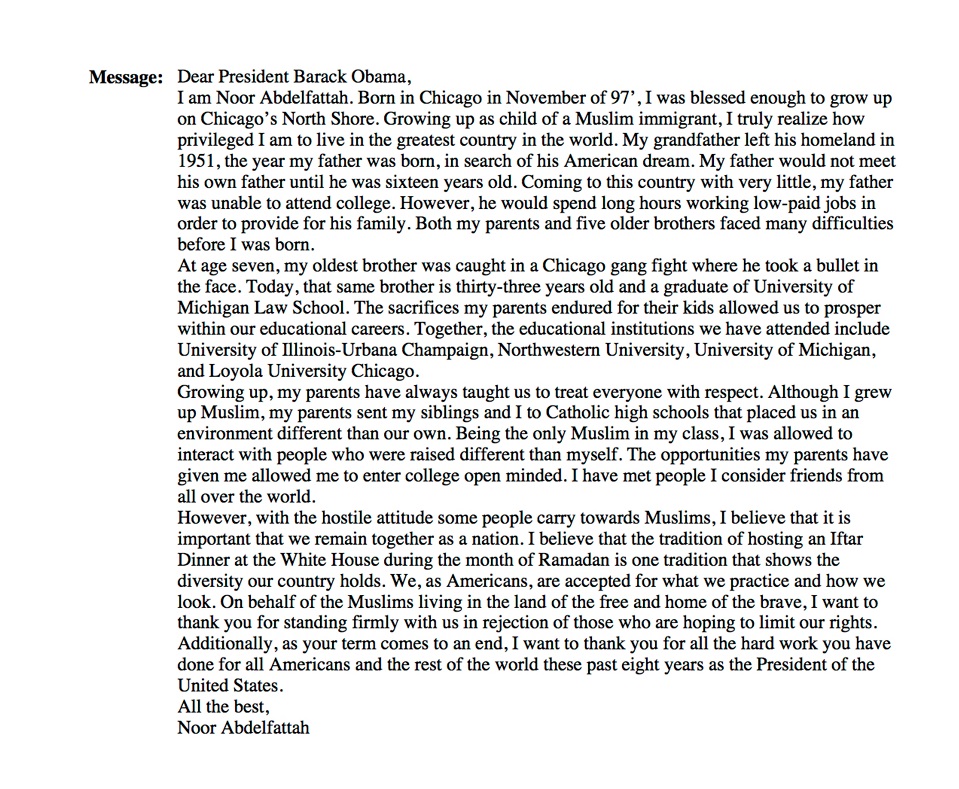 I am Noor Abdelfattah. Born in Chicago in November of 97’, I was blessed enough to grow up on Chicago’s North Shore. Growing up as child of a Muslim immigrant, I truly realize how privileged I am to live in the greatest country in the world. My grandfather left his homeland in 1951, the year my father was born, in search of his American dream. My father would not meet his own father until he was sixteen years old. Coming to this country with very little, my father was unable to attend college. However, he would spend long hours working low-paid jobs in order to provide for his family. Both my parents and five older brothers faced many difficulties before I was born.

At age seven, my oldest brother was caught in a Chicago gang fight where he took a bullet in the face. Today, that same brother is thirty-three years old and a graduate of University of Michigan Law School. The sacrifices my parents endured for their kids allowed us to prosper within our educational careers. Together, the educational institutions we have attended include University of Illinois-Urbana Champaign, Northwestern University, University of Michigan, and Loyola University Chicago.

Growing up, my parents have always taught us to treat everyone with respect. Although I grew up Muslim, my parents sent my siblings and I to Catholic high schools that placed us in an environment different than our own. Being the only Muslim in my class, I was allowed to interact with people who were raised different than myself. The opportunities my parents have given me allowed me to enter college open minded. I have met people I consider friends from all over the world.

However, with the hostile attitude some people carry towards Muslims, I believe that it is important that we remain together as a nation. I believe that the tradition of hosting an Iftar Dinner at the White House during the month of Ramadan is one tradition that shows the diversity our country holds. We, as Americans, are accepted for what we practice and how we look. On behalf of the Muslims living in the land of the free and home of the brave, I want to thank you for standing firmly with us in rejection of those who are hoping to limit our rights. Additionally, as your term comes to an end, I want to thank you for all the hard work you have done for all Americans and the rest of the world these past eight years as the President of the United States. 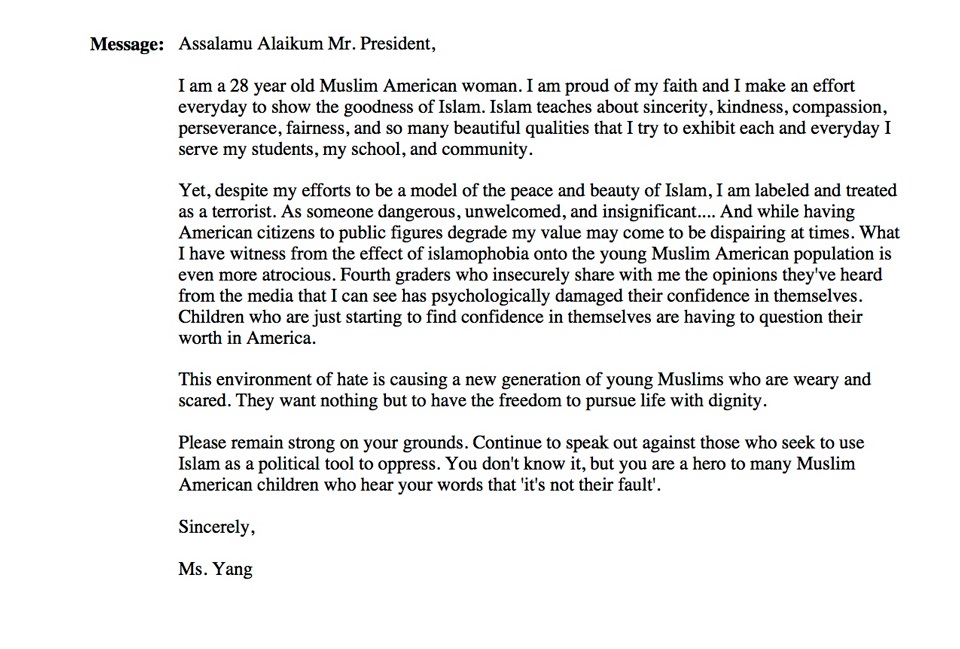 I am a 28 year old Muslim American woman. I am proud of my faith and I make an effort everyday to show the goodness of Islam. Islam teaches about sincerity, kindness, compassion, perseverance, fairness, and so many beautiful qualities that I try to exhibit each and everyday I serve my students, my school, and community.

Yet, despite my efforts to be a model of the peace and beauty of Islam, I am labeled and treated as a terrorist. As someone dangerous, unwelcomed, and insignificant…. And while having American citizens to public figures degrade my value may come to be dispairing at times. What I have witness from the effect of islamophobia onto the young Muslim American population is even more atrocious. Fourth graders who insecurely share with me the opinions they’ve heard from the media that I can see has psychologically damaged their confidence in themselves. Children who are just starting to find confidence in themselves are having to question their worth in America.

This environment of hate is causing a new generation of young Muslims who are weary and scared. They want nothing but to have the freedom to pursue life with dignity.

Please remain strong on your grounds. Continue to speak out against those who seek to use Islam as a political tool to oppress. You don’t know it, but you are a hero to many Muslim American children who hear your words that ‘it’s not their fault’. 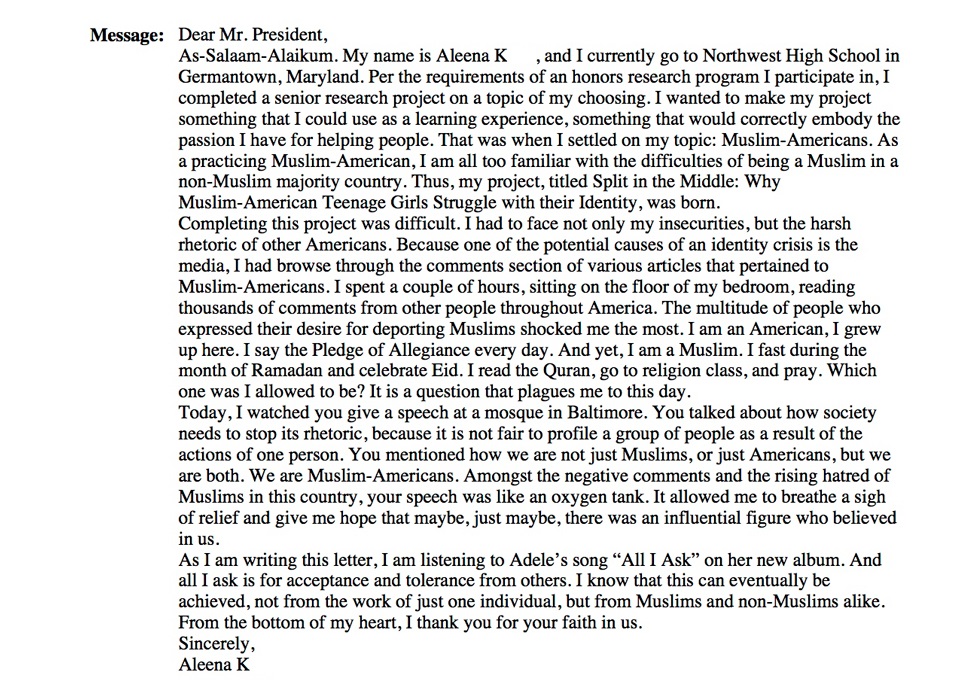 As-Salaam-Alaikum. My name is Aleena K    , and I currently go to Northwest High School in Germantown, Maryland. Per the requirements of an honors research program I participate in, I completed a senior research project on a topic of my choosing. I wanted to make my project something that I could use as a learning experience, something that would correctly embody the passion I have for helping people. That was when I settled on my topic: Muslim-Americans. As a practicing Muslim-American, I am all too familiar with the difficulties of being a Muslim in a non-Muslim majority country. Thus, my project, titled Split in the Middle: Why Muslim-American Teenage Girls Struggle with their Identity, was born.

Completing this project was difficult. I had to face not only my insecurities, but the harsh rhetoric of other Americans. Because one of the potential causes of an identity crisis is the media, I had browse through the comments section of various articles that pertained to Muslim-Americans. I spent a couple of hours, sitting on the floor of my bedroom, reading thousands of comments from other people throughout America. The multitude of people who expressed their desire for deporting Muslims shocked me the most. I am an American, I grew up here. I say the Pledge of Allegiance every day. And yet, I am a Muslim. I fast during the month of Ramadan and celebrate Eid. I read the Quran, go to religion class, and pray. Which one was I allowed to be? It is a question that plagues me to this day.

Today, I watched you give a speech at a mosque in Baltimore. You talked about how society needs to stop its rhetoric, because it is not fair to profile a group of people as a result of the actions of one person. You mentioned how we are not just Muslims, or just Americans, but we are both. We are Muslim-Americans. Amongst the negative comments and the rising hatred of Muslims in this country, your speech was like an oxygen tank. It allowed me to breathe a sigh of relief and give me hope that maybe, just maybe, there was an influential figure who believed in us.

As I am writing this letter, I am listening to Adele’s song “All I Ask” on her new album. And all I ask is for acceptance and tolerance from others. I know that this can eventually be achieved, not from the work of just one individual, but from Muslims and non-Muslims alike. From the bottom of my heart, I thank you for your faith in us.