The Way Forward In Reentry

As law enforcement agencies and community organizations team up across the country to reduce crime, expand opportunity and revitalize our neighborhoods, it is increasingly clear that a crucial part of that work is helping people returning from our prisons and jails make a successful transition back to their families and communities.  With more than 600,000 individuals leaving state and federal prisons each year and more than 11 million cycling through local jails, reentry is a process with enormous implications for communities across the United States and for all of us who care about making sure that we create opportunity for everyone who is able to contribute.  If handled the right way, reentry policy can lead to lower crime, stronger families and more prosperous communities.  If handled poorly – or if ignored altogether – a failure to ensure successful reentry can deepen the cycles of poverty, criminality and incarceration that prevent too many of our neighborhoods from reaching their full potential.

This administration has been dedicated to improving reentry outcomes since President Obama took office in 2009.  In the years since, the White House, the Department of Justice and agencies across the federal government have worked tirelessly to strengthen our reentry infrastructure in a number of ways.  For example, the president’s criminal justice reform agenda includes a number of reentry initiatives, some of which were highlighted in the department’s National Reentry Week in April.  And the Departments of Justice and Labor are funding innovative projects that support hundreds of adult and youth reentry programs across the country. 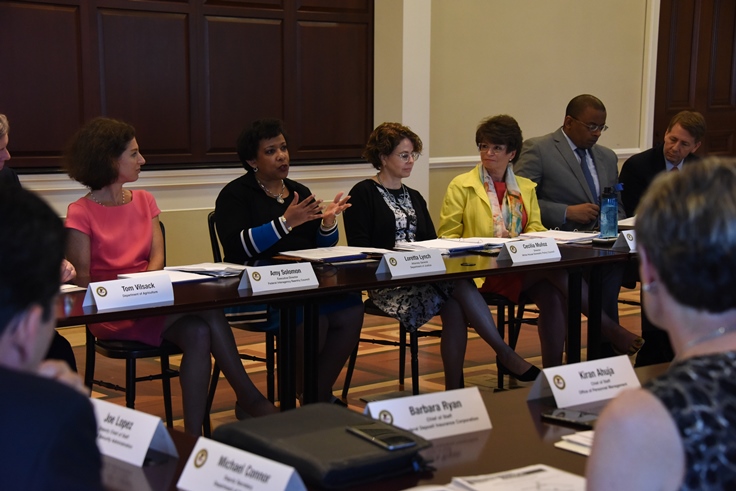 To build on these efforts, President Obama recently signed a memorandum formally establishing the Federal Interagency Reentry Council, which we are proud to chair together.  The president’s action officially charters an effort that started in January of 2011, when former Attorney General Eric Holder convened federal agency heads to address reentry in a more comprehensive fashion.  The distance we have come in those five-and-a-half years is remarkable.  We have opened doors to employment for returning citizens by launching the White House Fair Chance Business Pledge, an effort aimed at eliminating barriers to reentry and employment, including “ban the box” initiatives that delay questions about criminal history until an appropriate point in the hiring process.  We have expanded access to educational opportunities through programs like Second Chance Pell, which makes some federal inmates eligible for college funding.  And we are working to reduce the thousands of secondary consequences triggered by a criminal record – from trouble getting student loans to barriers to voting – restrictions that too often penalize those who have been in prison long after they have served their sentences.

Today, we held the first meeting of the newly-chartered Reentry Council, and we took even more promising steps forward.  Led by the council’s Executive Director Amy Solomon, we discussed a number of recent accomplishments, evaluated ongoing activities and discussed a promising way forward.  The White House gave an overview of the Fair Chance Business Pledge and the Higher Education Pledge, which enlists private-sector organizations and colleges and universities in providing individuals a fair chance to participate in the American economy.  The Office of Personnel Management discussed how their new proposed rule will “ban the box” for federal hires, delaying inquiries about an applicant’s criminal history until a conditional offer is made.  The Department of Education described its Beyond the Box initiative to give justice-involved individuals access to postsecondary educational opportunities.  The Department of Health and Human Services highlighted new guidance that extends Medicaid coverage to residents of community halfway houses, which will help as many as 100,000 people.  And the Department of Justice showcased the Bureau of Prisons’ Roadmap to Reentry, a strategic blueprint for reentry planning in the federal prison system released in the spring.  The department also highlighted new rules soon to be published in the Federal Register that will give people who are incarcerated, often victims of crime and trauma themselves, access to federally-funded victim services.

In his memorandum, President Obama wrote that “America is a nation of second chances.”  But for too many Americans involved with the justice system, those second chances never appear.  That’s a status quo we cannot afford to accept.  It is too damaging to those leaving prison; too harmful to the families and communities to which they’re returning; and too costly to the nation, which depends upon the skills and talents of all its people.  With the creation of the Federal Interagency Reentry Council, and the help of our dedicated partners throughout the United States, we’re beginning to change that status quo, to create more second chances and to build a brighter future for all.