Today, President Obama laid out the progress we've made on health care in the latest edition of the Journal of the American Medical Association.

In his paper, "United States Health Care Reform: Progress to Date and Next Steps," the President assessed the ways that the Affordable Care Act has improved our health care system, from expanding and improving coverage to reforming our health care delivery system.

Check out some of the highlights below.

The decision that led to health care reform:

"Beyond these initial actions, I decided to prioritize comprehensive health reform not only because of the gravity of these challenges but also because of the possibility for progress. Massachusetts had recently implemented bipartisan legislation to expand health insurance coverage to all its residents. Leaders in Congress had recognized that expanding coverage, reducing the level and growth of health care costs, and improving quality was an urgent national priority. At the same time, a broad array of health care organizations and professionals, business leaders, consumer groups, and others agreed that the time had come to press ahead with reform. Those elements contributed to my decision, along with my deeply held belief that health care is not a privilege for a few, but a right for all. After a long debate with well-documented twists and turns, I signed the ACA on March 23, 2010."

How the ACA has expanded and improved coverage:

"The ACA has succeeded in sharply increasing insurance coverage. Since the ACA became law, the uninsured rate has declined by 43%, from 16.0% in 2010 to 9.1% in 2015, with most of that decline occurring after the law’s main coverage provisions took effect in 2014 (Figure 18-10). The number of uninsured individuals in the United States has declined from 49 million in 2010 to 29 million in 2015. This is by far the largest decline in the uninsured rate since the creation of Medicare and Medicaid 5 decades ago." 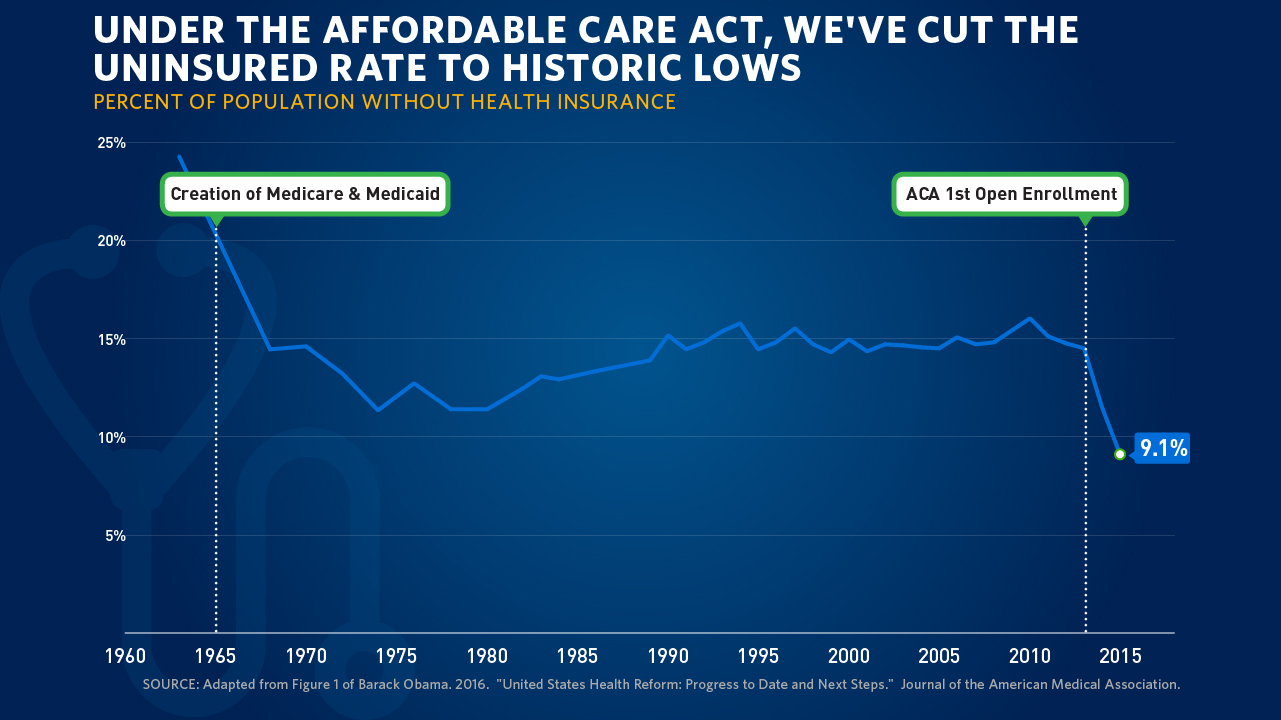 "Each of the law’s major coverage provisions—comprehensive reforms in the health insurance market combined with financial assistance for low- and moderate-income individuals to purchase coverage, generous federal support for states that expand their Medicaid programs to cover more low-income adults, and improvements in existing insurance coverage—has contributed to these gains. States that decided to expand their Medicaid programs saw larger reductions in their uninsured rates from 2013 to 2015, especially when those states had large uninsured populations to start with (Figure 223). However, even states that have not adopted Medicaid expansion have seen substantial reductions in their uninsured rates, indicating that the ACA’s other reforms are increasing insurance coverage." 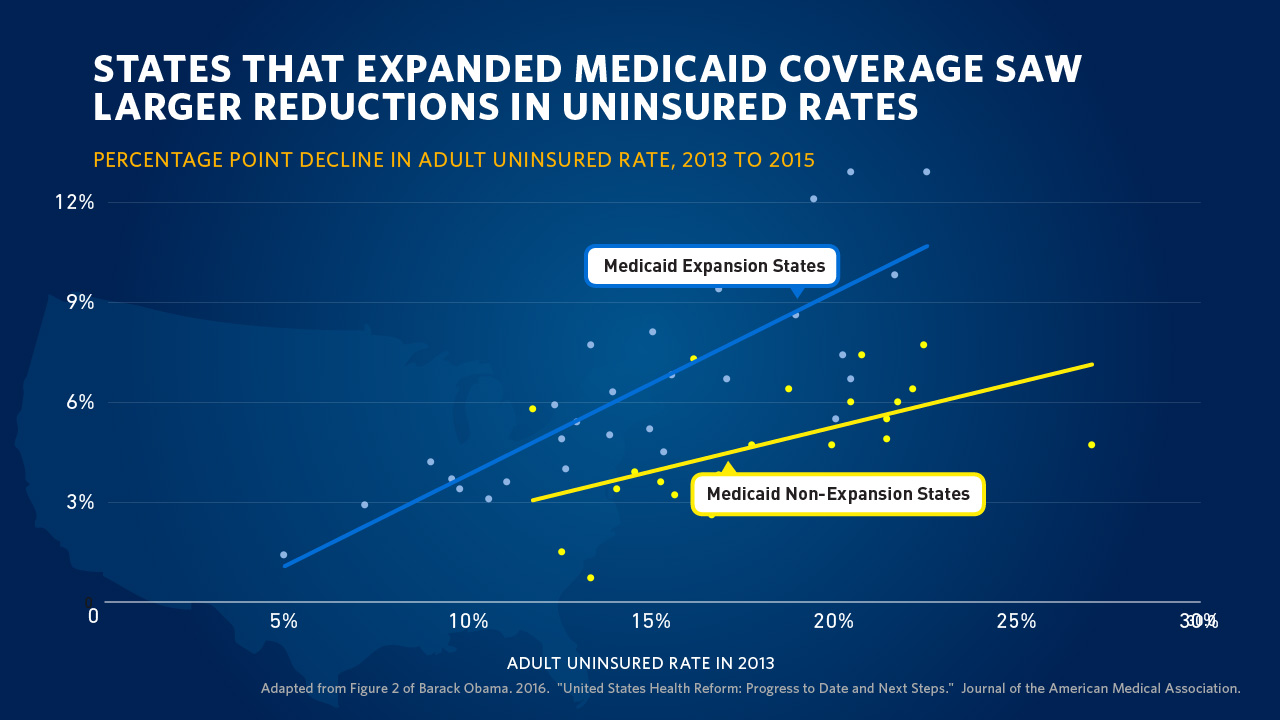 How the ACA has improved the quality of care:

"The rate at which Medicare patients are readmitted to the hospital within 30 days after discharge has also decreased sharply, from a mean of 19.1% during 2010 to a mean of 17.8% during 2015 (Figure 6; written communication; March 2016; Office of Enterprise Data and Analytics, Centers for Medicare & Medicaid Services). The Department of Health and Human Services has estimated that lower hospital readmission rates resulted in 565,000 fewer total readmissions from April 2010 through May 2015." 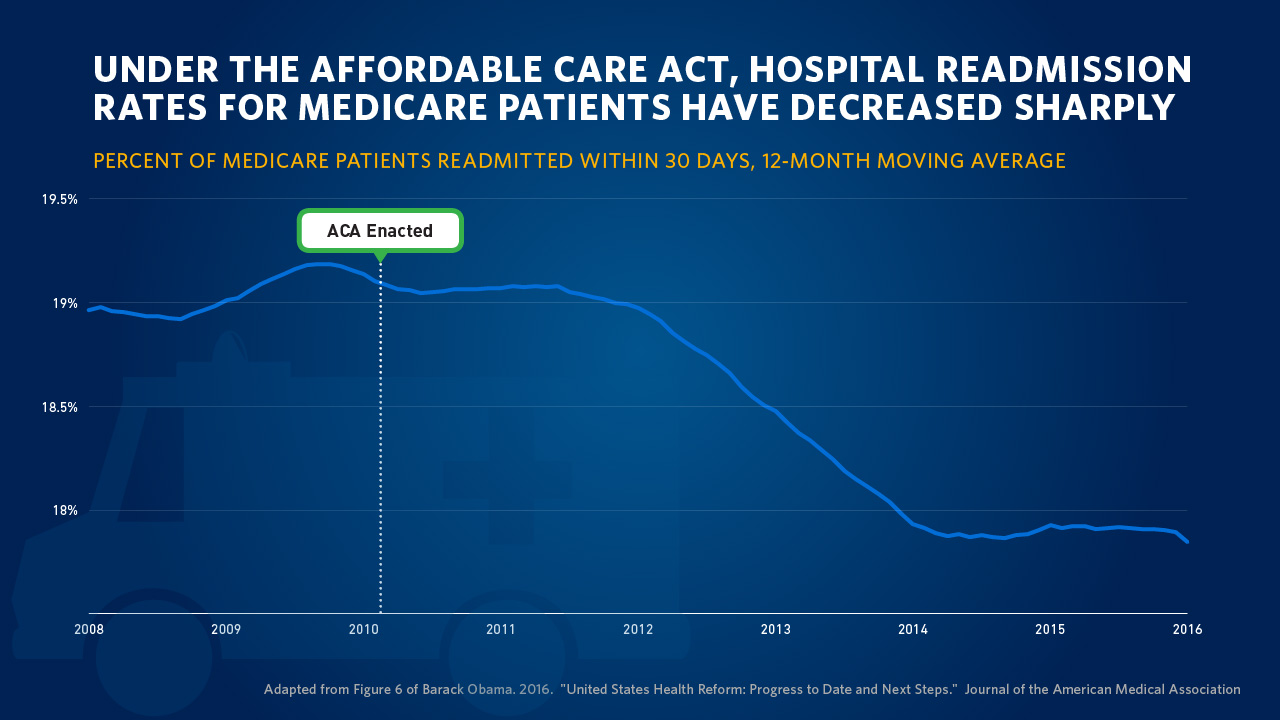 Despite this progress, President Obama said, too many Americans still face challenges securing affordable and quality health care. He laid out policy recommendations for ways to further improve our health care system, from enhancing competition in the Health Insurance Marketplace to addressing prescription drug costs.

The President closed by summarizing the broader lessons learned from passing and implementing the Affordable Care Act:

"While the lessons enumerated above may seem daunting, the ACA experience nevertheless makes me optimistic about this country’s capacity to make meaningful progress on even the biggest public policy challenges. Many moments serve as reminders that a broken status quo is not the nation’s destiny. I often think of a letter I received from Brent Brown of Wisconsin. He did not vote for me and he opposed “ObamaCare,” but Brent changed his mind when he became ill, needed care, and got it, thanks to the law.

"Or take Governor John Kasich’s explanation for expanding Medicaid: “For those that live in the shadows of life, those who are the least among us, I will not accept the fact that the most vulnerable in our state should be ignored. We can help them.” Or look at the actions of countless health care providers who have made our health system more coordinated, quality-oriented, and patient-centered.

"I will repeat what I said 4 years ago when the Supreme Court upheld the ACA: I am as confident as ever that looking back 20 years from now, the nation will be better off because of having the courage to pass this law and persevere. As this progress with health care reform in the United States demonstrates, faith in responsibility, belief in opportunity, and ability to unite around common values are what makes this nation great."