August 1, 2016 at 10:00 AM ET by Melanie Garunay
Twitter Facebook Email
Summary:
President Obama will talk about how we can expand opportunities for service members, veterans, and their families at the Disabled Veterans Convention in Atlanta, Georgia.

PRESIDENT OBAMA'S REMARKS | CARMEN'S STORY | OUR RECORD AND THE WORK AHEAD

Following the his remarks, the President penned a message to veterans on Task & Purpose: "Keeping Our Covenant With America’s Veterans":

Today at the 95th Disabled American Veterans National Convention, I gave my final major address as President to our nation’s veterans. As I reflect on these past seven and a half years, I want you to know I have had no greater honor than serving as your Commander-in-Chief.

In your heroism we see the enduring spirit of America. It’s through your sacrifices that this country we love remains free and strong. I believe that our nation has a sacred covenant with our veterans – that just as you served to protect us, we have a moral obligation to take care of you and your families when you come home. Working to uphold that covenant has been one of my most solemn responsibilities as president.

What service means to Carmen McGinnis, a former Marine

Carmen McGinnis, a former Marine who now helps other veterans as a staff member at DAV (Disabled American Veterans), sent the below message to the White House email list. Didn't get the email? Sign up for updates here.

I was inspired by my uncle, who was a door gunner in Vietnam for two tours. He never really talked about it, but I always knew how proud he was to be a Marine. People told me that I couldn't or wouldn’t join -- but that only made me more determined.

So, on the afternoon of the day after my 17th birthday, I enlisted in the Marine Corps. That day happened to be September 11, 2001.

I was deployed to southwest Afghanistan in 2004 and served as a radar repairman with ballistic missile defense. It was there, just outside of Kandahar, where I injured my back for the first time.

Then, I was accepted into the competitive Marine Security Guard School and served as a guard at American embassies across the world -- throughout that time, my back was injured again and again. I also acquired severe insomnia from shift work and survived a sexual assault that made me feel isolated.

These injuries left me in constant pain. Along with experiencing post-traumatic stress disorder, I endured some of the darkest times in my life.

But soon, I found an opportunity that gave me hope.

I took a position at DAV (Disabled American Veterans), an organization that empowers disabled veterans and their families to lead their lives with the full range of benefits available to them. Today, I serve as a National Service Officer, where I get to draw on my own experiences to help other disabled veterans with their recovery, through compassion and empathy.

In this work, I have seen firsthand how President Obama's efforts to serve veterans have made an impact. I appreciate his actions to ensure that the backlog of disability claims and appeals gets addressed. And I personally saw the number of mental health professionals increase in the Department of Veterans Affairs (VA). Addressing mental health for veterans still needs work, but it's better than it was.

That's why I'm proud to welcome President Obama at the Disabled Veterans Convention today in Atlanta, Georgia, where he'll speak about the progress we've made for veterans and the ways we can continue expanding opportunities for our service members, veterans, and their families. I hope you'll watch along with me at 1:35 pm Eastern.

I feel that I've survived what I've survived for a reason: to learn that my real strength comes from helping others. I absolutely love that I get to wake up every day and help change people's lives. Not many people can say that.

Our record on serving veterans and the work ahead

Over the past seven and a half years, the President has maintained a steadfast commitment to serve our nation’s veterans.

From delivering more health care than ever before, to providing veterans the benefits they have earned in a timely way, to expanding cutting edge research in areas like Post-Traumatic Stress (PTS) and Traumatic Brain Injury (TBI), to helping veterans get the education and jobs they need to succeed, the Administration has an indisputable record of support for our veterans.

Today, the President will announce two new milestones in this effort:

Moving forward, the President and the entire Administration will keep fighting in five core areas of service to our nation’s veterans. 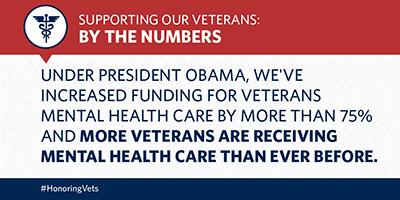 An essential part of this commitment is ensuring veterans receive the health care they need, when they need it. VA continues to make progress in this effort, increasing access to care and ensuring veterans are satisfied with their care.

But there's still more work to be done. Here are just a few ways the VA continues to execute on a number of strategies to increase access to care: 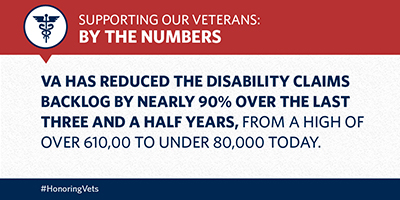 Three and a half years ago, nearly 610,000 veterans disability claims were stuck in a backlog waiting for longer than 125 days, and the VA did not have the capacity to keep up with an increasing number of claims. But by transforming internal processes and putting in place a new electronic system to move beyond the archaic paper-based system that was in place, VA has made extraordinary progress. Take a look:

The VA has taken what steps it can to improve the current claims appeals process, including introducing a new tool to improve internal processing. But what is needed is broad reform, and the problem is only going to get worse until Congress acts. That is why the President is reiterating his call for comprehensive legislative modernization of the appeals process. 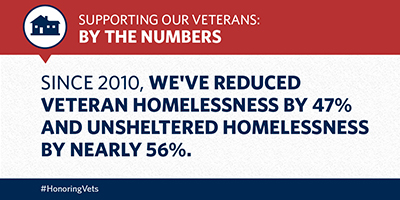 Ending veteran homelessness is a national imperative. And beginning in 2010 with the release of Opening Doors, the nation’s first-ever strategic plan to prevent and end homelessness, the Administration has dedicated itself to this goal. Here's the progress we've made:

The Administration is also announcing that, later this fall, the First Lady will be holding an event with local officials, non-profits, federal partners, private sector partners, advocates, and veterans to celebrate this extraordinary progress, announce additional milestones in the fight to end veteran homelessness, and underscore the federal, state and local partnerships that have been essential to our success, as a blueprint for this critical work to continue in coming years. 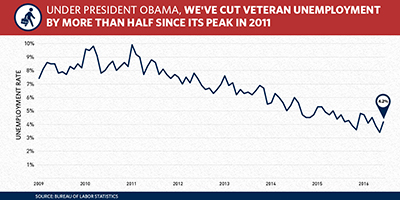 When veterans return home from their service to our country, we must ensure they have the opportunities and resources they need to succeed. The Administration continues to work to make sure veterans are provided opportunities to fulfill the American dream. Take a look:

•    The veteran unemployment rate has now dropped to 4.2%, compared to a high of 9.9% in January 2011.
•    The unemployment rate for Post-9/11 veterans is 4.4% today, down from a high of 15.2% in January 2011.
•    Since the launch of the Joining Forces initiative in 2011, more than 1.2 million veterans and military spouses have been trained or hired.
•    In May 2016, the First Lady announced a commitment of an additional 170,000 new hiring and training commitments from 50 companies in the telecommunications, aerospace, and tech sectors over the next five years.

The President has also made it a priority to ensure veterans and their families have access to the high-quality education they need to succeed. And that starts with the Post-9/11 GI Bill. Since its inception in 2009, the Post-9/11 GI Bill has provided $65.2 billion in education benefits to over 1.6 million individuals.