Retrospective Review, by the numbers

August 31, 2016 at 9:00 AM ET by Howard Shelanski
Twitter Facebook Email
Summary:
Over the past five years, we’ve been creating a cost-effective, 21st century regulatory system through retrospective review. Here’s a look at what we’ve accomplished:

In 2011 the President launched an unprecedented, government-wide review of existing regulations—known as retrospective review—as part of efforts to create a more cost-effective, evidence-based regulatory system for the 21st century. From maximizing savings and reducing burdens for State and local governments and industry, to eliminating tens of millions of hours of paperwork burdens for our nation’s citizens and businesses, to removing duplicative and burdensome regulatory provisions from the books altogether, this Administration has made more progress on retrospective review and achieved more cost savings than any prior Administration.

So, what specifically have we achieved in five years? Here’s a look at the power of retrospective review, by the numbers:

$37 billion. Since President Obama launched this government-wide review, agencies have achieved significant results by streamlining, revising, and eliminating many existing regulations. To date, the retrospective review initiative has achieved an estimated $37 billion in cost savings, reduced paperwork, and other benefits for Americans over five years. For example, the Department of Labor (DOL) harmonized its chemical hazards warning requirements with those of other nations in 2012. This provided a common and coherent approach to classifying chemicals and communicating hazard information on labels and safety data sheets, helping to reduce trade barriers and saving employers more than an estimated $3 billion over five years. Similarly, in 2011 the Environmental Protection Agency (EPA) eliminated part of a 40-year-old rule that required some dairy farmers to prove that they could contain a milk spill – because milk had been classified as an oil because it contains animal fat. By exempting milk and milk product containers from the Oil Spill Prevention, Control, and Countermeasure (SPCC) program, the EPA helped milk and dairy industries save an estimated $800 million over five years, which, in turn, can help reduce costs for consumers.

800. Today, agencies released the last set of biannual lookback reports for this Administration, indicating not only what they have accomplished since the last update, but also how they plan to continue to institutionalize this progress in the remaining months. These new initiatives join the growing list of more than 800 retrospective review initiatives the agencies have identified as complete. This includes a recent final rule from DOL, which brings old sex discrimination guidelines from the 1970’s to the modern era. By revising these outdated guidelines to reflect changes in current law and address the realities of today’s workplaces, the new rules bring greater clarity to the protections and equal opportunities available for millions of employees —both men and women—of federal contractors and subcontractors.

70. While a key aspect of retrospective review is to review and revise regulations to better adapt to a dynamic world of evolving technology and changing circumstances, the President has directed agencies to go beyond this and eliminate rules that are unnecessary. In fact, to date, agencies have removed more than 70 notable regulatory provisions from the books. For example, in 2012, the EPA eliminated the obligation on many states to require local gas stations in areas with moderate ozone pollution to install plastic sleeves over gas pump nozzles and other associated equipment, also known as an air pollution vapor recovery system. This measure was imposed in 1990, before vehicles were required to have built-in vapor recovery technologies.  Once the vehicle vapor recovery technology became widespread, EPA finalized a rule eliminating the longstanding requirement for this now redundant technology. The anticipated five-year savings from this reform are estimated at $270 million. 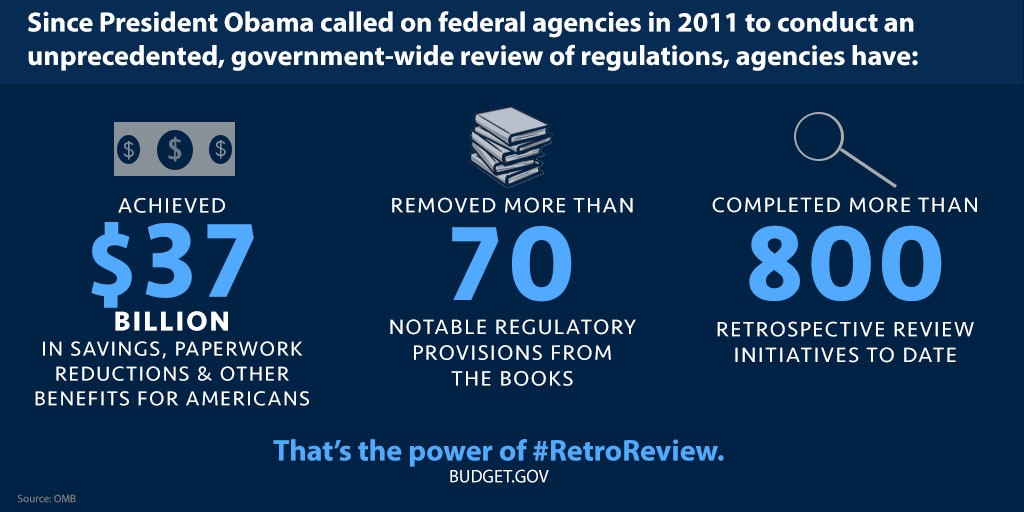 40 million. Surpassing all other examples in saving time for Americans through retrospective review, the Department of Transportation (DOT) issued a final rule in 2015 that is projected to save over 40 million hours in paperwork burden per year, for approximately $8.9 billion in savings over five years. The rule rescinds the requirement that commercial motor vehicle drivers operating in interstate commerce submit, and motor carriers retain, driver-vehicle inspection reports when the driver has neither found nor been made aware of any vehicle defects or deficiencies. And all combined, Federal agencies have eliminated tens of millions of hours of paperwork burdens for our nation’s citizens and businesses through their retrospective review efforts.

The progress to date makes a very strong case for the benefits of ongoing review of regulations already on the books. Each dollar saved, each paperwork burden hour reduced, and each retrospective review initiative conducted means bigger savings, greater efficiencies, and a more effective government for the American people.  We remain committed to institutionalizing this proven and effective practice so it continues to benefit Americans through the end of the Obama Administration and beyond.

Howard Shelanski is the Administrator of the Office of Information and Regulatory Affairs.