September 2, 2016 at 3:00 PM ET by Jason Furman, Jeffrey Zients
Twitter Facebook Email
Summary:
As the President embarks on the final G-20 meeting of his presidency, learn how our domestic and global economies have grown stronger over the past eight years.

In September 2008 during his presidential campaign and in the midst of the financial crisis, then-Senator Barack Obama identified the G-20 as a critical forum for economic policy cooperation and called on it to coordinate an international response to the crisis. In his words,

“[the American response] should be part of a globally coordinated effort with our partners in the G-20. This is a worldwide issue, and while the United States can and will lead in stabilizing the credit markets, we should ask other nations, who share in this crisis, to be part of the solution as well.”
Then-Senator Barack Obama, 2008

Within months of taking office, in April 2009, the President joined the second-ever summit meeting of the G-20 Leaders. Members committed to an aggressive policy response aimed at restoring growth and jobs, strengthening global financial oversight, and resisting protectionism. They mobilized trillions of dollars in fiscal stimulus and billions to the IMF and other Multilateral Development Banks. They created a Financial Stability Board and pledged to reshape national institutions, thereby supporting international authorities in their efforts to oversee domestic financial markets. They agreed to refrain from competitive devaluation of currencies and to take actions against tax havens. And now, as the President embarks for the final G-20 meeting of his presidency, both the U.S. and global economies are substantially stronger than they were almost 8 years ago—although more work remains to be done.

At the time of President Obama’s first G-20 Leaders’ Summit in April 2009, U.S. businesses were cutting hundreds of thousands of jobs a month, the U.S. economy had been in recession for over a year, and the unemployment rate had risen to 9 percent on its way to a peak of 10 percent. The global economy was shrinking for the first time in half a century as the world dealt with a financial crisis and its aftershocks. By some measures, the global economy was on a worse trajectory than was observed in 1929 at the outset of the Great Depression. Industrial production was contracting sharply, global trade slowing even faster than at the start of the Depression, and millions of workers were suddenly without jobs. 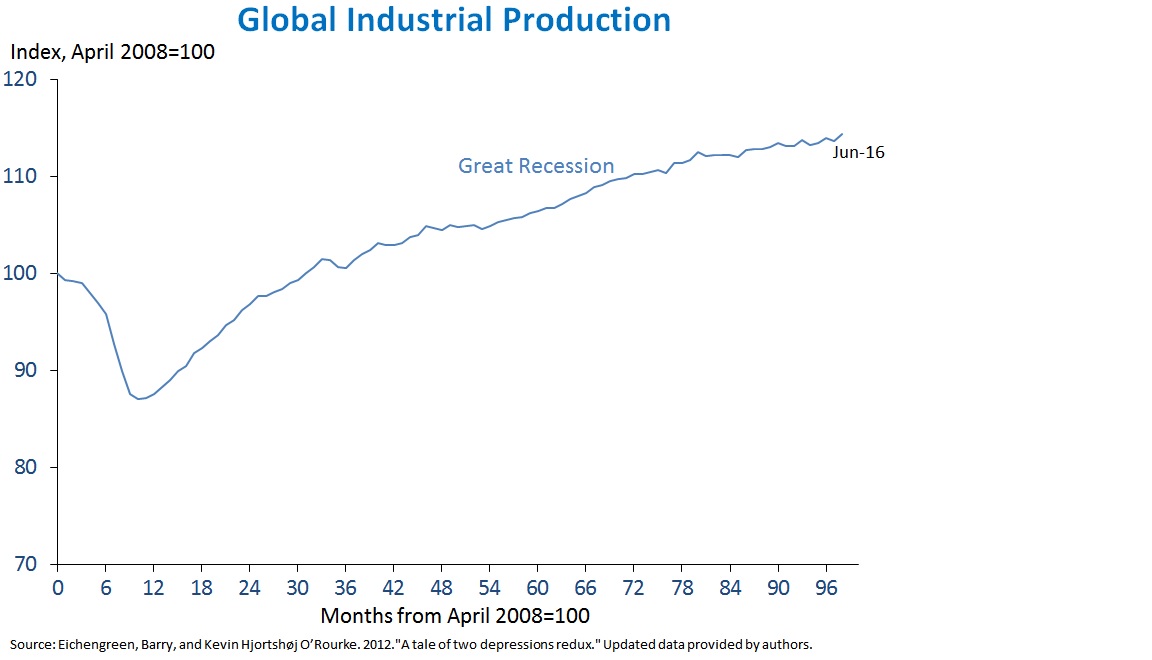 Today, U.S. output is more than 10 percent above its pre-crisis peak, and the global economy is in its seventh consecutive year of expansion. While the G-20 economies contracted during 2008, they are on more solid footing today and have grown during every four-quarter period since the third quarter of 2009, despite a range of unexpected challenges that arose over the intervening years. Since the crisis, the G-20 has confronted slowdowns in Emerging Markets, large up and then downswings in commodity markets, continued banking stress in many member nations, and financial crisis in parts of Europe. Still, despite these coming on the heels of the worst global economic shock in generations, economies around the world have returned to growth and have strengthened their foundations for long-term stability and prosperity. 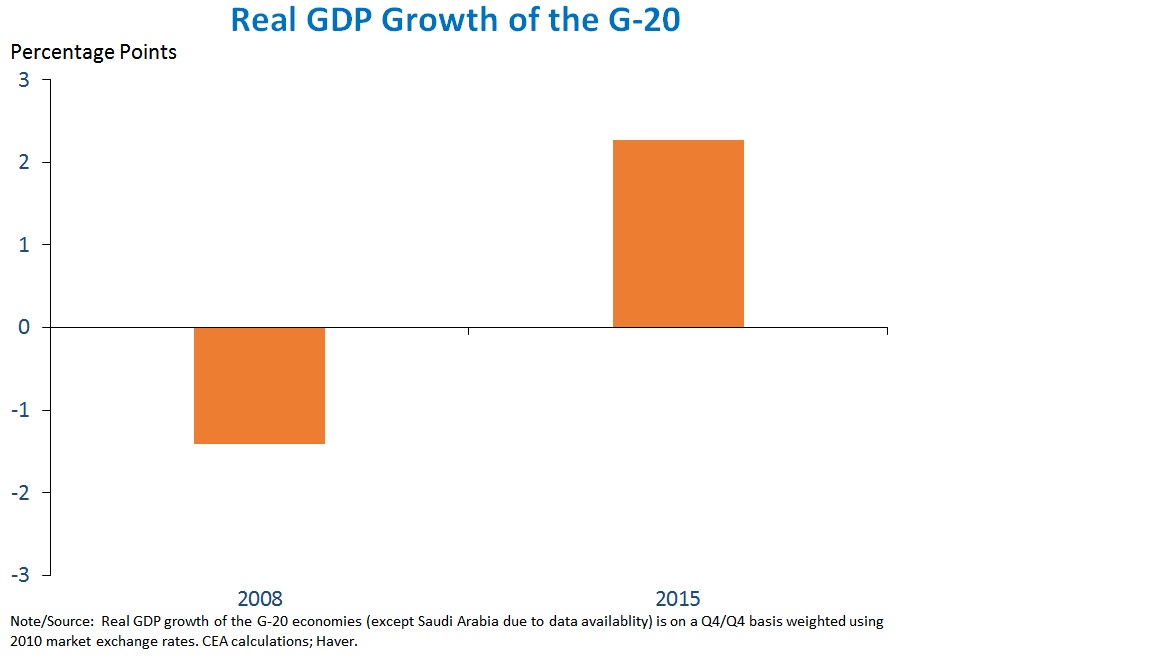 Since employment growth began in early 2010, U.S. businesses have added 15 million jobs, and the unemployment rate has fallen to half its peak and below its pre-crisis average. The unemployment rate repeatedly fell faster than independent economists expected, as the United States posted the longest streak of positive job growth in history. Unemployment in other countries has fallen meaningfully as well, though much more must still be done to strengthen labor markets in countries around the world.

At the upcoming G-20 Leaders’ Summit in Hangzhou, President Obama will emphasize the need to continue building on the progress made since 2009 in advancing strong, sustainable, balanced, and inclusive global economic growth.  While today there is no one-size-fits-all prescription for the G-20, it is clear that all countries must craft domestic policy approaches that follow through on the G-20 commitment to use all policy tools – including fiscal policy – to strengthen the global economic recovery.  For some members, there is considerable scope for greater investment in infrastructure, while many countries have opportunities to take steps to lift wages or support household incomes. The global economy is growing and, through hard work and resilience, has moved beyond the financial crisis, but greater ambitions of further strengthening growth and ensuring that its benefits are broadly shared are still needed.

Since 2009, the G-20 has also established itself as an invaluable forum, allowing leaders of the world’s major economies to work together to lift growth in mutually-supportive ways and reform the global financial system to help prevent future crises. Beyond the immediate economic crisis in the spring of 2009 and the recovery over the following years, the G-20 has taken steps to build a framework for strong, sustainable, balanced and inclusive growth in the long term. This has included policy coordination and consultation, as well as commitments to allow market determination of exchange rates, phase out fossil fuel subsidies, and implement strategies to create jobs and boost investment.  These efforts are strengthening the global economy today and will continue to do so in the future.

The G-20 has also played a crucial role in areas where international cooperation is the only way to make solid progress.  For example, the G-20 worked to strengthen the international financial regulatory system, including better coordination across countries. This major accomplishment has made the global economy better able to weather financial shocks and to prevent them from causing broader economic damage on Main Street and across borders. The G-20 has worked to combat the use of tax havens and profit shifting, which has required a joint effort across the major economies. The G-20 has also improved financial transparency and made significant progress to address corruption around the world.

Finally, the G-20 has advanced the goal of more representative and inclusive global economic governance.  At the Pittsburgh Summit in 2009, President Obama and his counterparts made the decision to elevate the G-20 as the premier forum for international economic cooperation, ensuring that major emerging economies would have a seat at the table for the world’s key economic policy decisions. The G-20 has in turn worked to modernize and strengthen the international financial architecture, including a historic recapitalization and reform across multilateral development banks, reforming the quota and governance system of the IMF, and ensuring that the heads of international financial institutions will be appointed through open, merit-based processes.  Taken together, these steps reinforce U.S. leadership in the rules-based global economic system that has prevailed since the end of World War II.

In 2009, the global economy faced a historic crisis and a turning point. The decisions of economic policymakers during this time would reverberate for years, and the course they charted had to navigate many pitfalls. Confronted with a once-in-a-generation challenge, the G-20 provided a forum for productive and open dialogue, enabling important progress on growth and issues of global economic governance that have left the world economy in a fundamentally better place than leaders found it when they surveyed the globe in April 2009. We still face many challenges to provide the sustainable, inclusive growth that our citizens depend on, but the G-20 puts us in a better position to meet those challenges together.