On this Labor Day weekend, President Obama penned a letter to America's hardworking men and women on how raising your voice can help ensure that middle-class Americans are sharing in the benefits of the broad-based economic growth that they are helping to create. History has shown that working families can get a fair shot in this country – but only if we are willing to organize and fight for it.

The President’s letter was shared through unions and labor, civil rights, and community organizations across the country. 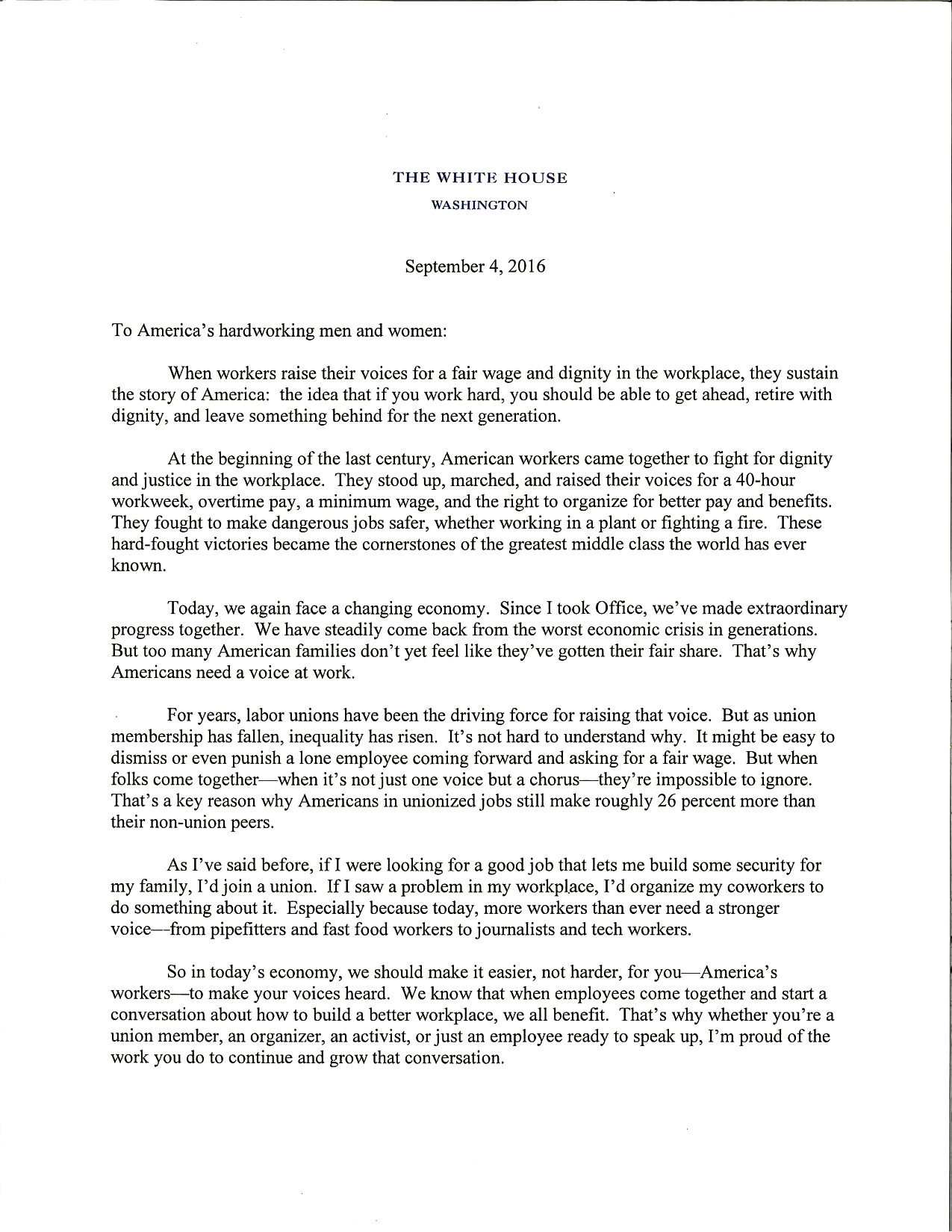 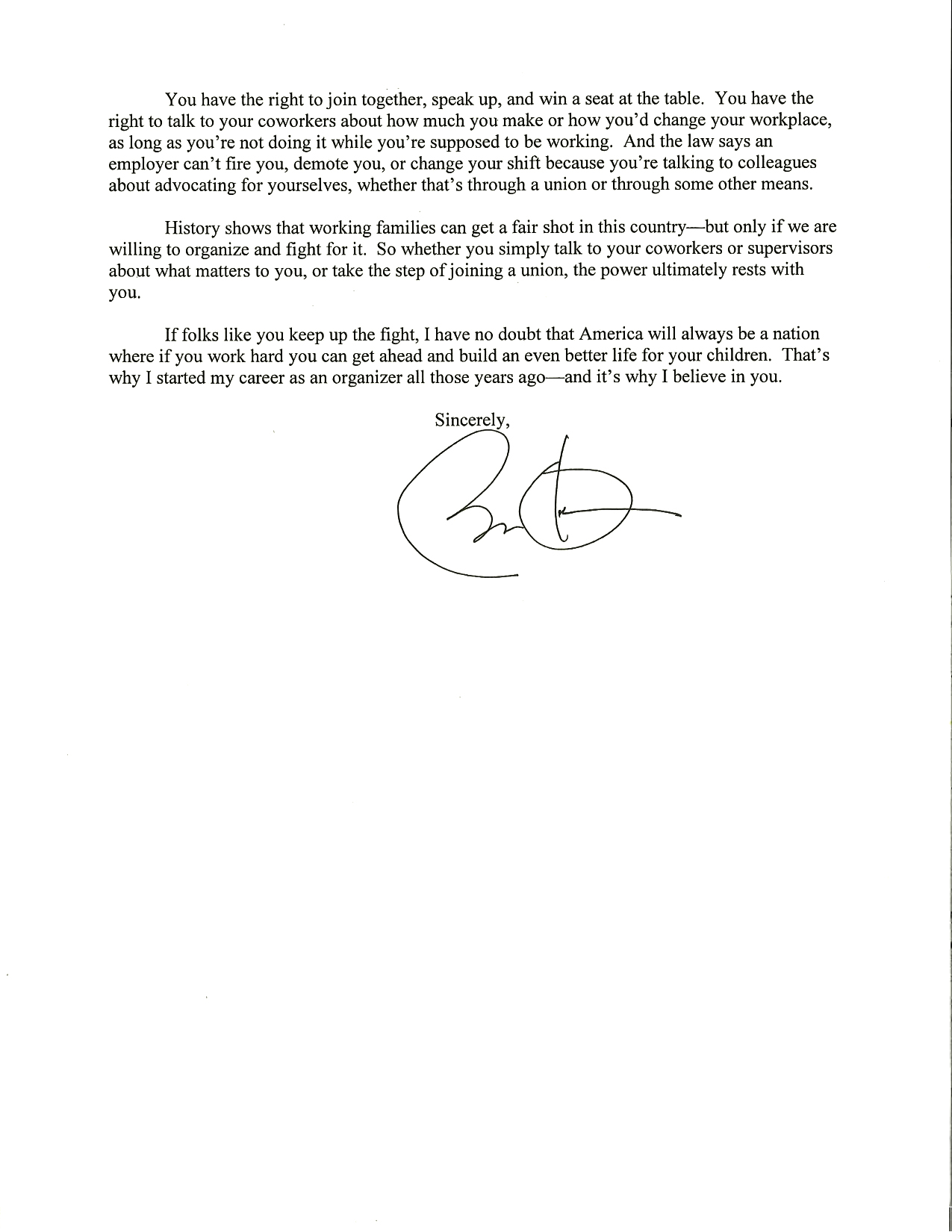 Here is a transcript of the President's letter:

To America’s hardworking men and women:

When workers raise their voices for a fair wage and dignity in the workplace, they sustain the story of America:  the idea that if you work hard, you should be able to get ahead, retire with dignity, and leave something behind for the next generation.

At the beginning of the last century, American workers came together to fight for dignity and justice in the workplace.  They stood up, marched, and raised their voices for a 40-hour workweek, overtime pay, a minimum wage, and the right to organize for better pay and benefits.  They fought to make dangerous jobs safer, whether working in a plant or fighting a fire.  These hard-fought victories became the cornerstones of the greatest middle class the world has ever known.

Today, we again face a changing economy.  Since I took Office, we’ve made extraordinary progress together.  We have steadily come back from the worst economic crisis in generations.  But too many American families don’t yet feel like they’ve gotten their fair share.  That’s why Americans need a voice at work.

For years, labor unions have been the driving force for raising that voice.  But as union membership has fallen, inequality has risen.  It’s not hard to understand why.  It might be easy to dismiss or even punish a lone employee coming forward and asking for a fair wage. But when folks come together—when it’s not just one voice but a chorus—they’re impossible to ignore.  That’s a key reason why Americans in unionized jobs still make roughly 26 percent more than their non-union peers.

As I've said before, if I were looking for a good job that lets me build some security for my family, I’d join a union.  If I saw a problem in my workplace, I’d organize my coworkers to do something about it.  Especially because today, more workers than ever need a stronger voice—from pipefitters and fast food workers to journalists and tech workers.

So in today’s economy, we should make it easier, not harder, for you—America’s workers—to make your voices heard.  We know that when employees come together and start a conversation about how to build a better workplace, we all benefit.  That’s why whether you’re a union member, an organizer, an activist, or just an employee ready to speak up, I’m proud of the work you do to continue and grow that conversation.

You have the right to join together, speak up, and win a seat at the table.  You have the right to talk to your coworkers about how much you make or how you’d change your workplace, as long as you’re not doing it while you’re supposed to be working.  And the law says an employer can’t fire you, demote you, or change your shift because you’re talking to colleagues about advocating for yourselves, whether that’s through a union or through some other means.

History shows that working families can get a fair shot in this country—but only if we are willing to organize and fight for it.  So whether you simply talk to your coworkers or supervisors about what matters to you, or take the step of joining a union, the power ultimately rests with you.

If folks like you keep up the fight, I have no doubt that America will always be a nation where if you work hard you can get ahead and build an even better life for your children.  That’s why I started my career as an organizer all those years ago—and it’s why I believe in you.

Ahead of Labor Day weekend, President Obama highlighted the economic progress we’ve made over the course of his administration and how the labor movement has been and continues to be a critical part in buidling on our progress. Watch his weekly address here.