Income, Poverty, and Health Insurance in the United States in 2015

September 13, 2016 at 11:00 AM ET by Jason Furman, Sandra Black, and Matt Fiedler
Twitter Facebook Email
Summary:
In 2015, household income grew at the fastest rate on record, the poverty rate fell faster than at any point since 1968, and the uninsured rate continued to fall.

Watch as President Obama discusses the remarkable progress today's Census report laid out with the Chairman of his Council of Economic Advisers, Jason Furman. 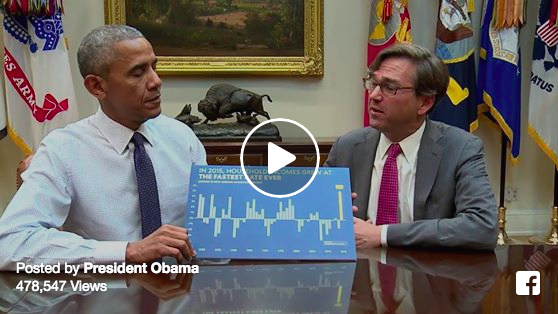 Today’s report from the Census Bureau shows the remarkable progress that American families have made as the recovery continues to strengthen. Real median household income grew 5.2 percent from 2014 to 2015, the fastest annual growth on record. Income grew for households across the income distribution, with the fastest growth among lower- and middle-income households. The number of people in poverty fell by 3.5 million, leading the poverty rate to fall from 14.8 percent to 13.5 percent, the largest one-year drop since 1968, with even larger improvements for African Americans, Hispanic Americans, and children. Meanwhile, the ratio of earnings for women working full-time, full-year to earnings for men working full-time, full-year increased to 80 percent in 2015, the highest on record. Every State has seen declines in its uninsured rate since 2013 as the major coverage provisions of the Affordable Care Act have taken effect. Solid employment growth and robust real wage growth so far this year suggest that incomes are continuing to rise in 2016, and, building on the progress shown in today’s Census report, the President will continue to call on Congress to take steps to invest in job creation, wage growth, and equal pay for equal work.

SIX KEY POINTS IN TODAY’S REPORT FROM THE CENSUS BUREAU

1. Real median household income rose by 5.2 percent in 2015, the fastest growth on record. Median household income grew $2,798 to $56,516 in 2015, the first time that annual real income growth exceeded 5 percent since the Census Bureau began reporting data on household income in 1967. Data from 2016 so far point to further strong gains in real household incomes, which depend on employment, nominal wages, and inflation. As of August, total nonfarm job growth has averaged a solid 182,000 jobs a month so far in 2016, and hourly earnings for private-sector workers have increased at an annual rate of 2.8 percent, much faster than the pace of inflation (1.3 percent as of July, the latest data available). 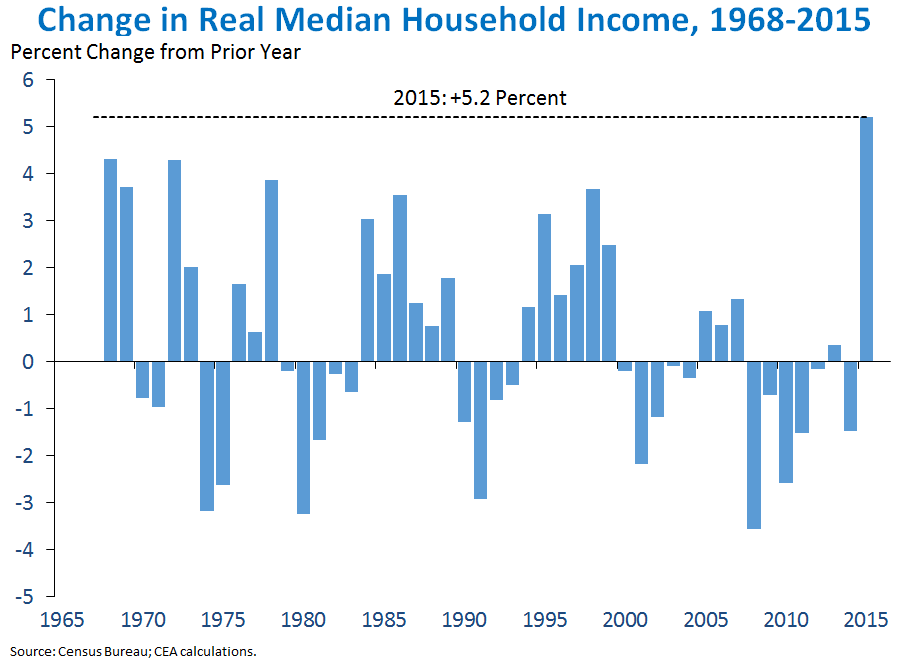 2. The total number of Americans below the poverty line fell by 3.5 million from 2014 to 2015, and the official poverty rate fell to 13.5 percent due to the largest one-year drop since 1968. The poverty rate for children under age 18 fell by 1.4 percentage point (p.p.) from 2014 to 2015, equivalent to more than 1 million children lifted out of poverty. Meanwhile, the poverty rate for those ages 18 to 64 saw its largest one-year decline on record (-1.1 p.p.), and poverty fell 1.1 p.p. for those ages 65 and older. As noted below (see point 5), the official poverty rate does not reflect the full effect of antipoverty policies because it includes only pre-tax income and excludes the direct effect of key policies like the Supplemental Nutrition Assistance Program (SNAP) and the Earned Income Tax Credit (EITC). The Supplemental Poverty Measure, which is designed to include the effects of these programs but also takes into the cost of basic needs when setting the poverty threshold, decreased 1.0 percentage point in 2015, from 15.3 percent to 14.3 percent. 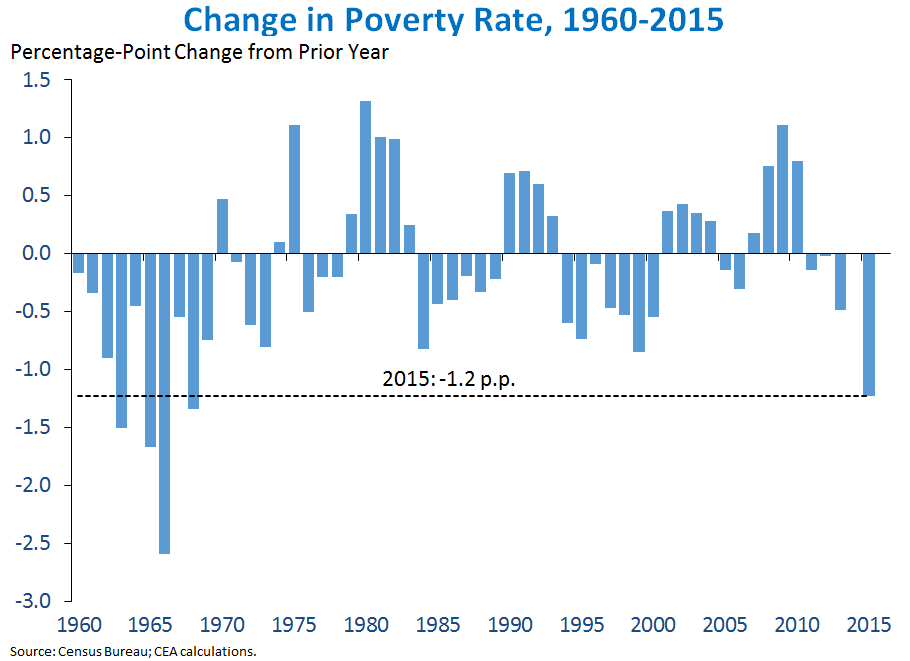 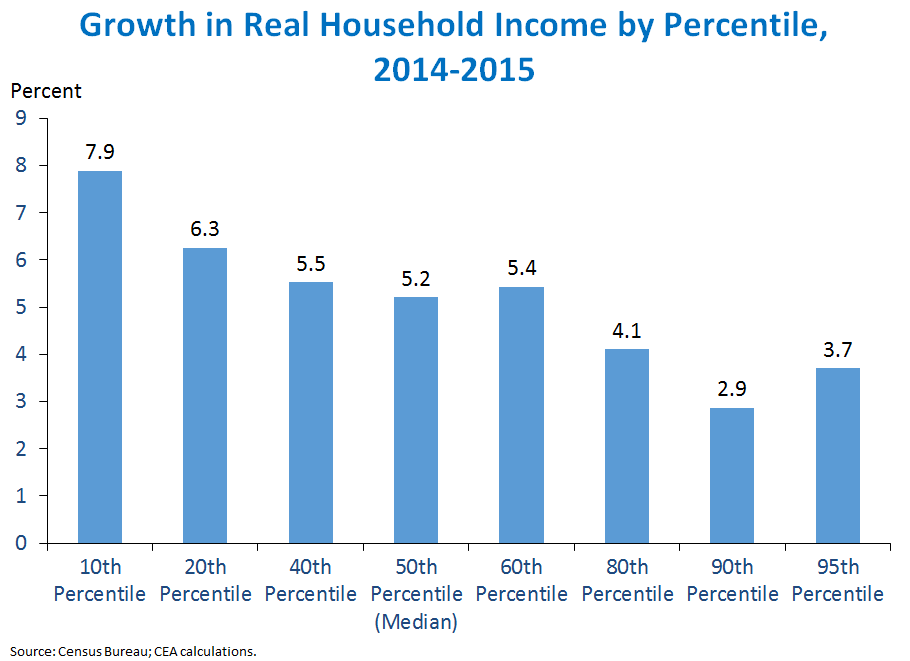 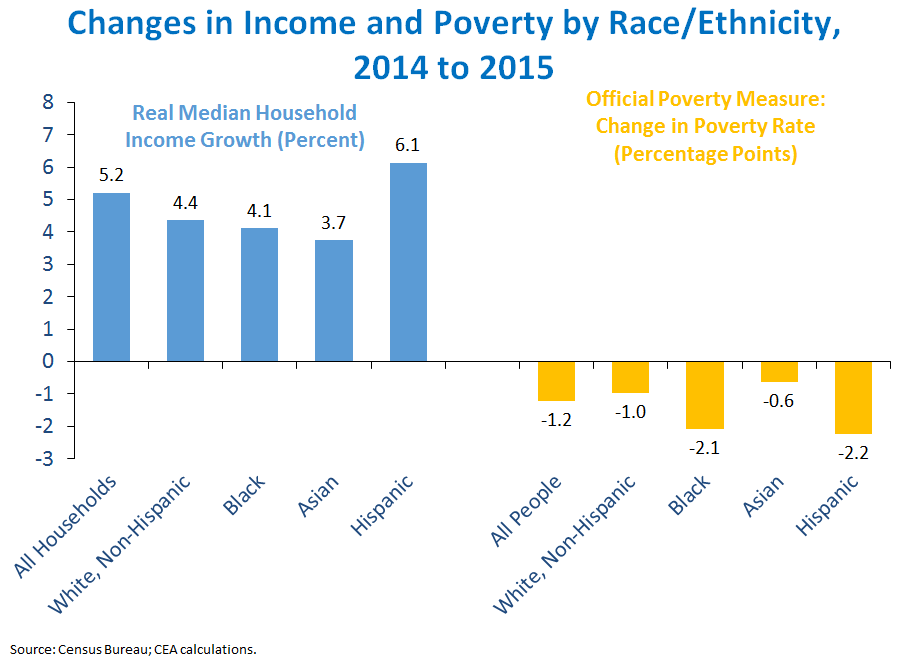 5. In 2015, refundable tax credits like the Earned Income Tax Credit (EITC) and the Child Tax Credit (CTC) lifted 4.8 million children out of poverty. The Supplemental Poverty Measure (SPM), which includes the effects of a large number of antipoverty programs, is widely acknowledged to measure poverty more accurately than the official measure. Unlike the official poverty measure, the SPM measures post-tax and post-transfer resources, combining earnings with assistance from government programs—including in-kind transfers like food assistance—minus net tax liabilities and necessary expenditures on work, child care, and health care. The measure also bases the poverty line on the cost of meeting basic expenses. Together, in 2015, 9.2 million Americans, including 4.8 million children, were lifted above the poverty line by refundable tax credits, including the EITC and the CTC, illustrating their critical importance to the social safety net. Additionally, research has shown that helping low-income working families through the EITC and CTC not only reduces poverty, but also has positive longer-term effects on children, including improved health, educational outcomes, and labor force participation and earnings in adulthood. Expansions to the EITC and CTC signed into law by President Obama as part of the American Recovery and Reinvestment Act of 2009 lifted 1.0 million children out of poverty in 2013 according to the Center on Budget and Policy Priorities; these provisions were made permanent under the bipartisan agreement at the end of 2015. The President’s Fiscal Year 2017 Budget includes a number of provisions to further strengthen tax credits for working families, including an expansion of the EITC to workers without qualifying children. (Note that some of these estimates rely on survey data, which research has shown tend to underreport household use of certain programs like the Supplemental Nutrition Assistance Program, leading to underestimates of the poverty-reducing effects of these programs.) 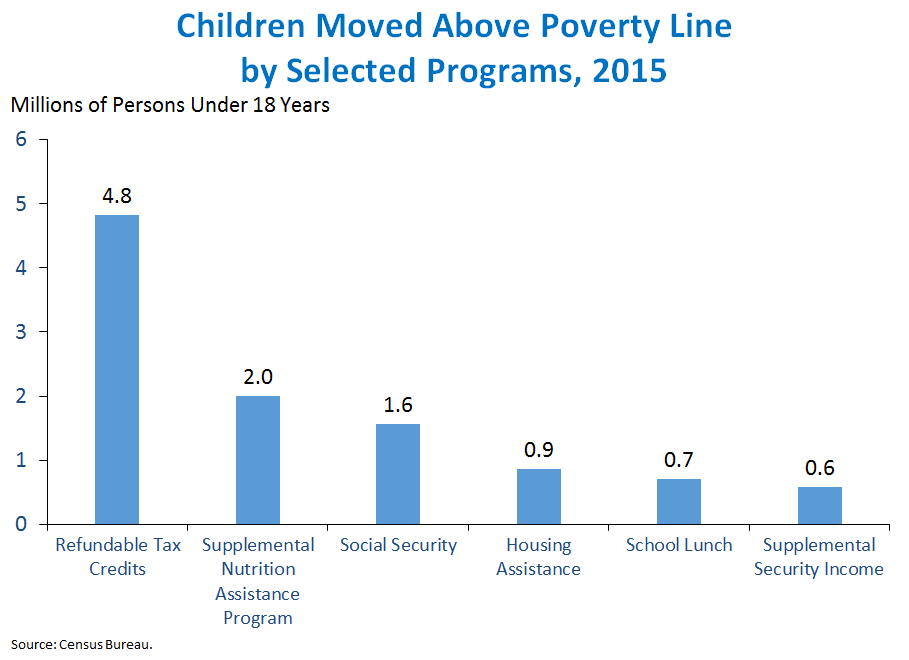 6. In 2015, the share of people without health insurance declined in almost every State, and all States have seen gains since 2013, reflecting continued progress under the Affordable Care Act (ACA). Today’s new data from the American Community Survey (ACS) show that 49 States and the District of Columbia saw their uninsured rates decline in 2015. The uninsured rate has fallen in every State (as well as in the District of Columbia) since 2013. While the ACS is not the first survey to report estimates of State-level insurance coverage in 2015, the survey’s extremely large sample size allows it to provide particularly reliable estimates.

While all States have seen increases in insurance coverage since the ACA’s major coverage provisions took effect in the beginning of 2014, the extent of those gains have varied widely by State. Notably, States that have expanded Medicaid under the ACA have seen larger coverage gains on average, particularly if they started with a larger uninsured population. If Medicaid non-expansion States had seen coverage gains comparable to those seen by Medicaid expansion states with similar uninsured rates, the uninsured rate in these states would have been nearly 3 percentage points lower in 2015, increasing the magnitude of these states’ coverage gains since 2013 by almost two-thirds.

Today’s Census release also included an estimate of the national change in the uninsured rate based on the Current Population Survey (CPS). According to the CPS, the national uninsured rate dropped by 1.3 percentage points from 10.4 percent in 2014 to 9.1 percent in 2015, bringing the cumulative gain since 2013 to 4.3 percentage points. The new data from the CPS are broadly consistent with evidence from other Federal and private surveys showing that coverage gains continued during 2015; those surveys show that gains have continued into early 2016. The cumulative coverage gains since 2013 have put the uninsured rate at its lowest level ever. 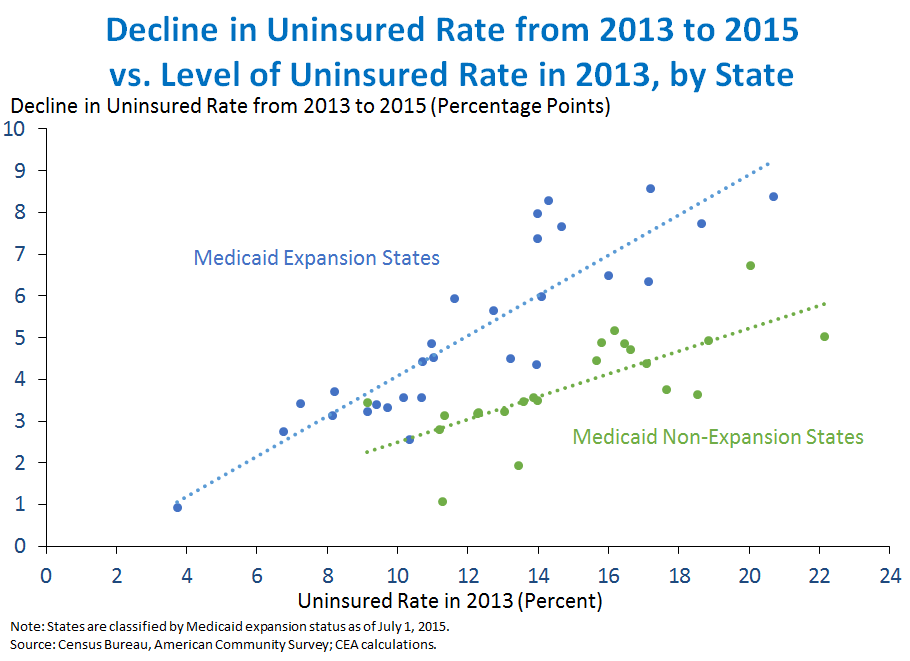