Refugees Welcome: Celebrating the Communities That Shape and Strengthen America

This week, the White House is celebrating National Welcoming Week -- a way to bring people together to honor the contributions of immigrants and refugees and to highlight efforts across the country to building stronger, more welcoming communities.

To kick it off, we're hosting a roundtable discussion with Chief of Staff Denis McDonough, Director of the Domestic Policy Council Cecilia Muñoz, and former Secretary of State Madeleine Albright.

You can join in right here, or share your thoughts on social media using the hashtags #RefugeesWelcome and #WelcomingWeek.

In a message to the White House email list, Cecilia Muñoz laid out how President Obama has continued to build on our country's rich tradition of welcoming refugees across the globe:

"President Obama believes that we are stronger as a nation when we welcome immigrants and refugees into our communities and harness their skills. This year, we are proud to announce that we have met our goal of welcoming 10,000 Syrian refugees a month ahead of schedule, and we are well on our way to welcoming 85,000 refugees to our shores in 2016. And in 2017, we will seek to resettle 110,000 refugees, increasing the number of people we receive by almost 60 percent over a two-year period."

Throughout the week, we'll be highlighting the voices of refugees and immigrants to honor their courage and resilience and celebrate their contributions to our nation.

Gunnery Sergeant Emir Hadzic is one of those voices. Emir fled the persecution and hostility of his home country, Bosnia and Herzegovina, to become the first Bosnian-American to serve in the U.S. Marine Corps. In a letter to the President, he wrote about how his decision to serve came from wanting to give back to the "goodhearted American people" who welcomed and his family and helping them start a new life.

"The chief factor for me was a feeling of an obligation to repay a debt, as I felt indebted to the American people who welcomed my family and my people to the United States. Goodhearted American people helped us start a new life here free home persecution and hostility. I believe that we have become those Americans too. As the first Bosnian-American in the U.S. Marine Corps, I had the role of a pathfinder was well a good cultural ambassador. I believe that I succeeded."

Check out Emir's full letter below, and stay tuned for more stories throughout the week. 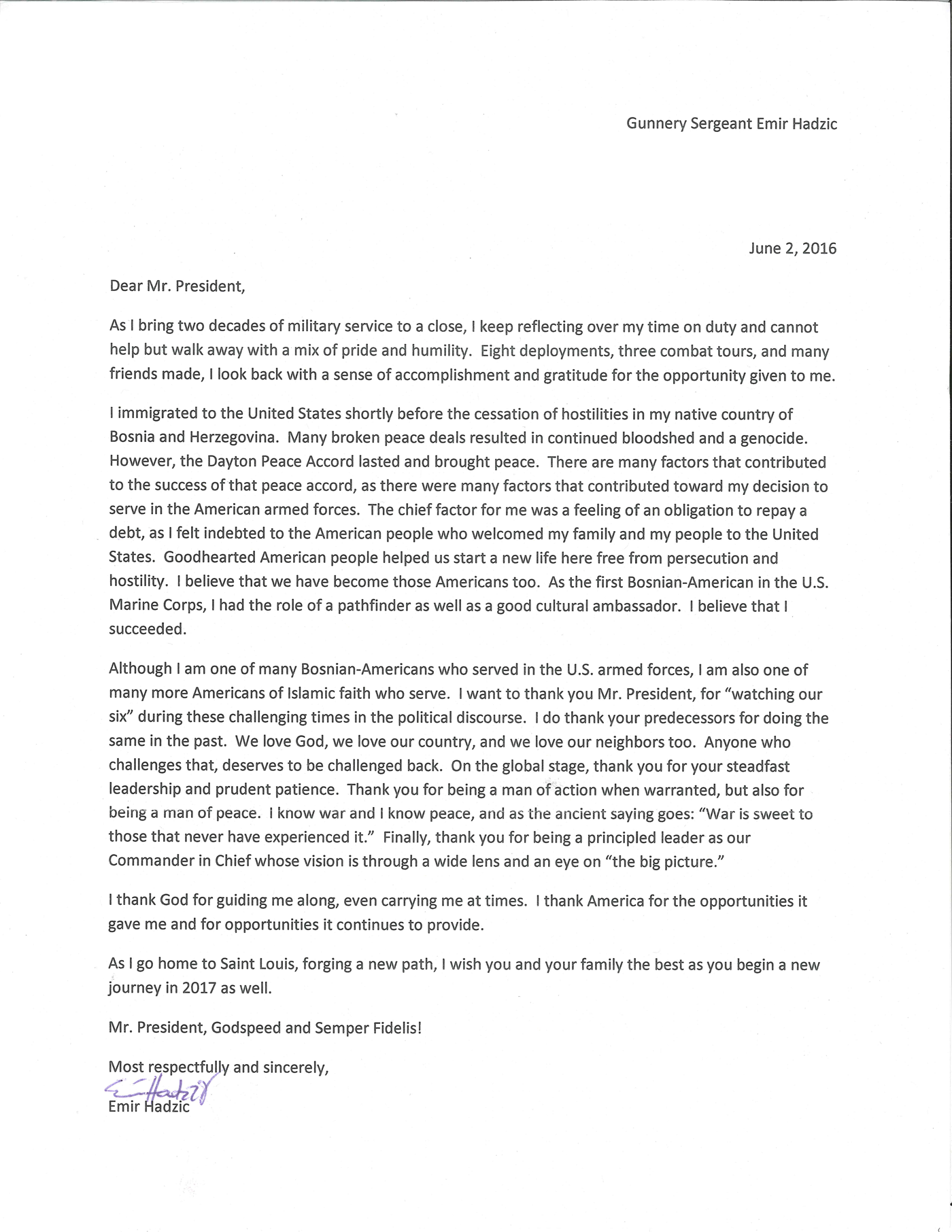 As I bring two decades of military service to a close, I keep reflecting over my time on duty and cannot help but walk away with a mix of pride and humility. Eight deployments, three combat tours, and many friends made, I look back with a sense of accomplishment and gratitude for the opportunity given to me.

I immigrated to the United States shortly before the cessation of hostilities in my native country of Bosnia and Herzegovina. Many broken peace deals resulted in continued bloodshed and a genocide. However, the Dayton Peace Accord lasted and brought peace. There are many factors that contributed to the success of that peace accord, as there were many factors that contributed toward my decision to serve in the American armed forces. The chief factor for me was a feeling of an obligation to repay a debt, as I felt indebted to the American people who welcomed my family and my people to the United States. Goodhearted American people helped us start a new life here free home persecution and hostility. I believe that we have become those Americans too. As the first Bosnian-American in the U.S. Marine Corps, I had the role of a pathfinder was well a good cultural ambassador. I believe that I succeeded.

Although I am one of many Bosnian-Americans who served in the U.S. armed forces, I am also one of many more Americans of Islamic faith who serve. I want to thank you Mr. President, for “watching our six” during these challenging times in the political discourse. I do thank your predecessors for doing the same in the past. We love God, we love our country, and we love our neighbors too. Anyone who challenges that, deserves to be challenged back. On the global stage, thank you for your steadfast leadership and prudent patience. Thank you for being a man of action when warranted, but also for being a man of peace. I know war and I know peace, and as the ancient saying goes: “War is sweet to those that never have experienced it.” Finally, thank you for being a principled leader as our Commander in Chief whose vision is through a wide lens and an eye on “the big picture.”

As I go home to Saint Louis, forging a new path, I wish you and your family the best as you being a new journey in 2017 as well.

Most respectfully and sincerely,