Economic Recovery in the Spotlight: Fresno

October 6, 2016 at 11:30 AM ET by Shannon Buckingham
Twitter Facebook Email
Summary:
OMB Director Shaun Donovan traveled to Fresno, CA, to highlight the economic progress made and the challenges that remain. Here are a few highlights from his visit:

Fresno’s turnaround reminds us that when we fall on hard times, we come together to solve problems and overcome challenges. This principle has helped sustain our nation through the depths of the Great Recession, and it’s with this principle that we’ll continue to build a stronger economy for Fresno and for the nation as a whole.
OMB Director Shaun Donovan and Fresno Mayor Ashley Swearengin

In recent decades, Fresno has been known for chronic, long-term economic challenges that were exacerbated by the Great Recession. But thanks to the grit and determination of the people of Fresno, and partnerships with and support from the Obama Administration, the city’s unemployment rate has been cut nearly in half.  Real average weekly earnings in the private sector have risen by 17 percent since 2007. Home prices have risen by more than 21 percent since 2010. And, chronic homelessness has dropped by 50 percent.  More work remains, but Fresno’s partnership with the Obama Administration, in particular through the Strong Cities, Strong Communities initiative, has been pivotal in helping Fresno and charting a new future for the city.

Check out these highlights from the Director’s visit: 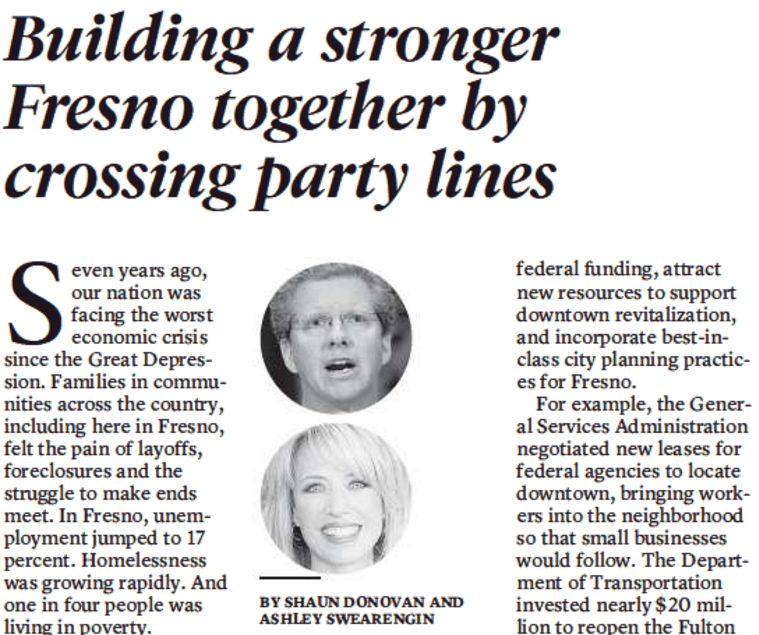 2. Experience a tour of Fulton Corridor, the central hub of the city’s revitalization efforts.

Fresno's Mariposa Plaza. On its way to becoming an arts & culture center with support from $150k NEA grant. pic.twitter.com/IcQVCLBBAf

The remarkable economic transformation over the last eight years can be found not just in Fresno, but across the nation. Our businesses have created more than 15 million new jobs since early 2010. Twenty million more people now have the security of health coverage thanks to the Affordable Care Act. And recent data from the Census Bureau shows real median household incomes saw the fastest annual growth on record. Income grew for households across the income distribution, with the fastest growth among lower- and middle-income households. The number of people in poverty fell by 3.5 million, the largest one-year drop since 1966. Meanwhile, the ratio of earnings for a typical woman working full-time, full-year to earnings for a typical man working full-time, full-year increased to 80 percent in 2015, the highest on record.

By almost every economic measure, we are better off than we were when President Obama took office. While we have more work to do, it’s important to reflect on this progress and build on it to overcome the challenges that remain.

Shannon Buckingham is the Associate Director for Communications and Strategic Planning at the White House Office of Management and Budget.