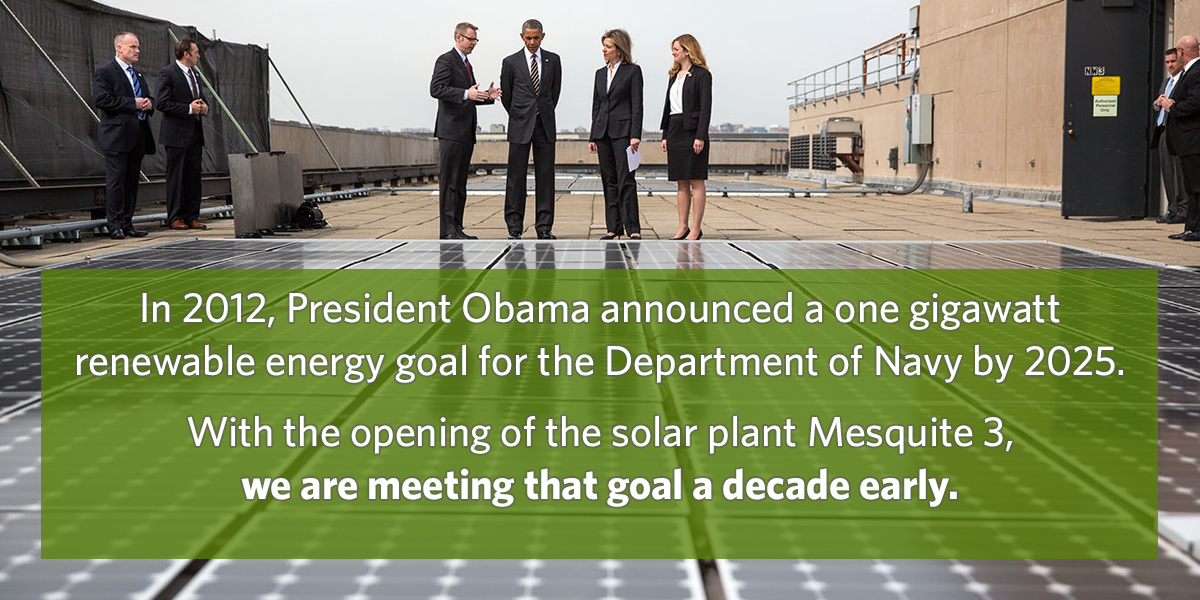 Addressing climate change remains a top priority for President Obama. The Administration is committed to take action on climate change by continuing to promote the transition to clean energy sources and create good paying jobs. As the President made clear in his Climate Action Plan, he firmly believes that the federal government should lead by example in improving energy efficiency and cutting harmful carbon pollution. Today the Administration is celebrating the achievement of one federal leadership goal, and setting a new one.

In 2012, President Obama announced the Department of Defense's (DoD) commitment to deploy three gigawatts on Army, Navy, and Air Force installations by 2025 – enough to power 750,000 homes. Today, in Arlington, Arizona, the Department of Navy, Department of Energy, Sempra Energy, and the White House Office of Federal Sustainability are participating in a ribbon cutting ceremony to announce the operationalization of 210 megawatts of solar power at the Mesquite III facility, the federal government's largest investment in clean energy in history.

Mesquite III will supply 14 Navy and Marine Corps installations in California with clean energy, providing one-third of their electricity needs for 25 years at a cost savings of more than $90 million.

In addition to announcing a major milestone towards the DoD renewable energy goal, today the Obama Administration is launching another ambitious target – a new goal for civilian agencies to procure and facilitate development of 1 gigawatt of new renewable electricity by 2021. This goal promotes installation of renewable energy on federal land, the development of new solar through power purchase agreements, and procurement of bundled green energy to power federal facilities. Additionally, this target will also incentivize projects on federal land where the government is not the sole user, such as enhanced use leases and facilitation of private development.

This goal builds on last year’s goal that 30 percent of electricity used by the federal government will come from renewable sources by 2025, and solar will play a large part. Since 2010, federal agencies have increased use of solar five-fold, with solar now accounting for 19 percent of renewable electricity use and 180 megawatts of onsite power.

Federal leadership in deploying renewable energy has contributed to significant progress in deploying solar. When President Obama took office, there wasn’t a single utility-scale photovoltaic (PV) solar plant in America larger than 20 megawatts. But beginning in 2009, the Department of Energy’s Loan Programs Office stepped in to provide more than $4.6 billion in loan guarantees to support construction of the first five utility-scale PV solar facilities in the U.S. larger than 100 MW. Mesquite I was one of those projects. 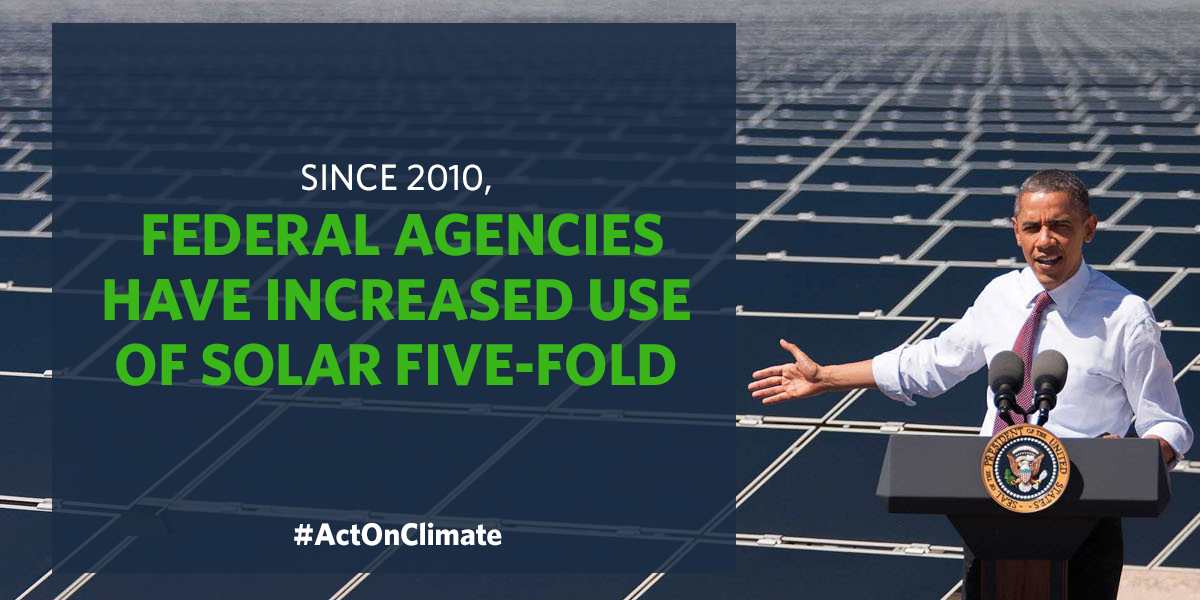 Since those first five solar plants were financed, dozens of utility-scale PV projects have been financed without DOE loan guarantees and are either under construction or already producing clean energy. The dedication of Mesquite III takes the success of these projects even further by demonstrating how government can work together across agencies and with the private sector.

From solar to wind, renewables across the board have seen costs drop and deployment increase. Last year, the United States brought online as much solar energy every three weeks as it did in all of 2008, and the solar industry added jobs 10 times faster than the rest of the economy. And since the beginning of 2010, the average cost of a solar electric system has dropped by 50 percent. By leading at the federal level, agencies, both military and civilian are not only reaping the benefits of transitioning to renewable power, but also leading by example.