October 19, 2016 at 10:02 AM ET by Cassandra Marketos
Twitter Facebook Email
Summary:
Here's how we're helping to make flying easier and simpler for millions of Americans. 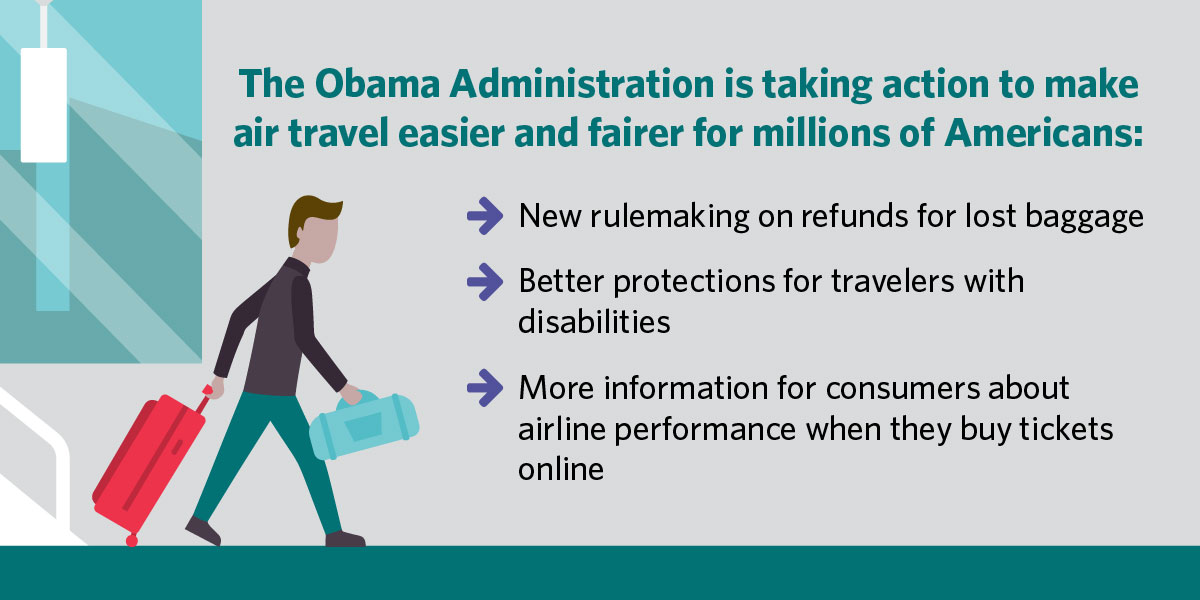 This year, more than 700 million passengers are expected to board 9 million domestic airline flights in America. The sheer volume of people, flights, and miles underscores how fundamental air travel is -- not just to the American economy, but to the lives of so many people across the country. That's why, when American families and workers travel, they deserve to know exactly what they're buying.

Today, the Department of Transportation is announcing a series of new executive actions to spur competition in the airline industry -- and improve air travel for millions of American consumers. These actions will help consumers know how airlines are performing, make sure consumers don’t have to pay for services they don’t receive, and help consumers find the best flight options. That will create a more competitive market, with better outcomes for American consumers.

These actions are a direct answer to the President’s Executive Order that called for more competition that helps consumers, workers, and entrepreneurs -- and they address an issue he really cares about:

Here's how these new actions will help consumers:

Passengers should not be charged for services they do not receive. For example, if passengers are charged a fee by an airline for their checked baggage, they should expect to receive that baggage in a timely manner. The Administration has already taken steps to require airlines to reimburse bag fees when bags are lost; today, DOT is issuing an Advance Notice of Proposed Rulemaking to require airlines to refund baggage fees when a passenger’s luggage is substantially delayed.

the big U.S. airlines would be required to report performance for any plane that flies under their banner -- ensuring that the large carriers have to faithfully report on all domestic flights under their brand, not just the ones they select. To meet this goal, the new rule will require the big airlines to report data for flights of their domestic code-share partners (i.e. flights by generally smaller, regional airlines that are sold under the brand of the larger airline) to make these airline performance reports more complete.

Prohibit online ticket agents --- the platforms on which many consumers compare and book flights -- from undisclosed biasing of flight offerings on behalf of certain airlines to make shopping for air travel more transparent and fair for consumers.

4. Better protection for travelers with disabilities

Require large U.S. airlines to report on how often they mishandle wheelchairs so air travelers with disabilities can easily compare carriers and make informed travel decisions.

The 2009 and 2011 rules prohibited airlines from forcing passengers to remain stranded onboard aircraft on the tarmac for more than three hours on domestic flights and more than four hours on international flights, with exceptions for safety, security and air traffic control related-reasons. The tarmac delay rule has virtually eliminated excessive tarmac delays.

The Department’s pro-passenger rules have also made travel simpler and easier for consumers in a number of other ways including by:

The Administration has also had a get-tough approach to enforcing consumer protection rules which has led to millions of dollars in sanctions. Since 2009, the Department has taken more enforcement actions, through cease and desist orders, than in the preceding 12 years combined­. These orders have assessed over $32.5 million in civil penalties for violations of airline consumer protection and disability rules. Among these are precedent-setting orders against airlines for violations of rules regarding the enplaning and deplaning of travelers with disabilities, the fair treatment of family members and survivors in the wake of aviation disasters, and rights of passengers during tarmac delays.

Have thoughts or questions about these actions? The Administration will be hosting a live Q&A today at 1:00 PM EST on FlyerTalk. Officials from the Department of Transportation will be on hand to chat. Learn how you can join in here.