Chart: Here's Where Insured Americans Get Covered and How the Affordable Care Act Impacts Them

October 27, 2016 at 3:44 PM ET by Tanya Somanader
Twitter Facebook Email
Summary:
For the first time ever, more than 90 percent of Americans have health insurance. Take a look at how they're covered and how the Affordable Care Act has made an impact.

Learn more: Listen to a call with President Obama and Department of Health and Human Services Secretary Sylvia Burwell what we can do to help more people get covered this open enrollment period. 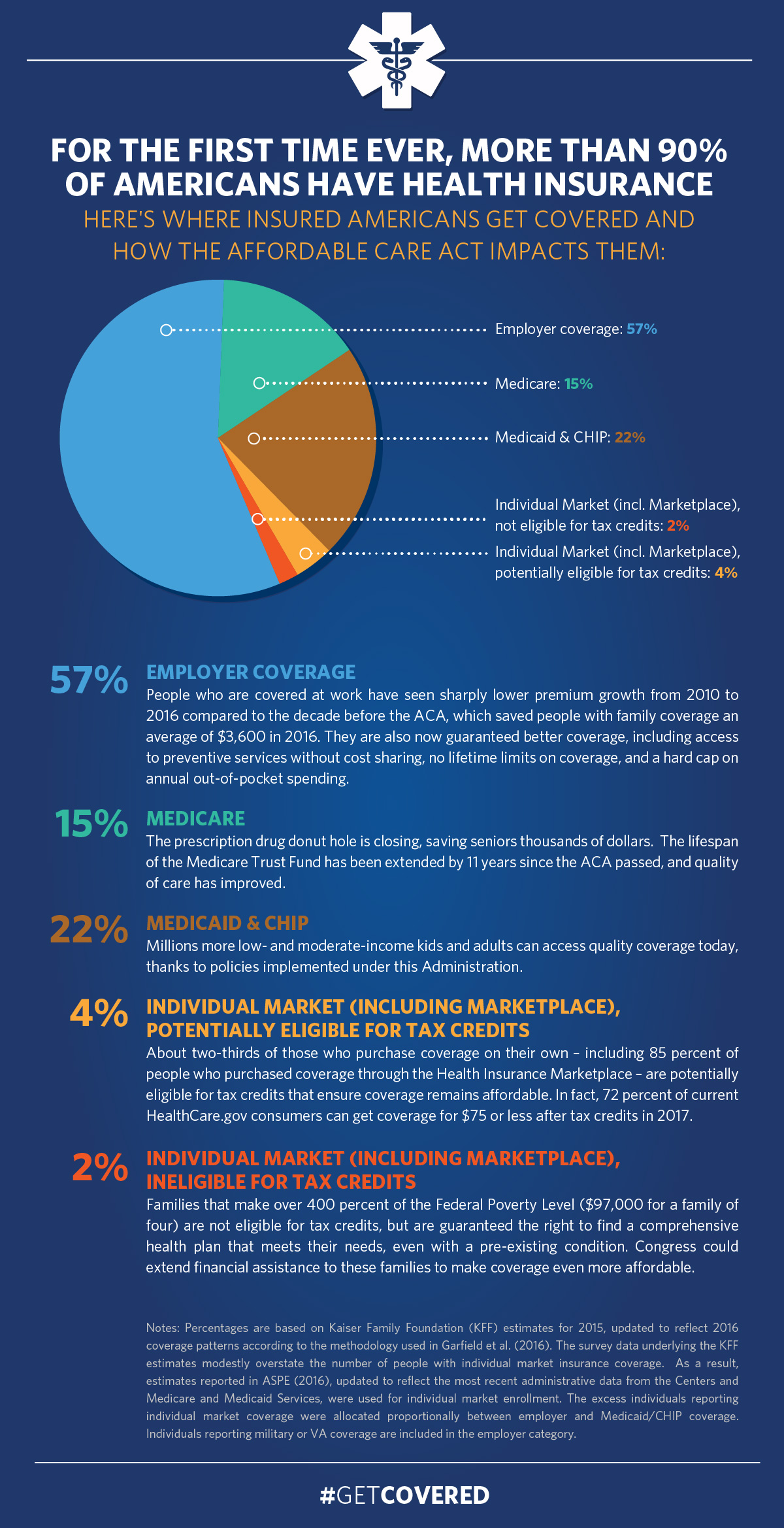 Full text of the graphic:

For The First Time Ever, More Than 90% Of Americans Have Health Insurance

Here's where insured Americans get covered and how the Affordable Care Act impacts them:

People who are covered at work have seen sharply lower premium growth from 2010 to 2016 compared to the decade before the ACA,w hich saved peple with family coverage an average of $3,600 in 2016. They are also now guaranteed better coverage, including access to preventive services without cost sharing, no liftime limits on coverage, and a hard cap on annual out-of-pocket spending.

The prescription drug donut hole is closing, saving seniros thousands of collars. The lifespan of the Medicare Trust Fund has been extended by 11 years since the ACA passed, and quality of care has improved.

Millions more low- and moderate-income kids and adults can access quality coverage today, thanks to policies implemented under this Administration.

About two-thirds of those who purchase coverage on their own - including 85 percent of people who purchased coverage through the Health Insurance Marketplace - are potentially eligible for tax credits that ensure coverage remains affordable. In fact, 72 percent of current HealthCare.gov consumers can get coverage for &75 or less after tax credits in 2017.

Families that make over 400 percent of the Federal Poverty Level ($97,000 for a family of four) are not eligible for tax credits but are guaranteed the right to find a comprehensive health plan that meets their needs, even with a pre-existing condition. Congress could extend financial assistance to these families to make coverage even more affordable.

Note: Percentages are based on Kaiser Family Foundation (KFF) estimates for 2015, updated to reflect 2015 coverage patterns according to the methodology used in Garfield et al. (2016). The survey data underlying the KFF estimates modestly overstate the number of people with individual market insurance coverage. As a result, estimates reported in ASPE (2016), updated to reflect the most recent administrative data from the cetners of Medicare and Medicaid Services, were used for individual market enrollment. The excess individuals reporting individual market coverage were allocated proportionally between employer and Medicaid/CHIP coverage. Individuals reporting military or VA coverage are included in the employer category.

Join a call with the President on the Affordable Care Act and learn what you can do ahead of the open enrollment period.

Watch President Obama's speech in Miami, Florida on our progress since the Affordable Care Act.

Read the transcript of the President's speech.

Watch behind-the-scenes footage from the day the Affordable Care Act was passed and signed into law.