December 2, 2016 at 9:30 AM ET by Jason Furman
Twitter Facebook Email
Summary:
The economy added 178,000 jobs in November, extending the longest streak of total job growth on record, as the unemployment rate fell to 4.6 percent.

The economy added a solid 178,000 jobs in November as the longest streak of total job growth on record continued. U.S. businesses have now added 15.6 million jobs since early 2010. The unemployment rate fell to 4.6 percent in November, its lowest level since August 2007, and the broadest measure of underemployment fell for the second month in a row. Average hourly earnings for private employees have increased at an annual rate of 2.7 percent so far in 2016, faster than the pace of inflation. Nevertheless, more work remains to ensure that the benefits of the recovery are broadly shared, including opening new markets to U.S. exports; taking steps to spur competition to benefit consumers, workers, and entrepreneurs; and raising the minimum wage.

FIVE KEY POINTS ON THE LABOR MARKET IN NOVEMBER 2016

1. U.S. businesses have now added 15.6 million jobs since private-sector job growth turned positive in early 2010. Today, we learned that private employment rose by 156,000 jobs in November. Total nonfarm employment rose by 178,000 jobs, in line with the monthly average for 2016 so far and substantially higher than the pace of about 80,000 jobs per month that CEA estimates is necessary to maintain a low and stable unemployment rate given the impact of demographic trends on labor force participation.

In November, the unemployment rate fell to 4.6 percent, its lowest level since August 2007. The labor force participation rate ticked down, though it is largely unchanged over the last three years (see point 3 below). The U-6 rate, the broadest official measure of labor underutilization fell 0.2 percentage point for the second month in a row in part due to a reduction in the number of employees working part-time for economic reasons. (The U-6 rate is the only official measure of underutilization that has not already fallen below its pre-recession average.) So far in 2016, nominal hourly earnings for private-sector workers have increased at an annual rate of 2.7 percent, faster than the pace of inflation (1.6 percent as of October, the most recent data available). 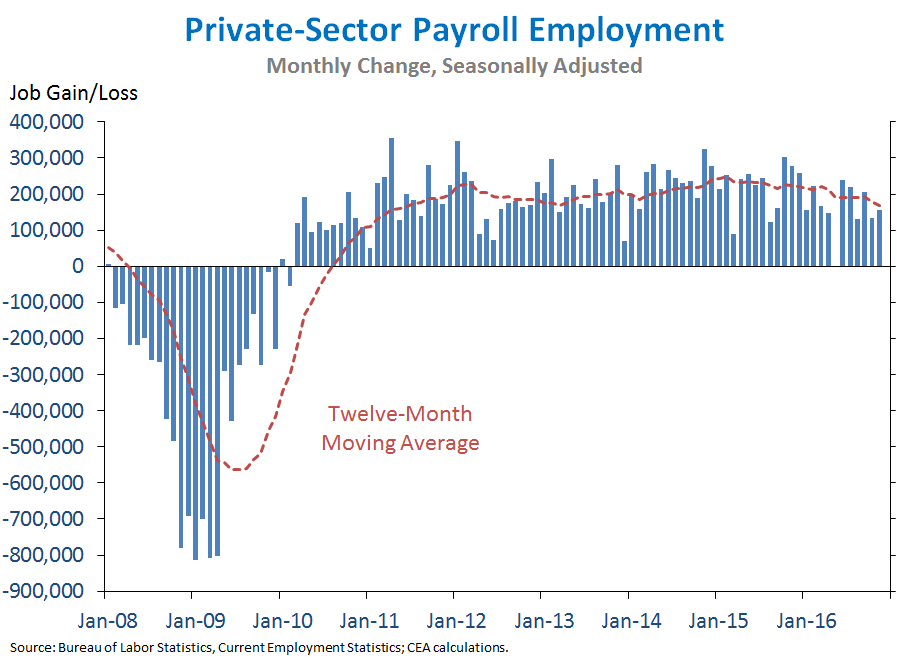 2. New CEA analysis finds that State minimum wage increases since 2013 contributed to substantial wage increases for workers in low-wage jobs, with no discernible impact on employment. In his 2013 State of the Union address, President Obama called on Congress to raise the Federal minimum wage, which has remained at $7.25 an hour since 2009. Even as Congress has failed to act, 18 States and the District of Columbia—along with dozens of local government jurisdictions—have answered the President’s call to action and have raised their minimum wages. (In addition to the States that have already raised their minimum wages, voters in four States approved measures to raise the minimum wage in November.) To assess the impact of minimum wage increases implemented by States in recent years, CEA analyzed data from the payroll survey for workers in the leisure and hospitality industry—a group who tend to earn lower wages than those in other major industry groups and thus are most likely to be affected by changes in the minimum wage. As the chart below shows, hourly earnings grew substantially faster for leisure and hospitality workers in States that raised their minimum wages than in States that did not. By comparing trends in wage growth for the two groups, CEA estimates that increases in the minimum wage led to an increase of roughly 6.6 percent in average wages for these workers. At the same time—consistent with a large body of economic research that has tended to find little or no impact of past minimum wage increases on employment—leisure and hospitality employment followed virtually identical trends in States that did and did not raise their minimum wage since 2013. (See here for more details on CEA’s analysis.) 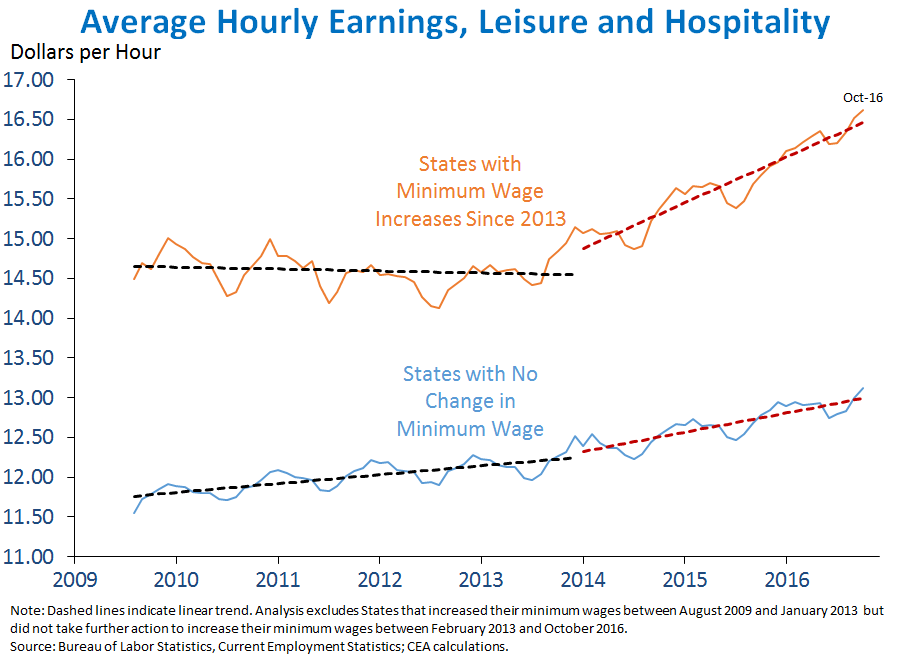 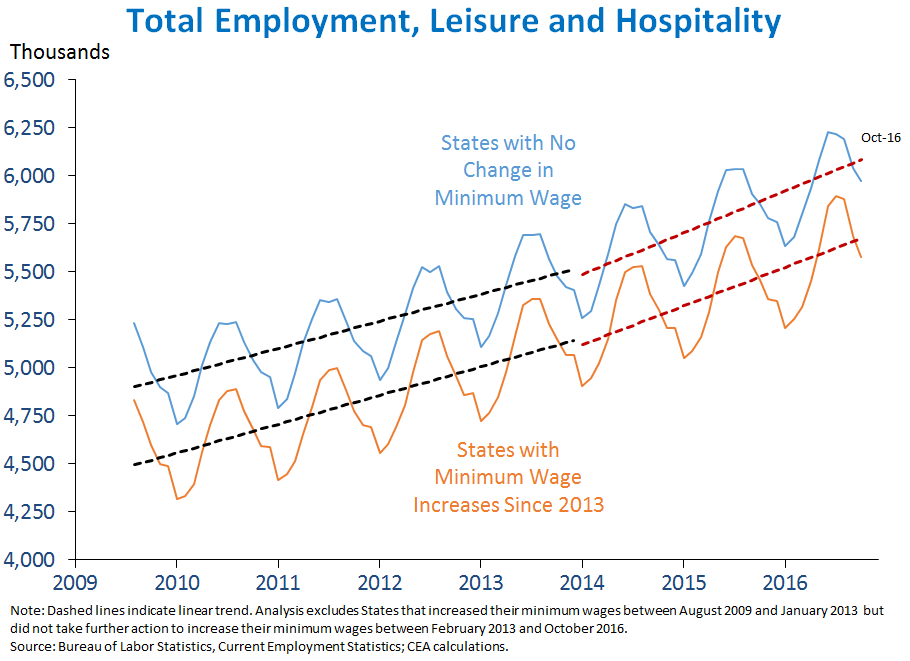 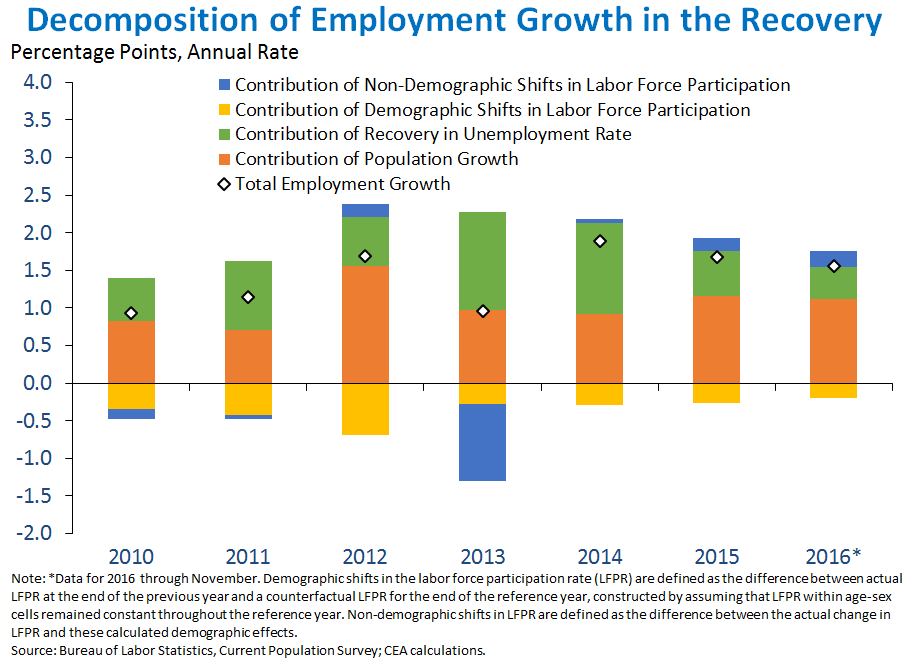 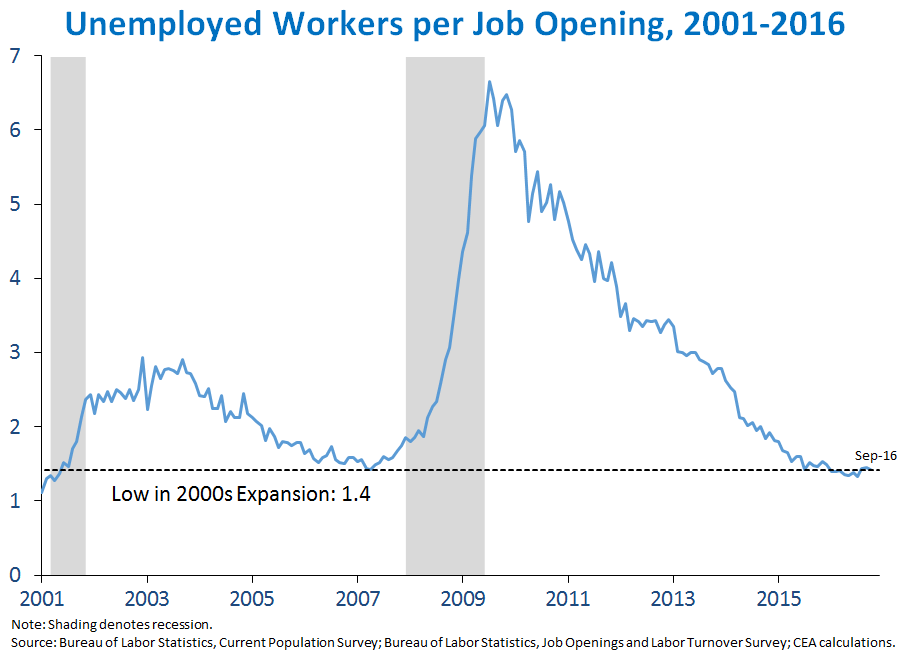 5. The distribution of job growth across industries in November diverged from the pattern over the past year. Above-average gains relative to the past year were seen in professional and business services (+49,000, excluding temporary help services), while mining and logging (which includes oil extraction) posted a gain (+2,000) for the second time in recent months amid moderation in oil prices. On the other hand, retail trade (-8,000), information services (-10,000), and financial activities (+6,000) all saw weaker-than-average growth. Slow global growth has continued to weigh on the manufacturing sector, which is more export-oriented than other industries and which posted a loss of 4,000 jobs in November. Across the 17 industries shown below, the correlation between the most recent one-month percent change and the average percent change over the last twelve months was -0.06, the lowest level since September 2012. 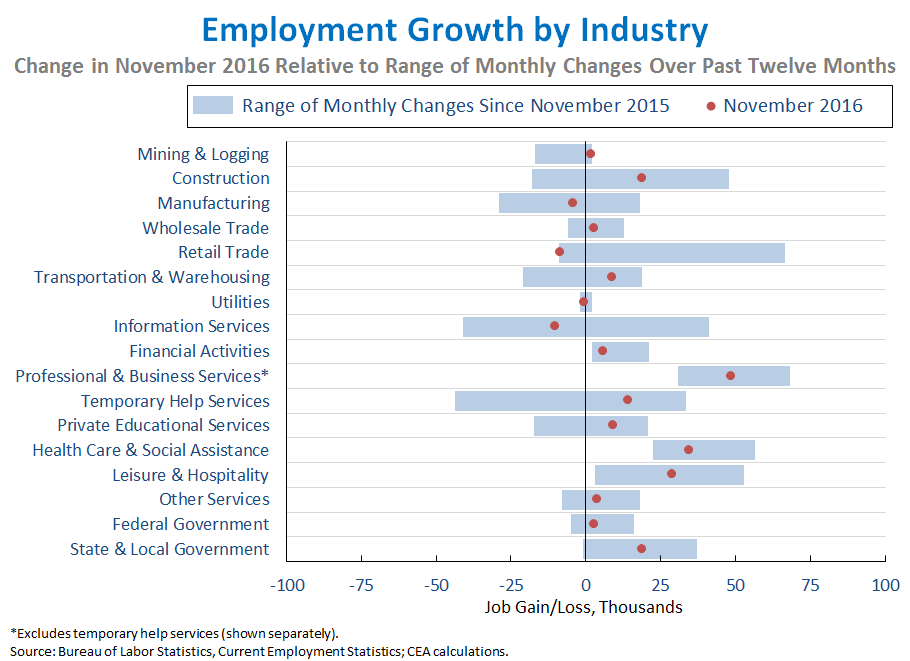