December 7, 2016 at 1:52 PM ET by Diana Doukas
Twitter Facebook Email
Summary:
Forty-four new employers have signed on to the Equal Pay Pledge, bringing the total number to over 100 businesses who have embraced equal pay policies.

Growing up, I never once thought that my gender could influence my perceived worth. I was lucky that my mother and father set a standard for me that as long as I worked hard and earned it, I could do anything or be anyone that I wanted, and expect to be treated the same as everybody else.

My mother was an amazing public school teacher, and while the hours were often long and intense, she never questioned whether her work was valued the same as her male counterparts. To a fault, I continued to believe that policies and practices like this were a given, never once wondering if it would be any different in any other sector.

The truth is that fair pay policies are not the norm. Many people are unaware that women and men are not equally paid for equal work. That is, until people start talking about it.

As Director of the White House Business Council, it has been an honor to work for a President and Administration that places such high importance on women’s equality and opportunity. The President signed into law Lilly Ledbetter Fair Pay Act as his first piece of legislation, and the work to support America’s working families has continued from there. He created a National Equal Pay Task Force, signed a Presidential Memorandum directing the Office of Personnel Management to develop a government-wide strategy to address the gender pay gap in the federal workforce, and issued an Executive Order to protect employees from being discriminated against for wanting to inquire or discuss their compensation.

And as part of the United State of Women Summit in June, the White House issued a call to action to America’s businesses, both large and small, to pledge to be open and transparent about their pay-bands and to address unconscious bias and structural barriers.

Today, we’re announcing 44 new employers who have signed on to the Equal Pay Pledge, bringing the total number to over 100 businesses who have embraced equal pay policies and who understand that doing good is also good for business. 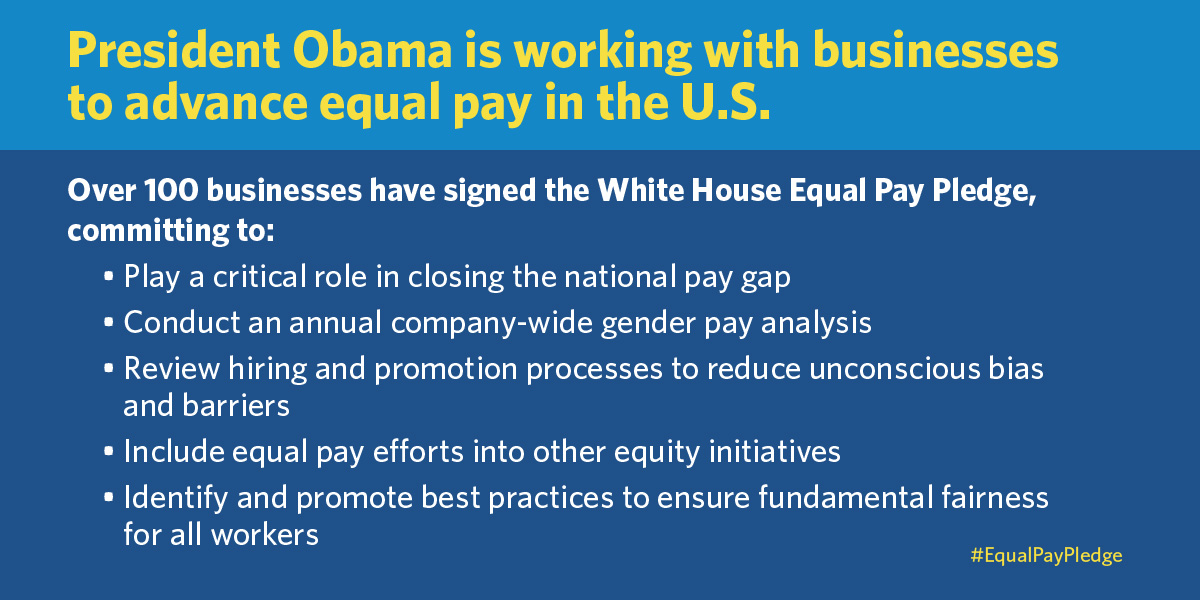 Women make up nearly half of the U.S. labor force and more women than ever are the breadwinners in their families. Companies like SoulCycle, whose studio leadership positions are 86 percent held by women, understand that empowering women leads to a thriving culture and business.
And if companies already implement these types of policies, they understand that those policies are just the beginning, not the end. Companies like Adobe have already published their pay data but will continue their commitment to these measures. Companies like Autodesk know that reviewing their data regularly is important, but so is the constant self-reflection to make sure they are living up to their own standards.

I am proud to stand with the over 100 businesses who are taking on a critical role to reduce the national gender pay gap and create a world where our daughters have the same chance to pursue their dreams as our sons.

Learn more about the Equal Pay Pledge, and see the full list of companies that have signed on.

Director of the White House Business Council and Policy Advisor