This Administration has seen remarkable progress in reducing inequities in K-12 outcomes. For example, high school graduation rates have reached a record high of 83.2 percent, with outcomes for black and Hispanic students improving the most in recent years. Despite these gains, gaps in educational opportunities persist, and more work is needed to make sure that every child has a fair shot at success. Earlier CEA analysis highlights that gaps in learning outcomes have already emerged at the time of school entry, and they persist or even widen as children progress through school. Consistent with these gaps in outcomes, data from the Department of Education’s 2013-14 Civil Rights Data Collection (CRDC) confirm that there are persistent disparities in key inputs in the K-12 educational system that research has linked to academic and economic success. This blog describes the data and research on educational inequities in six types of educational inputs in K-12 schools, complementing a White House report released today that highlights the disproportionate application of school discipline practices. It focuses on inequities by geography and between the largest categories of race and ethnicity, though important gaps across additional dimensions—including other racial groups, socioeconomic status, gender, and disability—also exist.

1. Stark disparities exist in the amount of resources available to students.

The CDRC data show sizeable variation across states in per pupil expenditures in 2013-2014. At one extreme, Washington, D.C. spent about $20,600 dollars per pupil, while at the other extreme, Utah spent less than a third of this, or only $6,500. Within states there are also inequities, and in 23 states, wealthier school districts receive more funding than poorer districts. These disparities—which reflect both variation in state funding and the fact that state funding does not fully compensate for differences in local tax bases—would be even larger without targeted federal support. Inadequate and unequal funding places an important constraint on efforts to improve the quality of educational inputs, particularly for disadvantaged students. While greater financial resources are not a panacea, research confirms that funding increases can lead to improved educational outcomes—especially for students from low-income families and in poorly-resourced school districts. The evidence also suggests that increased education funding while students are in school can have the long-term effect of raising their wages and lowering poverty in adulthood. 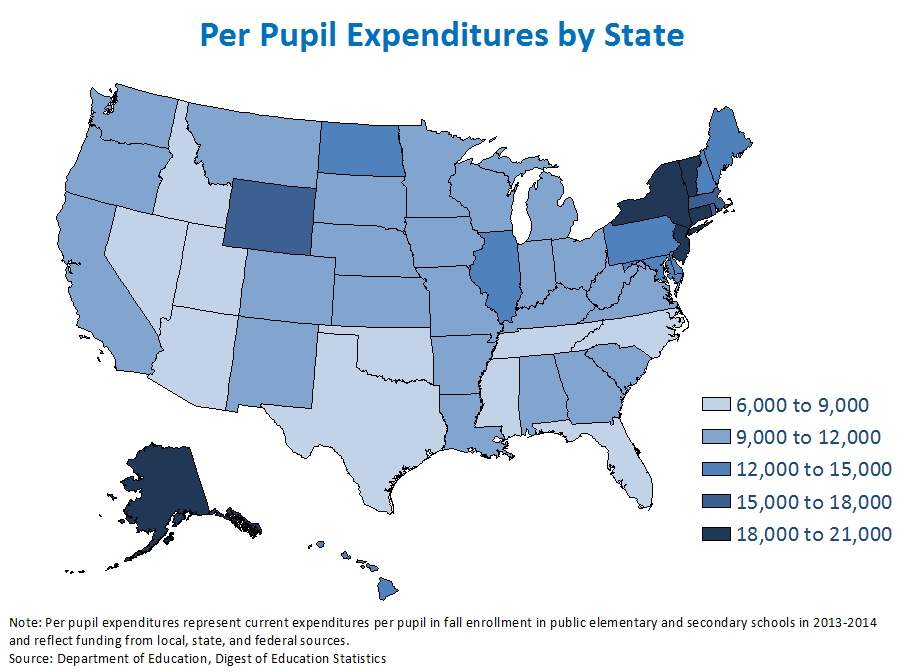 2. States with lower funding per pupil also have fewer teachers per pupil.

One mechanism through which funding can help improve student outcomes is through smaller class sizes or reduced student-teacher ratios.  At the state level, this ratio varies with the amount of funding per pupil, especially across states where spending per pupil is relatively low.  Among the 34 states that spend less than $12,000 per pupil, an extra $1,000 in per-pupil spending is associated with roughly one fewer student per teacher. Although class size is only one of many inputs that affect educational outcomes, a rigorous body of research has confirmed that smaller classes can lead not only to improved test scores but also to measures of student engagement and to greater educational attainment and higher wages later in life. Importantly, research also shows that the effects of smaller class sizes may be larger for minorities and disadvantaged students. 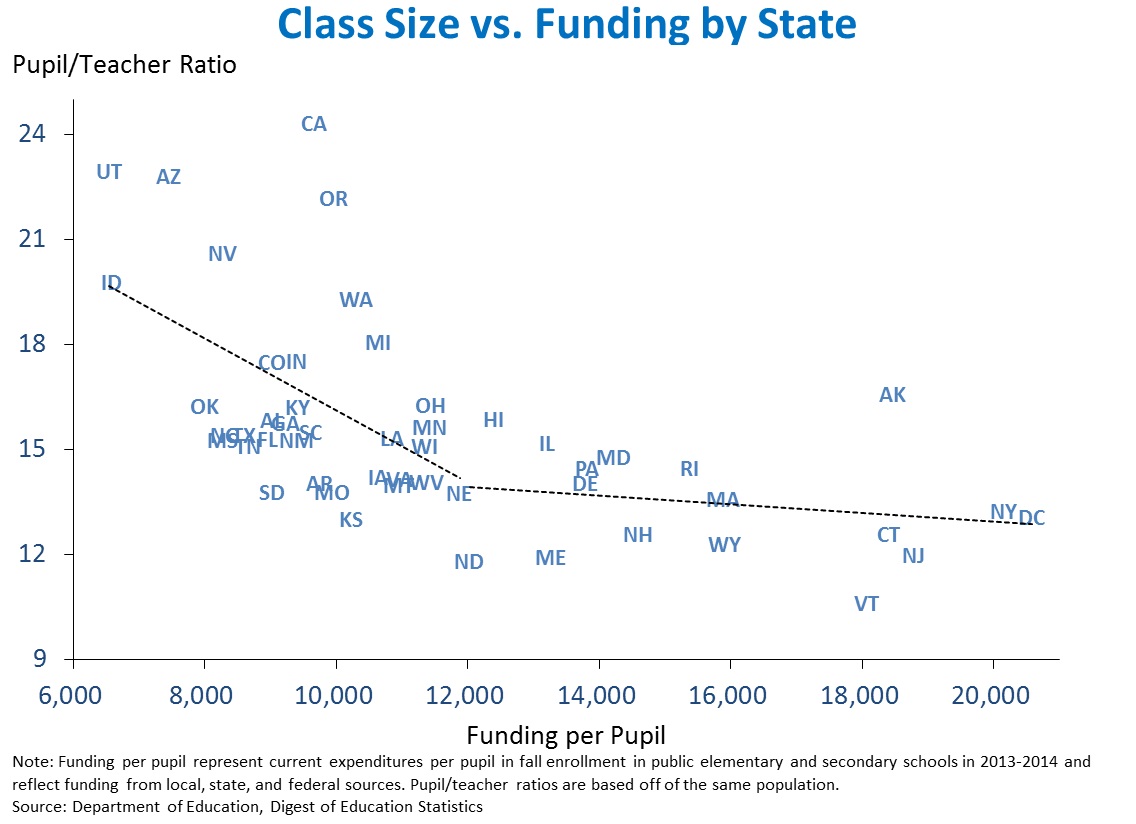 3. Black and Hispanic students are less likely to have access to experienced teachers.

Studies have found that schools with greater shares of poor and minority students have difficulty recruiting and retaining teachers with experience and strong credentials, leading to disparities in several measures of teacher quality. In the CDRC, variation across schools in the share of first-year teachers provides one measure of disparities in teacher quality, as teachers gain experience and improve effectiveness early in their careers. In 2013-14, the share of first-year teachers was strongly correlated with the share of black and Hispanic students, with nearly twice as many first-year teachers in predominantly minority schools as there were in schools with no minorities. Research has found that early-career experience has a stronger impact on teacher effectiveness than other easily-observed measures such as advanced degrees, teacher licensure test scores, and certification at the elementary level—suggesting that the disparity in exposure to first-year teachers represents a meaningful gap in access to high quality teachers. While teacher effectiveness is one of many inputs that differ across schools, research shows that racial gaps in assignment to good teachers exist even within schools. Research has also confirmed that teachers play an important role in determining not only student achievement but also future earnings and other life outcomes. 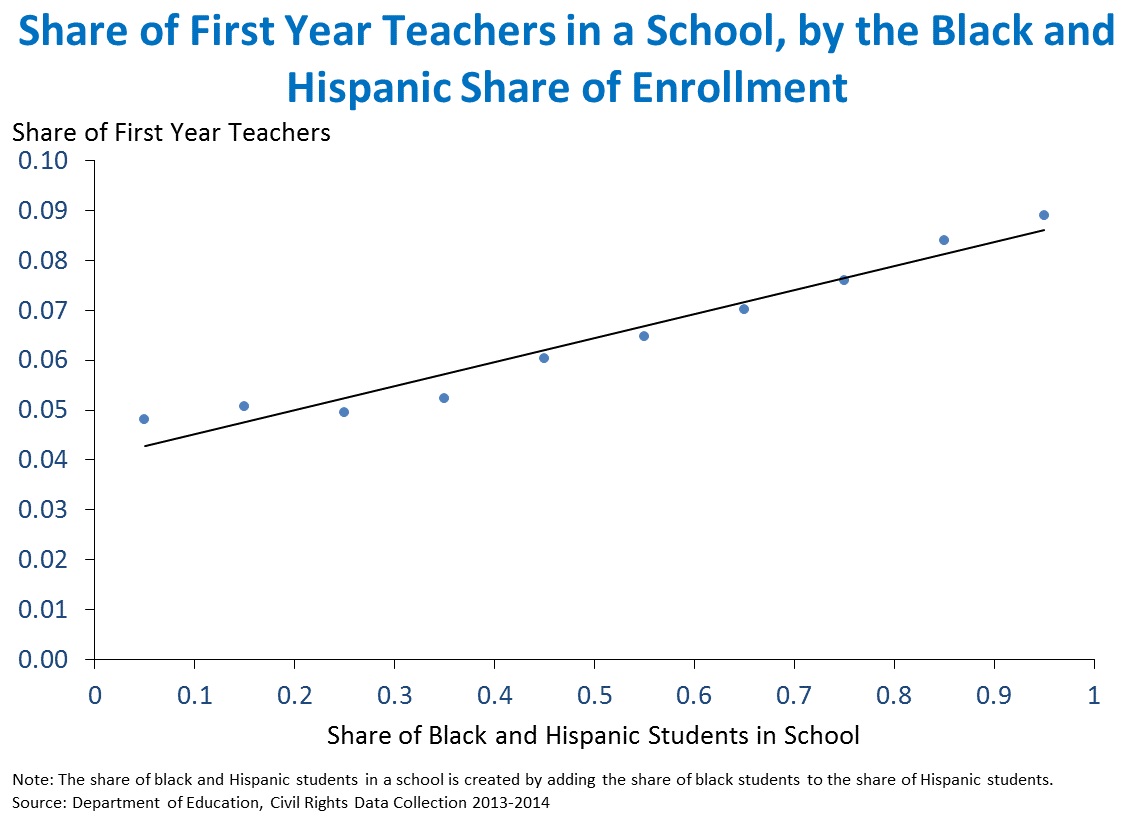 4. Enrollment in most science, technology, engineering, and math (STEM) coursework is fairly similar across race and ethnic groups; however, larger disparities persist in access to calculus and especially in the likelihood of enrollment.

Multiple studies suggest that in the future, U.S. economic growth will increasingly depend on a workforce trained in STEM fields. Research also shows that training in advanced math and science courses during high school is linked with higher earnings and later labor market outcomes in STEM fields, and some evidence points to especially large returns to calculus. Reflecting the growing importance of STEM education, most high school students in 2013-14 attended a school that offered advanced STEM courses including algebra II and chemistry. Patterns in access and enrollment in these courses are also encouraging: while there were gaps in access for Black students compared to Whites and Hispanics, these inequities were relatively modest. At the same time, access to calculus and physics remains unequal—especially for black students. Compared to white students, black students are 14 percent less likely to have access to calculus and 11 percent less likely to have access to physics.  Moreover, the gaps in calculus enrollment are especially large, with both black and Hispanic students enrolling at roughly half the rate for white students. This suggests that even when they attend schools that offer calculus, minorities face barriers to enrollment. 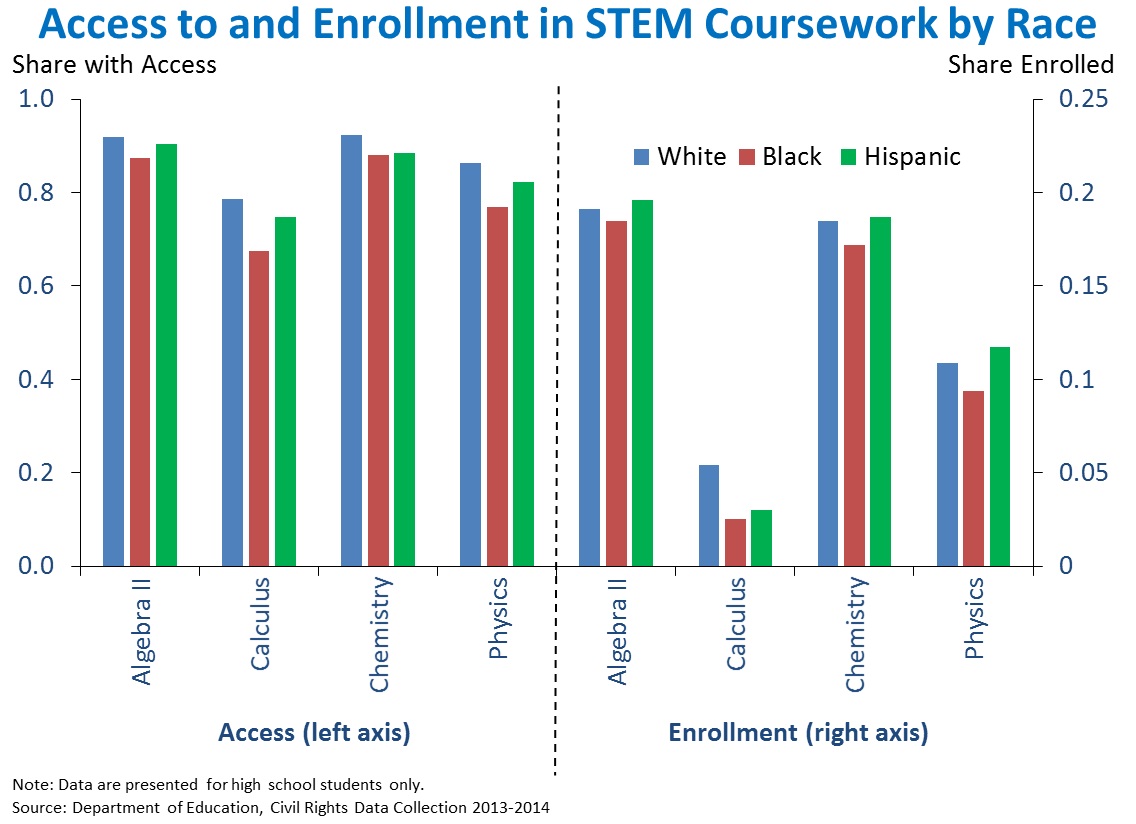 5. Black and Hispanic students are under-represented in gifted and talented programs and in college-preparatory courses such as Advanced Placement (AP).

Despite having roughly equal if not greater access to gifted and talented programs (as measured by the availability of these programs in one’s school), black and Hispanic students are more than 40 percent less likely to be enrolled in such programs. Research suggests that standard processes for identifying gifted students through parent and teacher referrals tend to miss many qualified black and Hispanic students and that a lack of racial diversity in the teacher workforce may also contribute to challenges in identifying gifted minority students. The relatively low enrollment of minority students in gifted and talented classes may contribute to inequities in student outcomes; research shows that participation in gifted classrooms significantly raises achievement for black and Hispanic students. Similarly, black and Hispanic students are also less likely to enroll in AP courses, which can increase success in higher education. Research finds that AP coursework and credits can lead to higher scores on college entrance exams, raise college enrollment, and decrease time to college completion. 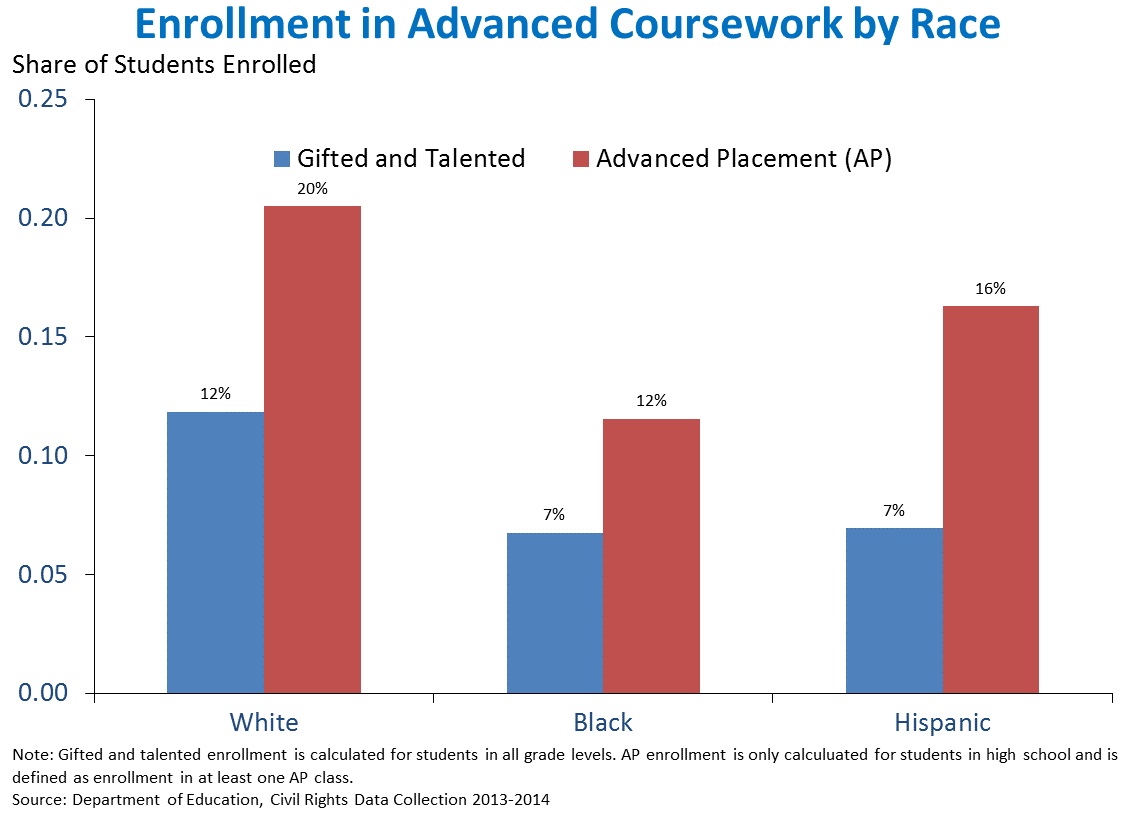 6. Schools attended by minorities have relatively more support staff dedicated to discipline and less to guidance.

In addition to providing students with meaningful coursework, schools also shape students’ behaviors to prepare them for college and their careers through a combination of guidance and discipline. Yet disparities exists in the type of support personnel available in their schools. Black students are roughly 11 percent more likely than white students to have a school law enforcement officer (SLEO) in their school, but they are no more likely to have a guidance counselor. Hispanic students are only slightly less likely to have an SLEO in their school but are 10 percent less likely to have a guidance counselor. And minorities are between roughly 20 and 40 percent more likely to be one of the 1.6 million students who attend a school where there is a school law enforcement officer but no guidance counselor. CRDC data also indicate that minorities experience different forms of school discipline: black K-12 students are 3.8 times as likely as white students to receive one or more out-of-school suspensions and 1.9 times as likely to be expelled. Research suggests that these disparities in discipline and support may have profound long-run consequences. One study finds that disparities in exclusionary discipline, or discipline which removes students from the classroom, may be an important driver of racial disparities in juvenile court referrals—a pattern that some have called the “school-to-prison pipeline.” Other research suggests that discipline problems could be compounded when resources are diverted from guidance counselors, whose presence helps to reduce disciplinary incidents and also to raise academic achievement. 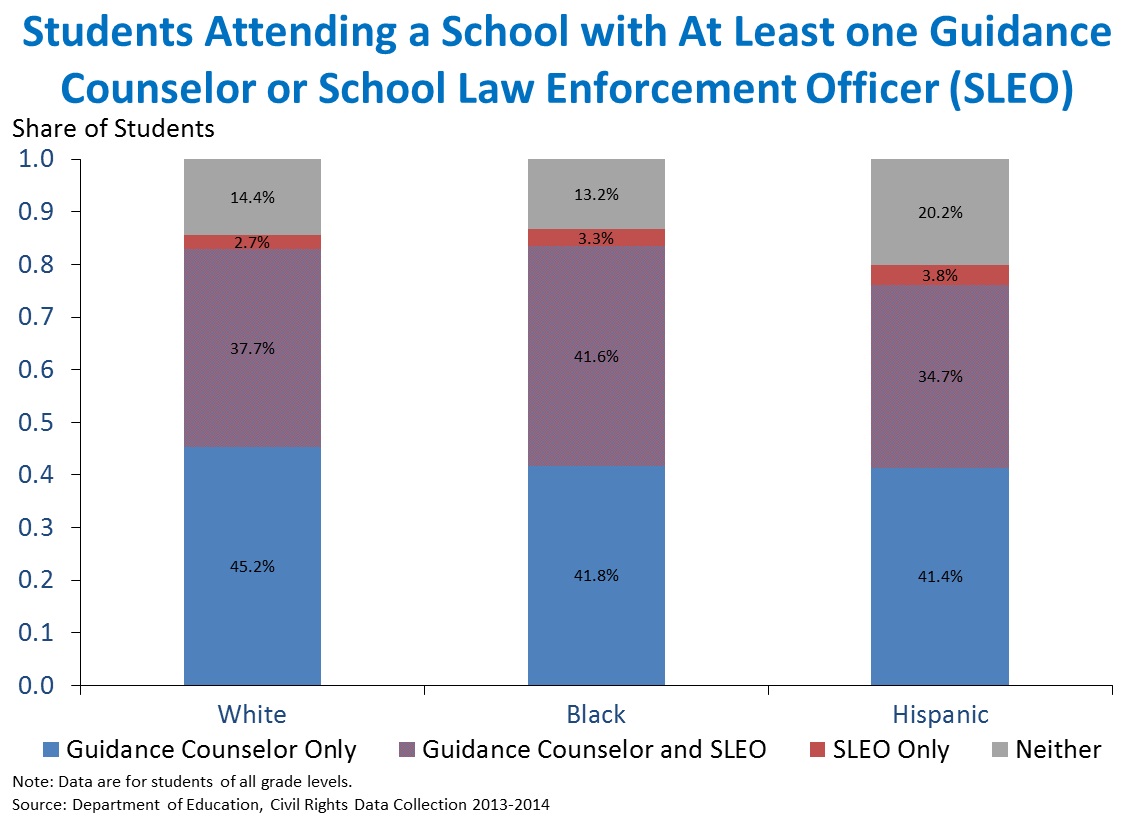 The Obama Administration has worked diligently to address inequities in the K-12 educational system and raise the bar for all students. Some policies have aimed to directly close gaps, such as School Improvement Grants, the My Brother’s Keeper Task Force, and the Promise Neighborhood Program. Others have worked to improve outcomes across the board in the form of educational funding in the Recovery Act, No Child Left Behind waivers, higher standards, the expansion of high quality educator evaluation and support systems, and recruiting 100,000 excellent STEM teachers to work in public schools over the next ten years. In addition to these programs, the Administration has placed an emphasis on collecting data and studying what works to help guide future efforts through the Investing in Innovation Fund (i3), Race to the Top, the Statewide Longitudinal Data Systems grant program, and expansions of the Civil Rights Data Collection highlighted in this blogpost. These initiatives, many of which were codified into law with the Every Student Succeeds Act in 2015, are helping to place the nation’s K-12 education system on a path towards a stronger and more equitable future.