December 13, 2016 at 8:01 PM ET by Tanya Somanader
Twitter Facebook Email
Summary:
Today, President Obama signed the Cures Act into law. These letters from Americans across the country explain why.

Today, President Obama signed into law the 21st Century Cures Act, bipartisan legislation that will go a long way toward bringing about the medical breakthroughs we need to meet some of the biggest health challenges facing Americans today. No matter what corner of the country you live in, you or someone in your life has been touched by cancer, the opioid epidemic, devastating illnesses or serious mental health issues. The Cures Act makes significant investments in innovative technologies and research that could find a cure for Alzheimer's, end cancer as we know it, and help those who are seeking treatment for opioid addiction. 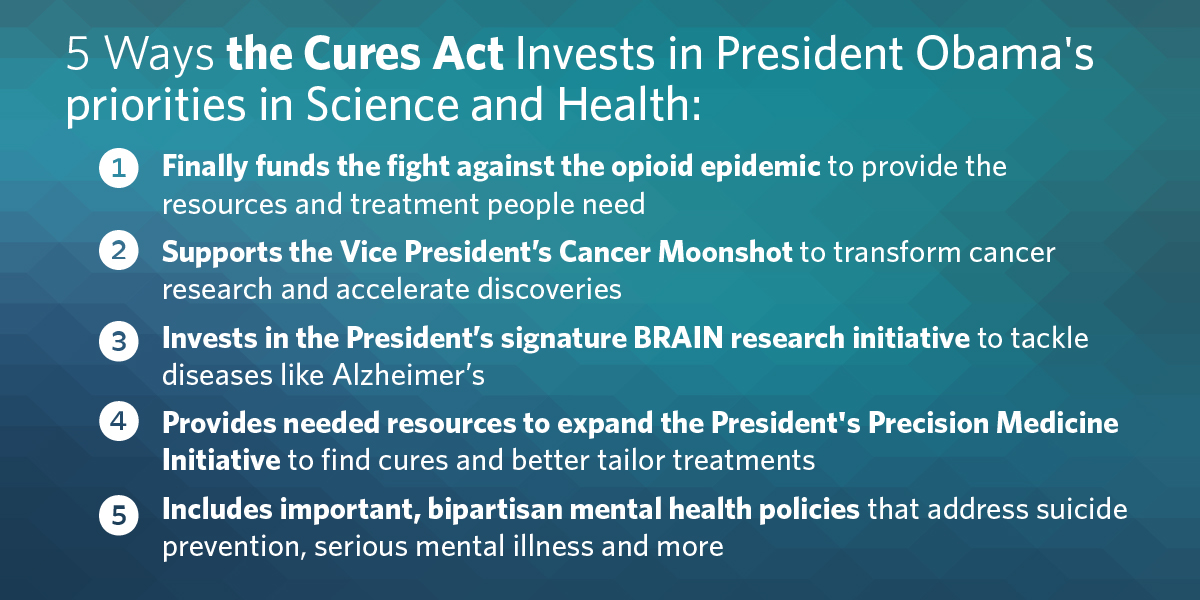 Read these three letters to learn why President Obama is so committed to investing in the future of health in America. 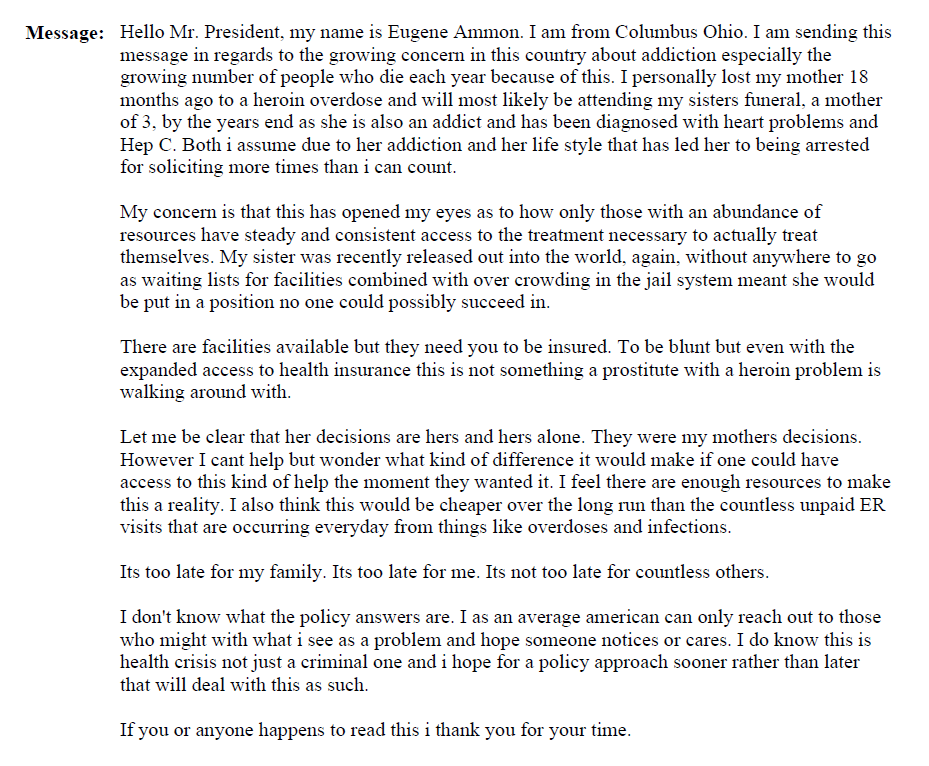 More Americans now die every year from drug overdoses than in motor vehicle crashes, and the majority involve opioids. The Cures Act invests $1 billion dollars to combat the heroin and prescription opioid epidemic, as the President’s called for in his budget. The Administration is committed to ensuring that these funds are disbursed quickly and effectively starting in early 2017. 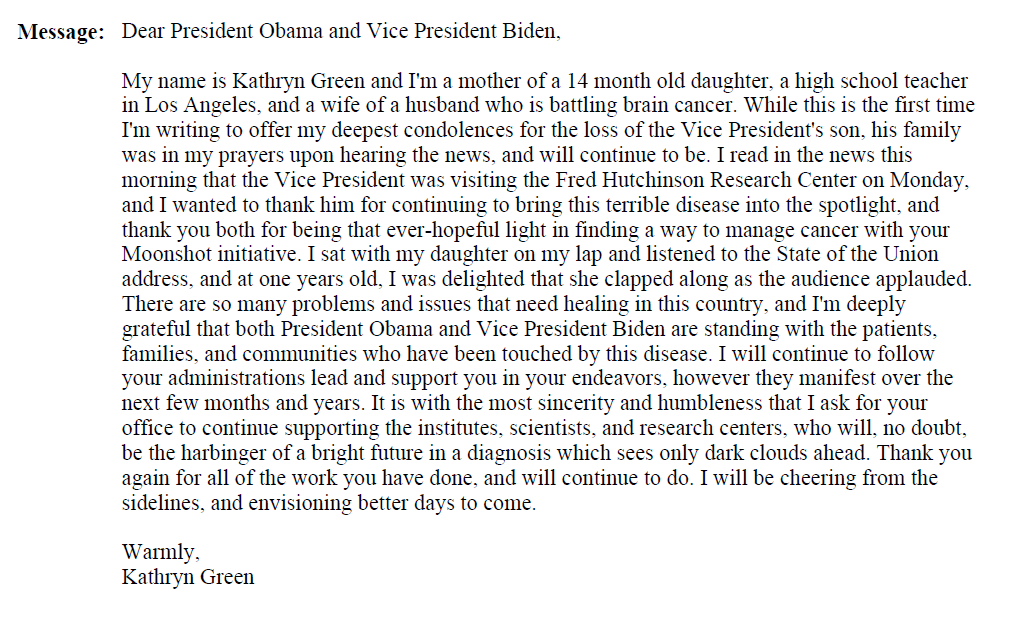 My name is Kathryn Green and I'm a mother of a 14 month old daughter, a high school teacher in Los Angeles, and a wife of a husband who is battling brain cancer. While this is the first time I'm writing to offer my deepest condolences for the loss of the Vice President's son, his family was in my prayers upon hearing the news, and will continue to be. I read in the news this morning that the Vice President was visiting the Fred Hutchinson Research Center on Monday, and I wanted to thank him for continuing to bring this terrible disease into the spotlight, and thank you both for being that ever-hopeful light in finding a way to manage cancer with your Moonshot initiative. I sat with my daughter on my lap and listened to the State of the Union address, and at one years old, I was delighted that she clapped along as the audience applauded. There are so many problems and issues that need healing in this country, and I'm deeply grateful that both President Obama and Vice President Biden are standing with the patients, families, and communities who have been touched by this disease. I will continue to follow your administrations lead and support you in your endeavors, however they manifest over the next few months and years. It is with the most sincerity and humbleness that I ask for your office to continue supporting the institutes, scientists, and research centers, who will, no doubt. be the harbinger of a bright future in a diagnosis which sees only dark clouds ahead. Thank you again for all of the work you have done, and will continue to do. I will be cheering from the sidelines, and envisioning better days to come.

In his last State of the Union address, President Obama asked Vice President Joe Biden to be at the head of "mission control" in a new moonshot effort to end cancer as we know it. The Cancer Moonshot's ultimate goal is to make a decade’s worth of advances in cancer prevention, diagnosis, and treatment, in five years. The Cures Act invests $1.8 billion in this initiative -- important funding that will support investment in promising new therapies like cancer immunotherapy, new prevention tools, cancer vaccine development, novel early detection tools, and pediatric cancer interventions.

Michelle McRee first wrote the President in December of 2015 in frustration over her 15-year-old granddaughter's inability to receive the mental health services she needed. She questioned whether the health care law and the U.S. health care system would ever be able to address her daughters needs: "I am sick and I am disgusted with knowing that in a few weeks my grandchild will be coming home with another 'band-aid' to treat her disorders," she wrote. "I live in fear of the day that my daughter will tell me that my grandchild has taken her own life, due to a mental health disorder that she can receive only minimal treatment for."

The President responded to let her know he was listening and directed his team to help advise her on the best way to find support. This is her letter in response: 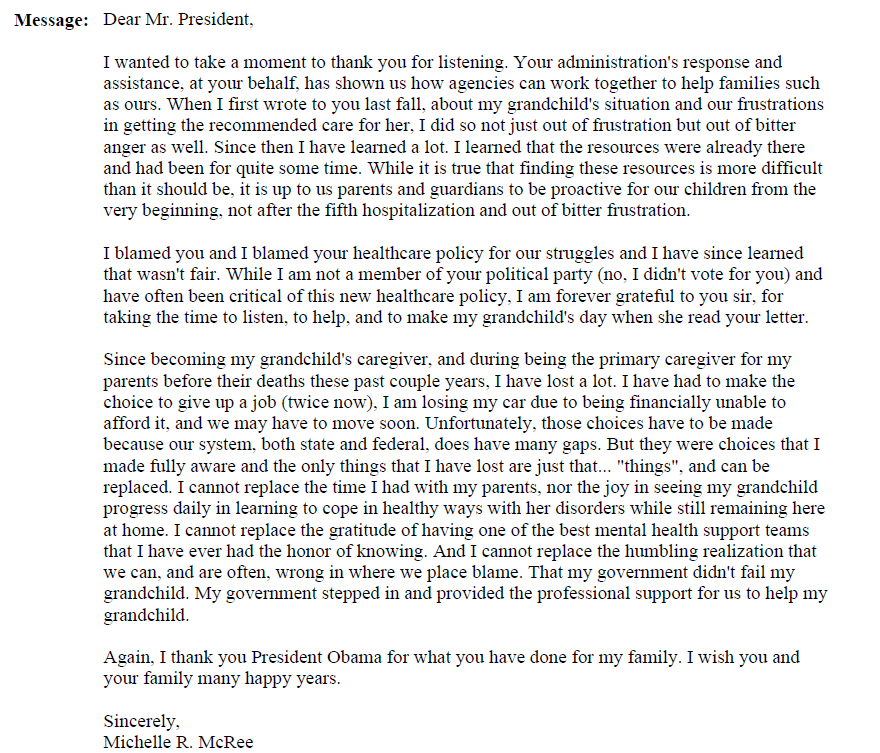 I wanted to take a moment to thank you for listening. Your administration's response and assistance, at your behalf, has shown us how agencies can work together to help families such as ours. When I first wrote to you last fall, about my grandchild's situation and our frustrations in getting the recommended care for her, I did so not just out of frustration but out of bitter anger as well. Since then I have learned a lot. I learned that the resources were already there and had been for quite some time. While it is true that finding these resources is more difficult than it should be, it is up to us parents and guardians to be proactive for our children from the very beginning, not after the fifth hospitalization and out of bitter frustration.

I blamed you and I blamed your healthcare policy for our struggles and i have since learned that wasn't fair. While I am not a member of your political party (no, I didn't vote for you) and have often been critical of this new healthcare policy, I am forever grateful to you sir, for taking the time to listen, to help, and to make my grandchild's day when she read your letter.

Since becoming my grandchild's caregiver, and during being the primary caregiver for my parents before their deaths these past couple years, I have lost a lot. I have had to make the choice to give up a job (twice now), I am losing my car due to being financially unable to afford it, and we may have to move soon. Unfortunately. those choices have to be made because our system, both state and federal, does have many gaps. But they were choices that I made fully aware and the only thing that i have lost are just that ... "things", and can be replaced. I cannot replace the time I had with my parents, nor the joy in seeing my grandchild progress daily in learning to cope in healthy ways with her disorders whil still remaining here at home. I cannot replace the gratitude of having one of the best mental health support teams that I have ever had the honor of knowing. And I cannot replace the humbling realization that we can, and are often, wrong in where we place blame. That my government didn't fail my grandchild. My goverment stepped in and provided the professional support for us to help my grandchild.

Again, I thank you President Obama for what you have done for my family. I wish you and your family many happy years.

The Cures Act also makes a significant investment of nearly $3 billion to continue the President's signature biomedical research initiatives -- the BRAIN and Precision Medicine Initiatives -- over the next decade to tackle diseases like Alzheimer's and create new research models to find cures and better target treatments.

Read what that Precision Medicine Initiative has meant in another letter writer's life here. Then dig deeper into the medical possibilities and hope that these initiatives -- and support from the Cures Act -- can deliver in the near future.