The Economic Record of the Obama Administration: Reforming The Health Care System

This morning, the Council of Economic Advisers released a comprehensive report, with an accompanying chartbook, detailing the record of the Obama Administration in reforming the health care system. As detailed in the report, the Affordable Care Act (ACA) and other Administration actions have driven historic progress in filling in the gaps in the U.S. health insurance system and building a health care delivery system that provides high-quality care at an affordable cost.

Tens of millions of Americans have coverage or have significantly better coverage because of reforms enacted under this Administration. Because of the ACA, an additional 20 million adults now have health insurance. On top of that, more than 3 million children have gained coverage since 2008 due largely to the ACA’s reforms and improvements to the Children’s Health Insurance Program enacted in February 2009. These gains have brought the uninsured rate to its lowest level in history. The report catalogues how these coverage gains are improving access to care, health, and financial security. It also describes how the ACA’s reforms have improved coverage for people who were already insured, including by ensuring that virtually all Americans with employer coverage have a limit on their annual out-of-pocket spending and by closing the Medicare Part D coverage gap for Medicare beneficiaries.

In parallel, the United States has made great strides in building a high-functioning health care delivery system. Since the ACA became law, health care prices have grown at the slowest pace since data began in 1959, and health care spending per enrollee has also grown exceptionally slowly in both the public and private sectors. Slow growth in health care costs has been accompanied by striking improvements in health care quality. The report presents evidence that this progress is thanks in significant part to the ACA’s reforms changing the way medical providers are paid and that recent years’ slow growth in health care costs is generating thousands of dollars in savings for families.

The report and chartbook provide a comprehensive overview of the improvements in the health care system in recent years. The remainder of this blog post highlights ten pieces of CEA analysis that are being released for the first time in this report. (Note: Throughout this blog post, charts are numbered as they appear in the report to facilitate locating them in the full report.)

1. The uninsured rate has declined in all income groups since 2013, demonstrating that the ACA’s reforms are working in concert to increase insurance coverage. The percentage decline in the uninsured rate since 2013 has been similar in all income groups, showing that the ACA’s reforms have been effective in reaching the uninsured at all income levels. Below 138 percent of the Federal Poverty Level (FPL), coverage gains have been driven primarily by Medicaid expansion. Coverage gains at higher income levels reflect the ACA’s interlocking reforms to the individual health insurance market: banning discrimination based on pre-existing conditions, providing financial assistance to make coverage affordable, and implementing an individual responsibility provision. In particular, the 31 percent decline in the uninsured rate among people with incomes above 400 percent of the FPL, who are not eligible for financial assistance under the law, shows that the combination of the law’s new consumer protections and individual responsibility provision have been effective in increasing coverage.

2. Expanded coverage is improving access to care, health, and financial security for the newly insured. Nationally, the share of Americans reporting that they have forgone medical care due to cost has fallen by a third since 2010, with particularly rapid declines since the ACA’s main coverage provisions took effect in 2014. As shown in the figure below, declines in the share of people forgoing care due to cost were larger in states that saw larger declines in their uninsured rates. The report documents that states seeing larger declines in their uninsured rates have also seen larger increases in the share of people reporting that they have a personal doctor and reporting that they have had a checkup in the last 12 months. The report also reviews early evidence that expanded coverage is translating into improved health and financial security, findings consistent with research examining prior, similarly targeted coverage expansions. Notably, if experience under the ACA matches what was observed under Massachusetts health reform, 24,000 deaths are already being avoided annually because of expanded coverage under the ACA. 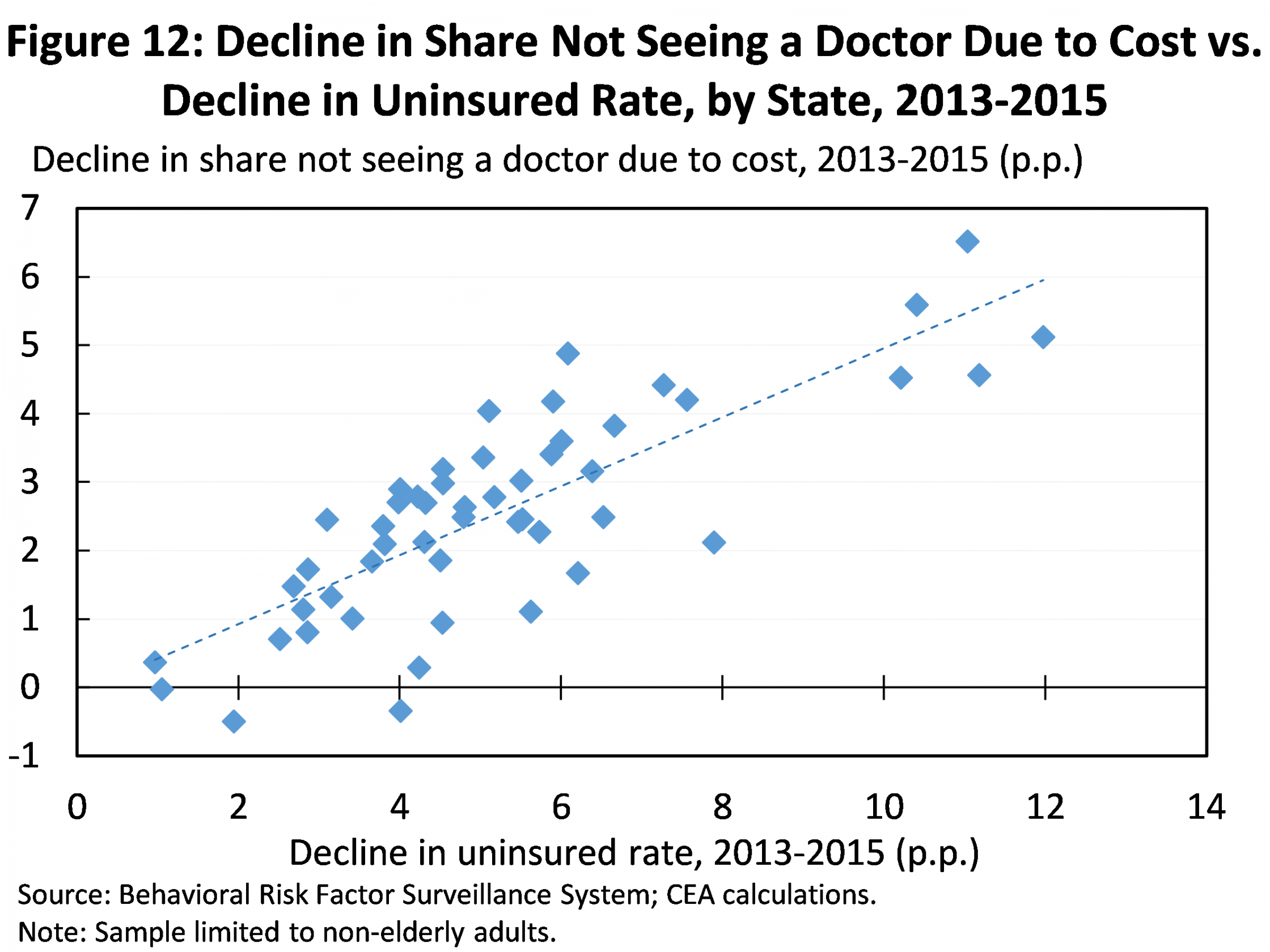 4. Increases in Health Insurance Marketplace premiums for 2017 are a one-time pricing correction, not a harbinger of future market instability. The report presents detailed evidence that the Marketplace premium increases implemented for 2017 are one-time adjustments to accommodate the phasedown of the ACA’s transitional reinsurance program and correct for initial underpricing, not a reflection of troubling trends in underlying individual market claims costs. Moreover, the report shows that, as illustrated in the figure below, the largest premium increases since 2014 have been seen in areas of the country that had the lowest premiums in 2014, the first year of the new market. This is consistent with the view that the larger premium increases in some areas reflect the fact that insurers in those areas underpriced initially, while insurers in other areas priced appropriately or even overpriced. 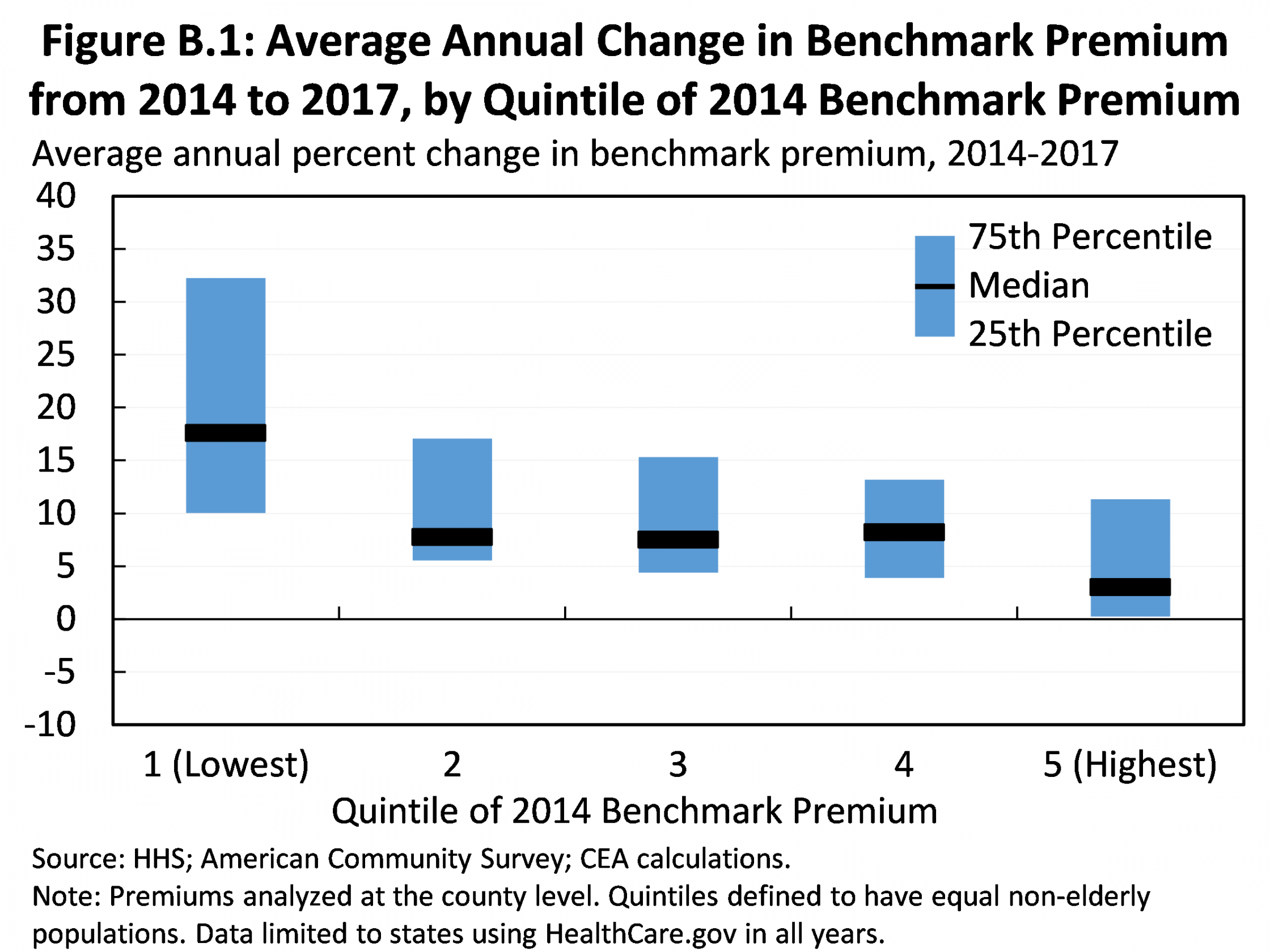 5. Not only does the ACA’s design prevent a “death spiral,” but experience to date confirms that the 2017 pricing correction does not threaten market stability. Some analysts have suggested that the premium increases occurring in 2017 could cause large reductions in individual market enrollment, particularly among healthy individuals, threatening the market’s long-term stability. The report demonstrates that these fears are ill-founded. Because about two-thirds of individual market enrollees are eligible for premium tax credits, most enrollees will not be affected by higher premiums, preventing meaningful risk pool deterioration. Consistent with this view, individual market enrollment growth differed little between states seeing larger and smaller increases in the benchmark premium in 2015, and states that saw larger premium increases actually saw slightly smaller increases in claims costs, as depicted by the black lines in the figure. By contrast, for the individual market to be at risk of a death spiral, states seeing larger premium increases would have had to have seen sharply lower enrollment growth and sharply higher growth in claims costs, akin to the scenario depicted by the red lines in the figure.

7. Recent years’ slow growth in per enrollee health care spending has been seen in all major spending categories. CEA has previously noted that per enrollee health care spending has grown exceptionally slowly in both the public and private sectors under the ACA, with real private insurance spending per enrollee growing at less than one-third the rate that it grew over the pre-ACA decade and real Medicare spending per enrollee actually falling in recent years. Today’s report takes a closer look at what specific services have driven this slowdown, finding that slower growth has been seen across all three of the largest spending categories: hospital services, physician services, and prescription drugs.

8. The average premium for job-based family coverage is $3,600 lower in 2016 than if premium growth since 2010 had matched the pre-ACA decade; accounting for trends in out-of-pocket costs increases these savings to $4,400. Premiums for employer coverage have grown much more slowly in recent years than over the decade preceding the ACA, with a particularly large slowdown in the growth of workers’ direct premium contributions. The average total premium for employer-based family coverage is around $3,600 lower in 2016 than if nominal growth since 2010 had matched the pre-ACA decade, savings that accrue to workers in the form of higher wages and lower contributions to their portion of premiums. New estimates in today’s report shows that slower growth in premiums is not being “canceled out” by faster growth in out-of-pocket spending. In fact, growth in total spending—encompassing both premiums and out-of-pocket costs—has fallen by more than growth of premiums alone, as illustrated in the figure. Consistent with this, accounting for trends in out-of-pocket costs during the post-ACA period increases the 2016 savings for a family with employer-based coverage to $4,400. 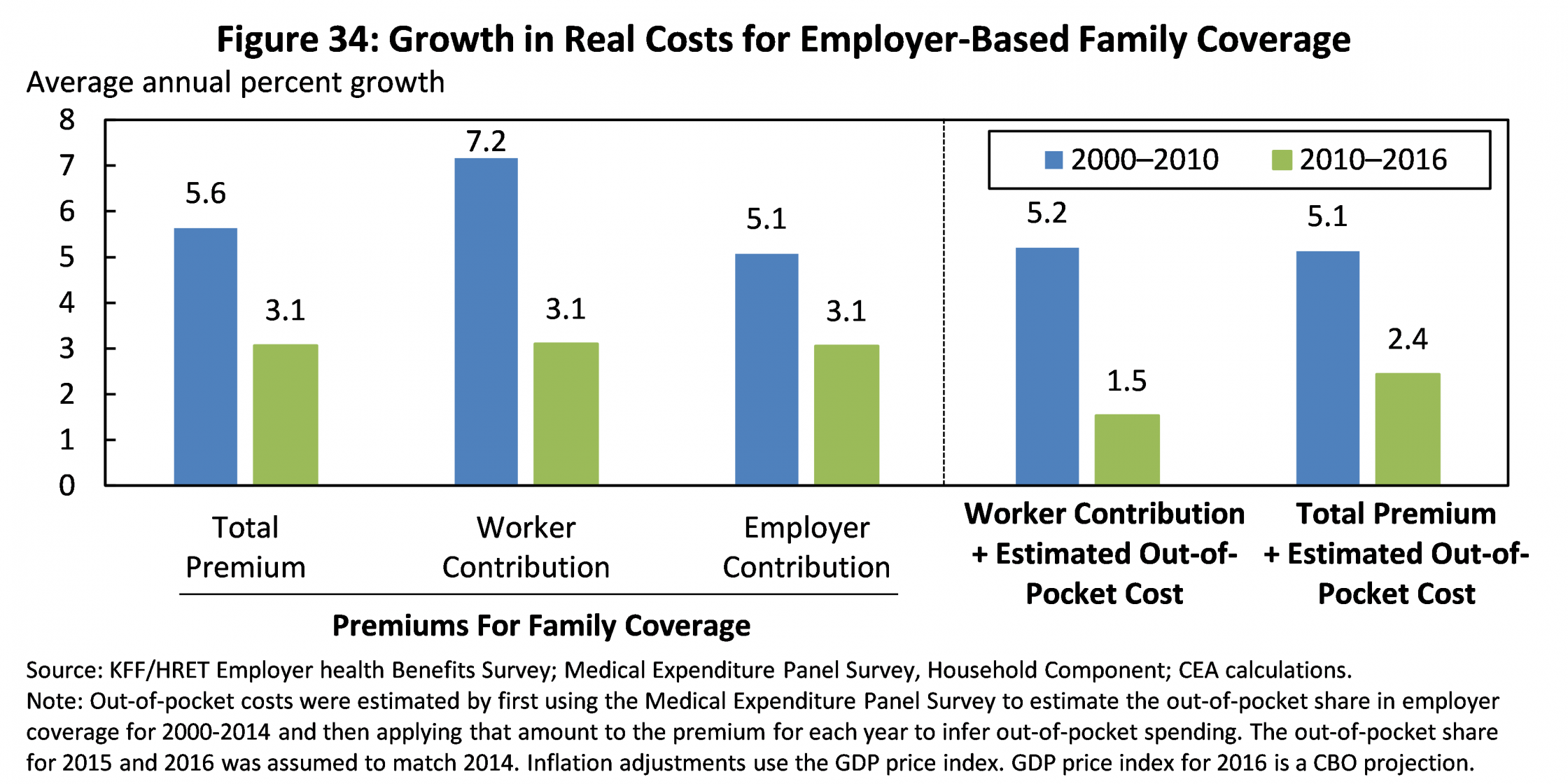 9. The typical Medicare beneficiary enrolled in traditional Medicare will incur $700 less in premiums and out-of-pocket costs in 2016 due to slower growth in health care costs. Because of recent years’ slow growth in health care costs, per beneficiary Medicare spending is far below earlier projections. The premiums and cost sharing that Medicare beneficiaries pay depend directly on underlying per beneficiary costs, so lower overall Medicare spending leads to large savings for beneficiaries. The typical beneficiary enrolled in traditional Medicare will incur approximately $700 less in premiums and cost sharing in 2016 than if cost trends in Medicare had matched projections issued in 2009. As discussed in the report, this estimate does not incorporate reductions in cost sharing for prescription drugs due to the ACA’s provision closing the Medicare Part D coverage gap and lower-than-expected prescription drug spending. Including those savings would make this estimate even larger. 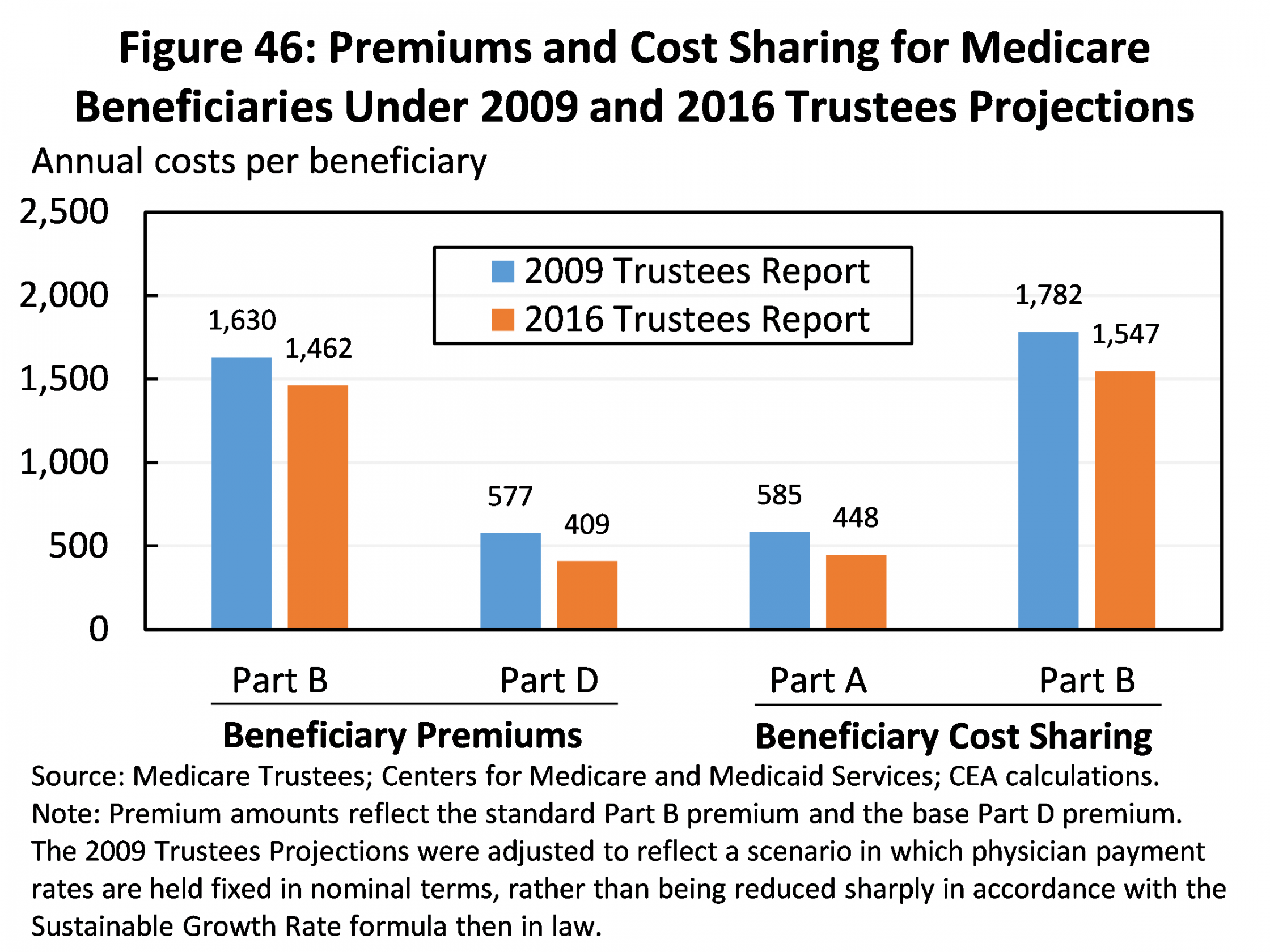 10. New data show continued improvement in the quality of care in hospitals, which has led to approximately 125,000 avoided deaths from 2010 to 2015. New data released yesterday by the Agency for Healthcare Research and Quality (AHRQ) show that the rate of hospital-acquired conditions, like infections and complications due to medication errors, continued to decline in 2015. The overall rate of hospital-acquired conditions has fallen by 21 percent since 2010, which AHRQ estimates has led to approximately 125,000 avoided deaths through 2015. Today’s CEA report presents evidence that these declines result, at least in part, from value-based purchasing payment reforms introduced under the ACA, as well as an ACA-supported initiative to help hospitals identify and share best practices for avoiding patient harm. 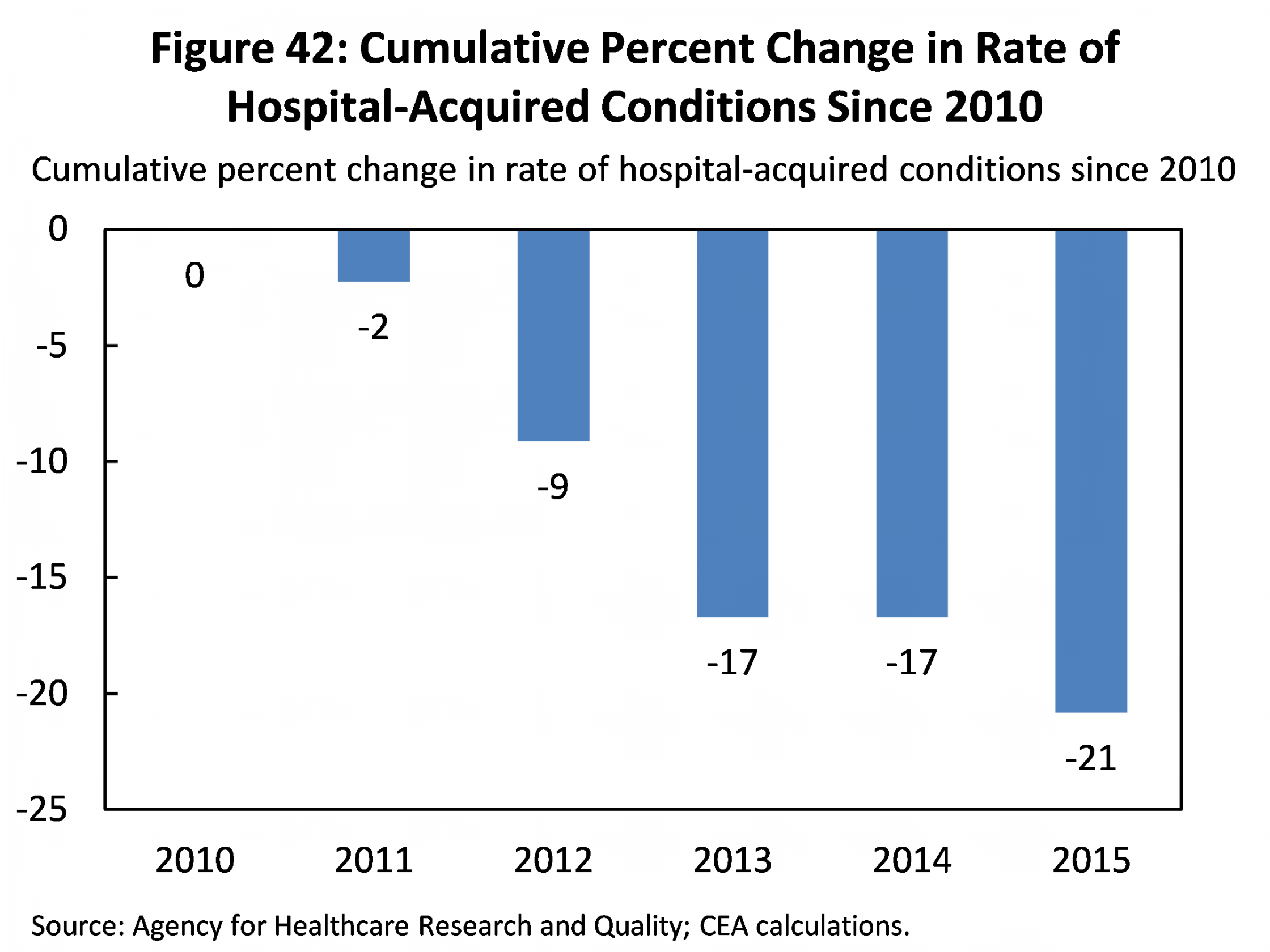