December 13, 2016 at 7:00 AM ET by Abdullah Hasan
Twitter Facebook Email
Summary:
Today, we hosted an event to honor the public service of Federal employees, and shine a light on their work and accomplishments.

Our Nation’s civil servants have chosen a noble calling – a calling dedicated to bettering Government services for the American people. They run our airports and embassies, take care of our troops and their families, defend our borders, make sure our roads and railways are designed and built safely, and advance the frontiers of science and innovation. They’ve worked to swiftly transport American aid workers with Ebola to the United States for life-saving treatment, and helped engineer a new spacecraft that could carry humans farther into space than we’ve ever seen before. They’re finding ways to process health benefits applications for disadvantaged tribal populations more efficiently and effectively, and making important strides in ending veterans’ homelessness.

Our Federal workforce’s commitment to public service is making Government work better for the American people, and bringing lasting change to the lives of ordinary people across the nation.

We ask you to join us as we celebrate America’s remarkable workforce. Here’s how:

1. Watch the President’s message to Federal employees thanking them for their commitment to public service.

3. Learn about the many ways Federal employees are making Government work better for the American people. 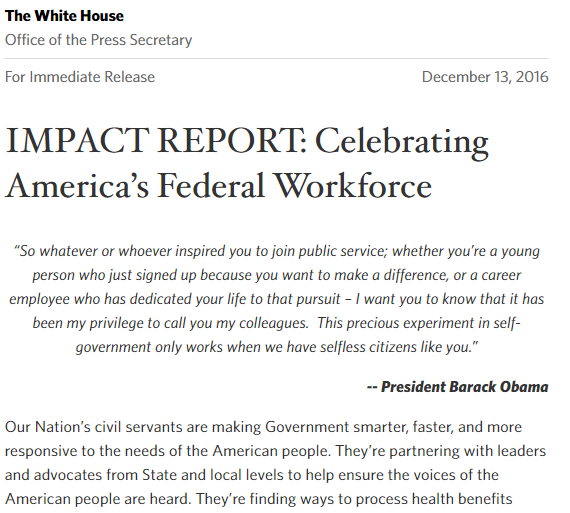 4. Hear from Federal employees about what inspires them to pursue a career in public service.

5. Join us on Twitter by using the hashtag #FederalService.

Today @POTUS highlighted importance of #FederalService. Thanks @EPA staff for your commitment to protecting public health & the environment! https://t.co/HCPwmUub8X

Our Nation’s civil servants are making Government smarter, faster, and more responsive. Join me in saying thanks. https://t.co/IZuzfGuznA

Thanks to the dedicated USAID employees who work every day to make our world a better, safer place. #FederalService https://t.co/eT71OjeRgs

Abdullah Hasan is the Assistant Press Secretary at the White House Office of Management and Budget.