The 2017 Economic Report of the President

December 15, 2016 at 10:00 AM ET by Jason Furman, Sandra Black, Jay Shambaugh, Matt Fiedler
Twitter Facebook Email
Summary:
The 2017 Economic Report of the President reviews the economic record of the Obama Administration, focusing on how policies have promoted inclusive growth.

When he took office in early 2009, President Obama was faced with the daunting task of helping to rescue the U.S. economy from its worst crisis since the Great Depression. The forceful response to the crisis helped stave off a potential second Depression, setting the U.S. economy on track to reinvest and recover. Rebuilding from the crisis alone, though, was never the President’s sole aim. At every step, the Administration has also worked to address the structural barriers to shared prosperity that middle-class families had faced for decades: the rising costs of health care and higher education, slow growth in incomes, high levels of inequality, a fragile, risky financial system, and more. Thanks to these efforts, eight years later, the American economy is stronger, more resilient, and better positioned for the 21st century than ever before.

This morning, the Council of Economic Advisers released the 71st annual Economic Report of the President. This year’s Report reviews the economic record of the Obama Administration, focusing both on how successful policies have promoted economic growth that is robust and widely shared and on the work that remains in the years ahead.

As discussed in Chapter 1 of the Report, the robust response to the crisis in 2008 and 2009 helped avert a second Great Depression. After eight years of recovery, it is easy to forget how close the U.S. economy came to another depression during the crisis. In fact, by a number of macroeconomic measures—including household wealth, employment, and trade flows—the first year of the Great Recession saw declines that were as large as or even substantially larger than at the outset of the Great Depression in 1929-30. However, the forceful policy response by the Obama Administration and partners across the Federal Government—including the American Recovery and Reinvestment Act (ARRA) and subsequent fiscal actions, the auto industry rescue, a robust monetary policy response, and actions to stabilize the financial sector—combined with the resilience of American businesses and families to help stave off a second Great Depression. As a result, the unemployment rate has been cut from a peak of 10.0 percent in the wake of the crisis to 4.6 percent in November, falling further and faster than expected. 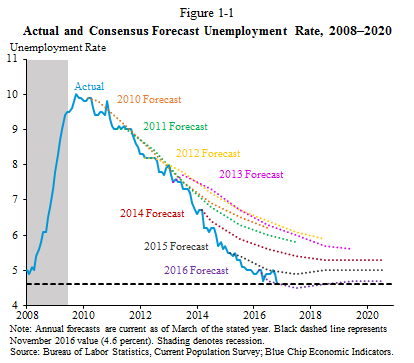 The U.S. economy has made strong progress in the eight years since the crisis across a broad range of macroeconomic measures, as discussed in Chapter 2 of the Report. As of the third quarter of 2016, the U.S. economy was 11.5 percent larger than its peak before the crisis. The economy has added 14.8 million jobs over 74 months, the longest streak of total job growth on record. Since early 2010, U.S. businesses have added 15.6 million jobs. Real wage growth has been faster in the current business cycle than in any since the early 1970s, and wage growth has accelerated in recent years. The combination of strong employment and wage growth has led to rising incomes for American families. From 2014 to 2015, real median household income grew by 5.2 percent, the fastest annual growth on record, and the United States saw its largest one-year drop in the poverty rate since the 1960s. 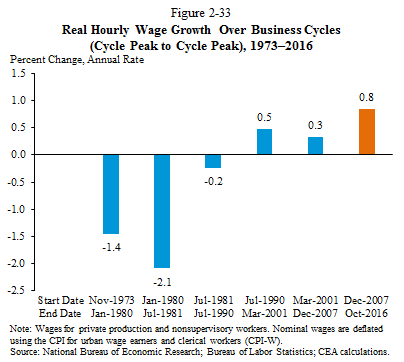 The response to the crisis averted a sharper downturn and put the economy back on a path to sustainable, shared growth. Even so, a number of decades-long trends that preceded the crisis still remained, preventing middle-class Americans from seeing gains in their incomes and standards of living. Addressing these barriers to inclusive growth has been the cornerstone of the Administration’s economic policy:

The tax and health care policies President Obama fought for and signed into law represent a historic accomplishment in reducing inequality, as discussed in Chapter 3 of the Report. Together, changes in tax policy and the coverage provisions of the Affordable Care Act (ACA) will increase the share of after-tax income received by the bottom quintile of households in 2017 by 18 percent—equivalent to more than a decade of average income gains—and the share received by the second quintile by 6 percent. At the same time, these actions will reduce the share received by the top 1 percent by 7 percent. Tax changes enacted since 2009 have boosted the share of after-tax income received by the bottom 99 percent of families by more than the tax changes of any previous administration since at least 1960, and President Obama has overseen the largest increase in Federal investment to reduce inequality since the Great Society programs of the Johnson Administration. 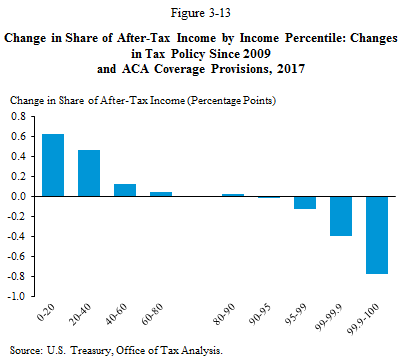 As discussed in Chapter 4 of the Report, the Administration has made extraordinary progress in ensuring that all Americans have access to affordable, high-quality health care. Because of the ACA, approximately 20 million additional adults now have health insurance, and the uninsured rate stands at its lowest level ever. Evidence demonstrates that broader insurance coverage is improving access to care, health, and financial security for the newly insured, while reducing the burden of uncompensated care for the health care system as a whole. The ACA has also provided key consumer protections and improvements for those who already had health insurance. Meanwhile, prices of health care goods and services have grown at a slower rate under the ACA than during any comparable period since these data began in 1959, and recent years have also seen exceptionally slow growth in per-enrollee spending in both public programs and private insurance. 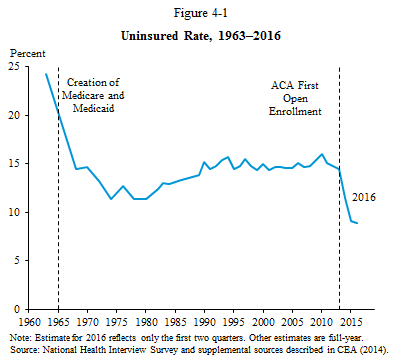 President Obama has overseen significant new investments and reforms in higher education, as noted in Chapter 5 of the Report. To help expand college opportunity, the President doubled investments in higher education affordability through Pell Grants and the American Opportunity Tax Credit (AOTC). To help more students choose a college that provides a solid investment, the Administration provided the most comprehensive and accessible information about college costs and outcomes through the College Scorecard, simplified the Free Application for Federal Student Aid (FAFSA), and protected students from low-quality schools through a package of important consumer protection regulations, including the landmark Gainful Employment regulations. To help borrowers manage debt after college, income-driven repayment options like the President’s Pay as You Earn (PAYE) plan have allowed borrowers to cap their monthly student loan payments at as little as 10 percent of discretionary income and have expanded repayment periods, better aligning the timing of student loan payments with the timing of earnings benefits from attending college (which are typically realized over a longer time horizon). CEA analysis finds that the Pell Grant expansions since 2008-09 enabled at least 250,000 students to access or complete a college degree in 2014-15, leading to an additional $20 billion in aggregate earnings, a nearly two-to-one return on investment. 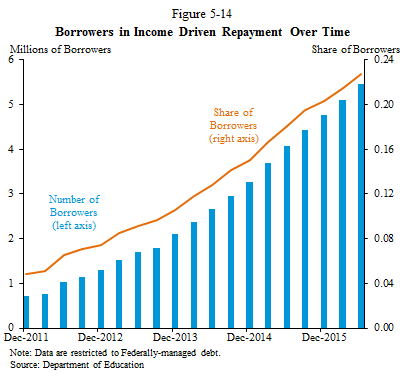 Reforms to the financial system, reviewed in Chapter 6 of the Report, have made the sector more resilient and curtailed the risky behavior that set off the crisis. Financial reforms under the Obama Administration have helped make the financial system more secure by requiring financial firms to hold more liquid assets, increase capital levels, and reduce risk-taking. The Dodd-Frank Wall Street Reform Act reshaped the regulatory landscape, bringing shadow banking institutions under the regulatory umbrella, creating a body charged with a holistic view of systemic risk, and creating a new agency charged with protecting consumers in their financial interactions. The recovering economy and implementation of financial reform have been accompanied by strong performance of a wide variety of financial market indicators. Banks are healthier and stronger; regulators are better able to monitor for systemic risk; once-opaque derivatives markets are safer and more transparent; credit ratings agencies are subject to more effective oversight and increased transparency; and investor protections have been strengthened. Banks and other financial institutions now abide by rules designed to make them safer and end the threat of “too-big-to-fail.” 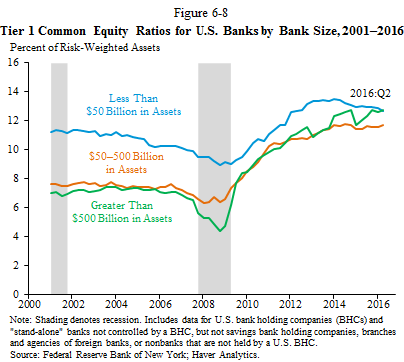 Finally, the Administration has provided global leadership in fighting climate change through a diverse set of policy approaches, as noted in Chapter 7 of the Report. In early 2009, the President signed into law a historic investment of more than $90 billion in clean energy through ARRA, helping to spur both a dramatic increase in clean energy capacity and advances in clean energy technology. The President’s 2013 Climate Action Plan mapped out a new framework for the transition to a more energy-efficient economy with lower greenhouse gas emissions. Other steps included the first-ever Federal greenhouse gas pollution standards for power plants, light-duty cars and trucks, and commercial trucks, buses, and vans; investments in research and development to support innovative clean energy technologies; enhanced incentives for renewable energy and improvements in the energy efficiency of homes and appliances; and stronger international cooperation, including via the historic Paris Agreement. The Administration has used rigorous regulatory impact analysis to ensure that environmental regulations are undertaken in an efficient and cost-effective manner. There are already signs of progress: while the U.S. economy has continued to grow, it is becoming less energy- and carbon-intensive as both our fossil fuel mix becomes cleaner (due to rising natural gas use) and renewable energy takes an increasingly large role in U.S. energy generation. U.S. carbon dioxide emissions from the energy sector fell by 9.5 percent from 2008 to 2015, and in the first half of 2016 were at their lowest level in 25 years. 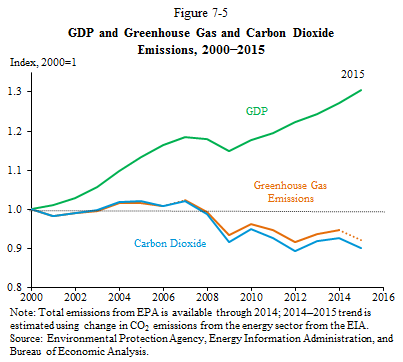 While the Administration has taken great strides in promoting stronger and more widely shared growth, much work remains in the years ahead. Productivity growth—an important determinant of increases in living standards—has slowed across advanced economies, including the United States (though U.S. productivity growth has still been faster than that of any other G-7 economy). The United States has seen a faster increase in inequality in recent decades than any of the major advanced economies, and despite the historic progress made over the last eight years, the level of U.S. inequality remains high. Labor force participation faces headwinds both from the aging of the U.S. population and from the long-run challenge of declining participation by Americans in their prime working years. And more work remains to ensure that economic growth is sustainable and does not come at the expense of future prosperity by taking steps to protect against future recessions and by addressing both the short- and long-run effects of climate change. 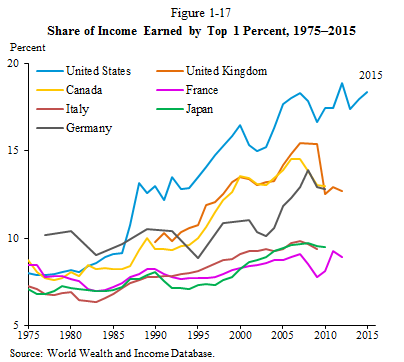 The actions undertaken by the Obama Administration in the midst of the crisis not only helped prevent a second Great Depression, they set the U.S. economy on a path to becoming stronger, more resilient, and better positioned for the 21st century. In the years ahead, promoting inclusive, sustainable growth will remain the key objective. While much work remains, the experience of the past eight years shows that, by acting decisively and by choosing the right policies for working Americans, the United States can build a stronger and more prosperous economy for generations to come.