December 16, 2016 at 3:49 PM ET by Secretary Julián Castro
Twitter Facebook Email
Summary:
Learn why HUD is teaming up with non-profits and the private sector to narrow the digital divide.

Ed. note: This was originally posted by the Department of Housing and Urban Development.

Today, as part of HUD’s ConnectHome initiative to bring high-speed internet to low-income households with school-aged children in HUD-assisted housing, T-Mobile, the City of New York, and the New York City Housing Authority (NYCHA) have committed to do their part to close the digital divide in New York. I joined Mayor Bill De Blasio, NYCHA, and T-Mobile executives to announce that 5,000 internet-connected tablets will be given to families with children living in public housing in the Bronx.

We’ve come a long way since July 2015, when President Obama launched ConnectHome 1,500 miles away from New York in Choctaw Nation. At the time, President Obama stressed the urgency of closing what’s known as the “homework gap.” It’s the digital divide at home that prevents children from accessing the tools and resources needed to be successful at school. At HUD, we know that in a 21st century global economy, this gap is quickly leaving too many folks behind. High-speed internet access is no longer a luxury — it’s a necessity.

Today’s announcement reflects the promise of ConnectHome by bringing the private and public sectors together to unlock the power of high-speed internet for low-income families. Each tablet has been donated by our latest national stakeholder, T-Mobile, and will be connected to high-speed internet through sharply discounted service paid for by the City of New York. Together, the commitment will have a tremendous impact, opening the doors of opportunity for thousands of deserving kids and families in New York.

It also builds on tremendous collaboration seen in the 28 ConnectHome pilot communities across the country. internet Service Providers, including Cox Communications, AT&T, Google Fiber, and Comcast, have each extended free or low-cost internet offers that together reach 43 states and hundreds of thousands of public housing residents. In addition, to ensure that families make the most of their new connections, organizations like EveryoneOn, Boys & Girls Club, College Board, Common Sense Media, Best Buy, and GitHub are providing technical training, digital literacy and college prep programs, and devices for newly connected families. From Rockford, Illinois, to Washington, DC, to Kansas City, Missouri, ConnectHome has spurred new innovations in public-private partnerships that are changing tens of thousands of lives. 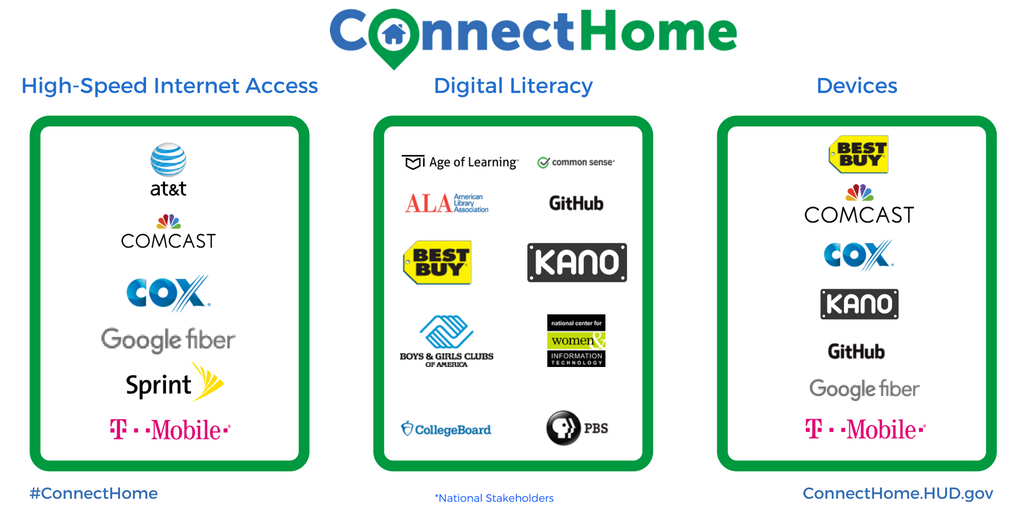 The federal government has an important role to play in closing the digital divide and creating opportunity for low-income families. Today’s announcement coincides with the completion of two new rules this week that will encourage — and in some cases require — public housing authorities to install high-speed internet infrastructure in new construction and significant rehabilitation projects. And to help communities do more to get kids connected and conduct digital literacy trainings, HUD and the Corporation for National and Community Service (CNCS) will deploy a cohort of AmeriCorps VISTA members to support the ConnectHome Initiative throughout the 28 pilot communities.

Last week, I had the opportunity to meet Hayden Stonebarger, a 14-year-old member of Choctaw Nation who was inspired by President Obama’s challenge. He’s a member of the Choctaw Nation Youth Advisory Board (YAB), an organization of students who strive to make a difference in their community. Through the YAB’s work on the local ConnectHome program, Hayden helps connect the elders of his community to the internet and shows them how to access vital resources like ordering their medicine online. These connections also help to bridge generations by empowering elders to share their life experiences and traditional culture with the students, while providing them a regular visit to look forward to. With help from ConnectHome, Choctaw Nation has been able to offer no-cost internet service and devices to all of its residents living in HUD-assisted housing.

As President Obama has said, programs like ConnectHome work because community leaders, nonprofits, and the private sector are all stepping up to do their part. Success will require everyone to be involved and engaged to ensure a bright future for our children. At HUD, we are proud to answer the President’s call to action to open the doors of opportunity to every American.