A Renewed Era of Federal-Tribal Relations

January 2, 2017 at 4:47 PM ET by Karen Diver, Special Assistant to the President for Native American Affairs in the White House Domestic Policy Council
Twitter Facebook Email
Summary:
Today the White House is releasing a report outlining some of the successes of this Administration while working on behalf of Tribes.

The Obama Administration has made historic progress over the past eight years in improving the nation-to-nation relationship between the United States and federally recognized Tribes. Together, the Obama Administration and Tribal Nations have accomplished shared goals and achieved milestones that upheld self-governance and self-determination – the foundation for prosperous and resilient tribal nations.

Today, the White House is releasing a report outlining some of the successes of this Administration while working on behalf of Tribes. The report sets a baseline of progress for Tribal Nations to reference in their ongoing work with the federal government, and outlines the priorities that the White House Council on Native American Affairs (WHCNAA) will continue to work on based on Tribal leaders’ recommendations. 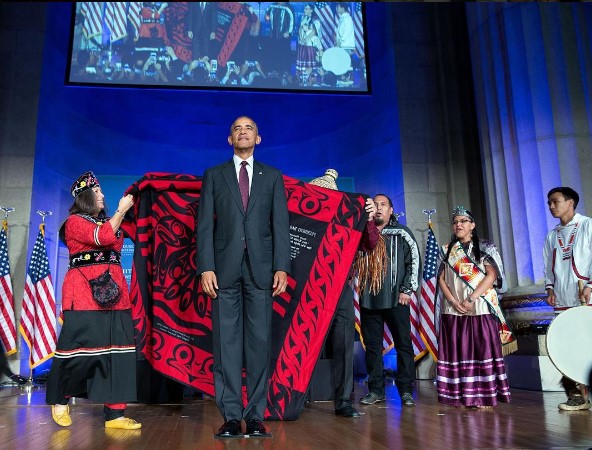 President Barack Obama being honored with a blanket ceremony and song during the 8th White House Tribal Nations Conference in Washington, D.C., September 29, 2016.

While the Administration and Tribes have partnered for historic achievements, there is still much more to do. President Obama signed Executive Order 13647 on June 26, 2013, establishing the WHCNAA, which represents a path to a more effective federal government for Indian Country, bringing together federal Departments and Agencies from across the Executive Branch to “break down siloes” and coordinate for more effective programs.

As demonstrated over the past eight years, when Tribal Nations and the federal government work together in a true spirit of nation-to-nation cooperation, momentous progress can be achieved.