Climate Change is Costly; Serious Climate Policy is a Bargain

January 12, 2017 at 10:00 AM ET by Brian Deese, Jason Furman
Twitter Facebook Email
Summary:
As the climate changes, global economic output will fall, but most of those economic damages can be avoided with smart policy.

As the President wrote this week in the journal Science, the last eight years demonstrate that carbon emissions can decline while the economy is growing. This is in contrast to centuries old reality that increased economic output entailed increased carbon emissions. Emissions did, in fact, drop during the Great Recession. But due to trends in the energy system and policies pursued by President Obama, carbon pollution has continued to fall while our economy has recovered from that shock. From 2008-2015, U.S. CO2 emissions from the energy sector fell by 9.5 percent while the economy grew more than 10 percent. 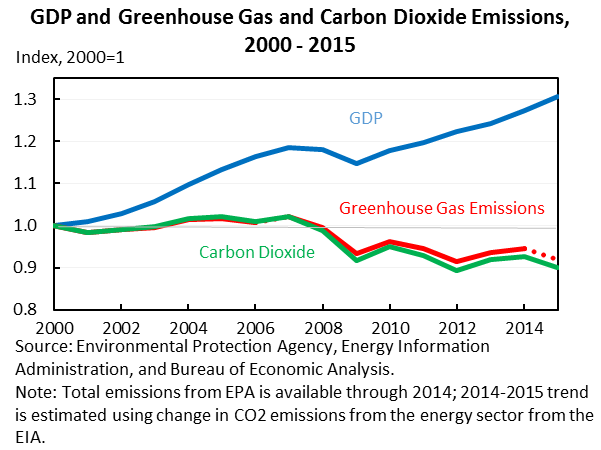 The decoupling of carbon pollution and economic growth in the United States is underway, and recent data from the International Energy Agency suggests that this trend is going global, as emissions have stayed flat in 2014 and 2015 while the global economy grew. When the Paris Agreement took effect in December 2015, the world took an important step toward avoiding the most dangerous impacts of climate change.  But Paris alone is not enough to avoid average global surface temperature increases that climate scientists say are very risky -- additional policies that reduce CO2 emissions are needed, in the United States and elsewhere, to ensure that these damages are avoided.

Moreover, as we consider the interaction of climate change mitigation policies and the economy, it is important to remember that the counterfactual to serious mitigation is not free – the absence (or even delay of effective climate policy can be very costly over time. The figure below graphs estimates of the annual economic damages from climate change, expressed as a fraction of global gross domestic product (GDP), from mid- to late-century, under different climate policy scenarios. We can think of this as a “climate damage cost” that world nations will pay each year as the climate changes, in terms of lost economic output. This cost includes impacts of increased temperature on agricultural productivity, sea level rise, and deaths and illnesses related to heat, pollution and tropical diseases. In the reference curve (in blue), no action is taken to address climate change. Each of the other curves incorporate different assumptions about how much emissions mitigation the world will achieve, and how quickly.  If countries meet their individual nationally-determined contributions (INDCs) agreed to in Paris and go no further, moving the world from the blue to the purple curve, we can avoid significant economic damages. To move to the red curve, countries must meet the Paris INDCs and continue to decarbonize beyond 2030 at about the same rate represented in the INDCs.  If we achieve net-zero global GHG emissions in 2080, we can reduce climate damage impacts on the level of global GDP from more than 4 percent to less than 1 percent by 2100. 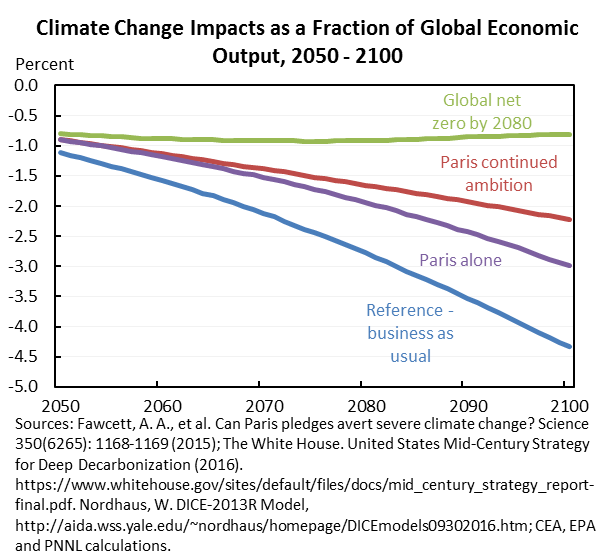 Failing to make investments in climate change mitigation could leave the global economy, and the U.S. economy, worse off in the future.  And the estimates graphed above are uncertain and may be conservative; they do not account for damages that are difficult to monetize (such as increases in the frequency and intensity of extreme weather), or for the possibility that we may cross critical greenhouse gas concentration thresholds that cause catastrophic damages (such as the melting of Greenland ice sheets and associated sea-level rise), or for the chance that climate change will reduce the rate of economic growth in some countries, rather than just the level of output.

We may have become used to reading about the predicted physical impacts of climate change, like inundated coasts and lower crop production. But the economic impacts, and their fiscal consequences, will be severe, as well.  For example, the U.S. Office of Management and Budget recently estimated that a reduction in annual global economic output of 4 percent—well within the range of what economic models suggest could happen by 2100 without further climate action—could translate to lost U.S. federal tax revenue of $340 to $690 billion per year (about 0.5 percent of expected U.S. GDP in 2100).

In deciding how much to reduce carbon pollution, and how quickly to act, countries must weigh the costs of policy action against estimates of avoided climate damages. But we should be clear-eyed about the fact that effective action is possible, and that the economic and fiscal costs of inaction are steep.