One of the toughest jobs I had in the Army was when I served as the logistics officer for an aviation battalion.  During my tenure, we participated in a training exercise at the Army’s Joint Readiness Training Center (JRTC) at Fort Polk, Louisiana.  It was a huge training event that lasted for three months.  The thing is, when you gear up for a demanding experience like that, the ability to plan ahead is vital.  In our case, we prepared for well over three years.  And that included advanced planning, thorough training of our Soldiers, and the acquisition of equipment in the years leading up to the exercise.  If we hadn’t had the ability to lay such detailed, intensive groundwork in advance, the operation likely wouldn’t have been successful. 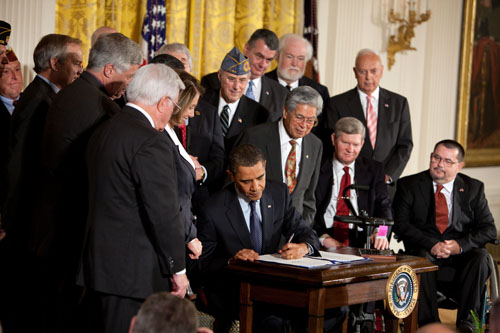 This is why, when President Obama signed the Veterans Health Care Budget Reform and Transparency Act into law today (also known as "advanced funding"), I was so pleased.  If multi-year planning was vital to a 300-Soldier battalion’s success at a training exercise, it is exponentially more critical to a Department like Veterans Affairs—which serves millions of our nation’s Veterans each day.  Until today, VA had not had the ability to plan its budget in advance—and a late budget meant that VA couldn’t effectively plan. But today, that has all changed.  While VA has consistently provided world class health care to our Veterans, having advanced appropriations will now allow us the ability to raise that care to an even higher standard.

As President Obama remarked, "In short, this is common-sense reform.  It promotes accountability at the VA.  It ensures oversight by Congress.  It is fiscally responsible by not adding a dime to the deficit.  And it ensures that Veterans' health care will no longer be held hostage to the annual budget battles in Washington."

So true.  Those of us in the Veterans' community, to include VA, Veterans Service Organizations and House and Senate Committee leaders, have long identified the need for advanced appropriations for VA.  In fact, President Obama recognized this during his tenure on the Senate Veterans Affairs Committee and it is a topic that he and I have discussed over the years.

So today, with the knowledge that VA’s budget will be passed a year in advance, we are better prepared to provide for our Veterans and their family members through the development of top-notch plans, services and programs to fit their needs.  This is a good day for the entire community.