"If the worst in American life lurked in [Selma's] dark streets, the best of American instincts arose passionately from across the nation to overcome it."

Half a century after the marches:

This past Saturday, the First Family traveled to Selma, Alabama to commemorate the 50th anniversary of the marches from Selma to Montgomery.

Learn about the history of the marches. Listen to the stories of those who marched. And tell us how you'll honor their legacy and #MarchOn.

If you missed the President's remarks at Saturday's event, make sure to watch below:

Before leaving Selma, the President and First Lady sat down to talk about the importance of Selma — and what it meant to bring their daughters with them. Watch:

Why did they march?

Fifty years ago, on March 7, 1965, hundreds of people gathered in Selma, Alabama to march to the capital city of Montgomery. They marched to ensure that African Americans could exercise their constitutional right to vote — even in the face of a segregationist system that wanted to make it impossible.

On the Edmund Pettus Bridge in Selma, state troopers and county members violently attacked the marchers, leaving many of them injured and bloodied — and some of them unconscious.

But the marchers didn't stop. Two days later, Dr. Martin Luther King led roughly 2,500 people back to the Pettus Bridge before turning the marchers around — obeying a court order that prevented them from making the full march.

The third march started on March 21, with protection from 1,000 military policemen and 2,000 Army troops. Thousands of people joined along the way to Montgomery, with roughly 25,000 people entering the capital on the final leg of the march. On March 25, the marchers made it to the entrance of the Alabama State Capitol building, with a petition for Gov. George Wallace.

Only a few months later, Congress passed the Voting Rights Act, which President Lyndon B. Johnson signed into law on August 6, 1965. The Voting Rights Act was designed to eliminate legal barriers at the state and local level that prevented African Americans from exercising their right to vote under the 15th Amendment — after nearly a century of unconstitutional discrimination.

Listen to stories from those who were there:

Last month, the President invited a number of people connected to the marches to attend a Black History Month reception here at the White House.

We talked with some of them about their experiences -- and their stories are nothing short of inspirational.

Listen as they talk about their experiences leading up to the marches:

Some of them also gave us their thoughts on the challenges facing today's generation:

And they explained what it meant to them to be invited to the White House:

How will you #MarchOn?

On August 6, 1965 — just a few months after the march — President Johnson signed the Voting Rights Act into law, to prohibit racial discrimination in voting. The act itself has been called the most effective piece of civil rights legislation ever passed by Congress.

But the work is far from done. Today's generation still faces a number of challenges, and we must be as committed to change today as we were then. 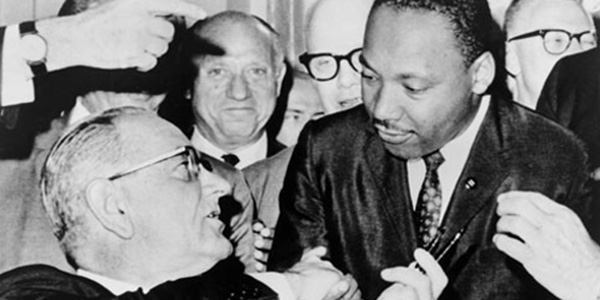