Building Trust Between our Communities and Institutions

On July 14, 2016, President Obama joined a town hall conversation on moving forward together after the tragic shootings across our country.

The President joined officers, parents, students, and families affected by the violence of recent weeks in a conversation on the challenges we face—from racial inequality to how we build trust in our communities.

Watch the conversation, then share your experiences and ideas on how we can all take steps together to build trust and ensure justice for all Americans.

This form is now closed. Thank you for your interest in the conversation.

“Faced with this violence, we wonder if the divides of race in America can ever be bridged. We wonder if an African-American community that feels unfairly targeted by police, and police departments that feel unfairly maligned for doing their jobs, can ever understand each other’s experience ... But, Dallas, I’m here to say we must reject such despair. I’m here to insist that we are not as divided as we seem.”

— President Obama at a memorial service for fallen officers in Dallas, Texas on July 12, 2016

In light of the recent events across the country, the President has renewed his call for communities across the country to identify ways to keep people safe, build community trust, and ensure justice for all Americans. The President is calling on law enforcement agencies, local governments, and advocates to take specific steps that will help communities across America move forward in rebuilding the public’s trust in our institutions.

Learn more about the Task Force on 21st Century Policing

Central to this effort is implementing the recommendations of the Task Force on 21st Century Policing, which President Obama established in December 2014 and charged with examining how to strengthen public trust and foster strong relationships between local law enforcement and the communities they protect, while also promoting effective crime reduction.

Over the coming months, communities across the country will be coming together to discuss these issues and take action in these and other ways. The White House hosted one such convening on July 13 to identify practical steps that all stakeholders can take.

From Print to Action: Steps We Can Take to Strengthen Community Policing

Five Things Local Governments Can Do

Local government officials should honor their commitment to safety and security for their constituents by being involved in every phase of design and implementation of the Task Force recommendations.

Five Things Law Enforcement Can Do

Law enforcement organizations have the opportunity to welcome in their communities, provide leadership, establish a climate of openness, and demonstrate a willingness to implement the Task Force recommendations.

Five Things Communities Can Do

Community policing is not just about the behavior and tactics of police. It is also about the civic engagement and capacity of communities – from faith-based and community organizations to employers and business partners – to improve their own neighborhoods, their quality of life, and their sense of safety and well-being.

Learn more about these recommendations in the Task Force Implementation Guide.

Success Stories from the Field 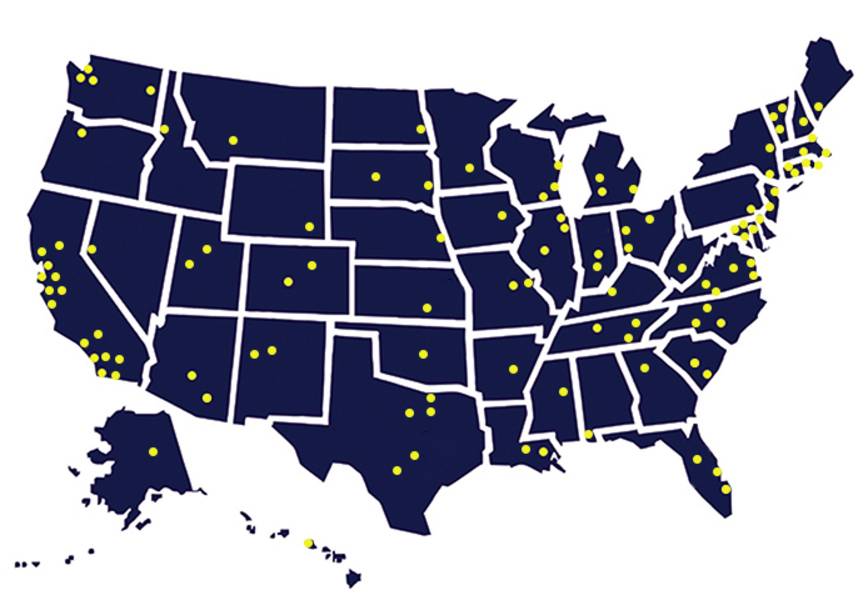 Since the President launched the 21st Century Policing Task Force, local elected officials, police departments, faith groups, youth groups, and others have come together to make real, noticeable progress in their communities.

Here are just a few examples of communities where local leaders are adopting the recommendations of the Task Force.

To view more examples and submit your own implementation success stories, visit the COPS office page.

"The City of Los Angeles has a long-standing commitment to the principles of community policing outlined in the 21st Century Policing Report, and is actively working on enhancing the LAPD's efforts in this area. This year, Mayor Garcetti unveiled the creation of a new LAPD Division entirely dedicated to community outreach, community policing, and social media engagement. The Department is also engaging in expansions of cutting-edge digital media technologies, including outfitting its officers with body cameras, and several programs dedicated to deepening relationships with LA's diverse communities while leveraging best practices in community policing, including its Gang Reduction and Youth Development and Domestic Abuse Response Team programs."

"After the issuance of the President’s Task Force on 21st Century Policing Interim Report and a list of recommendations from the Office of Community Oriented Policing Services, Mayor Michael Nutter formed a 24 member Police Community Oversight Board to implement both sets of recommendations. The Board, headed by the Dean of Temple University Law School, is charged with advancing efforts to create a more responsive, more ethical, and more service-oriented police department by materially implementing the recommendations in both reports. In addition, the Board is to assess the effects of the implemented recommendations on the actual and perceived relationship between the police department and the community. The Board will issue public reports twice yearly." 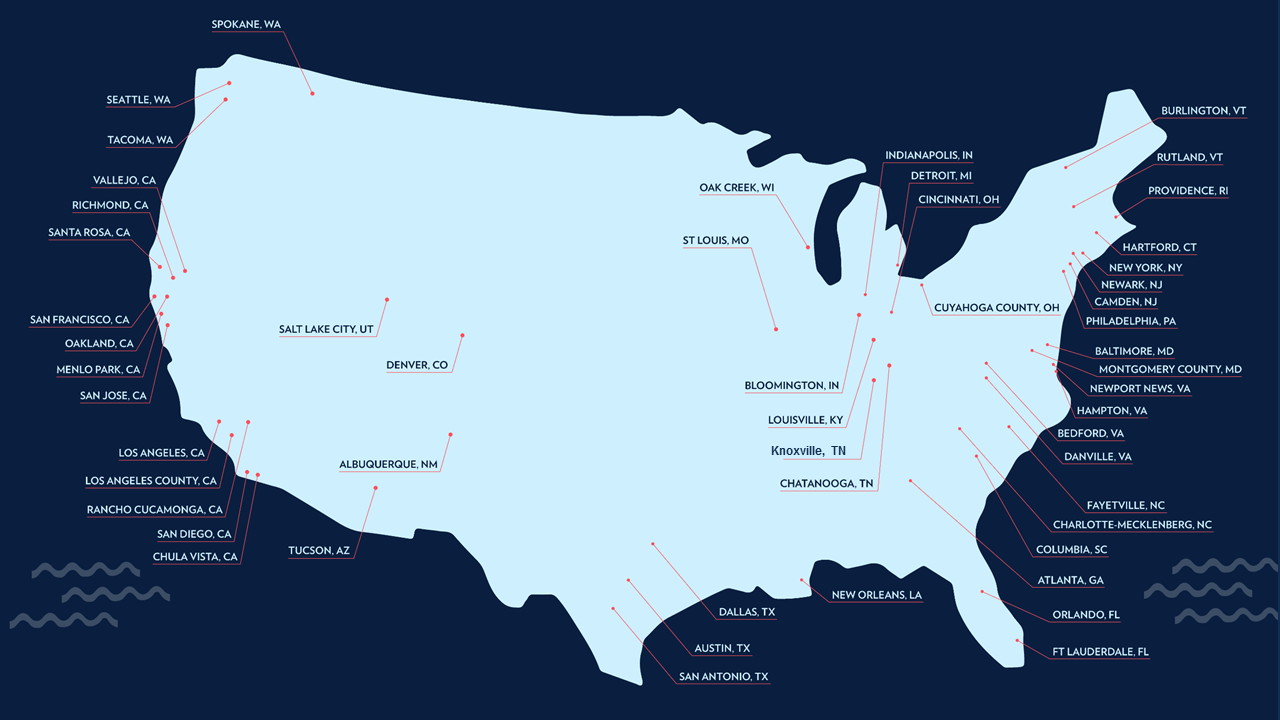 In response to several of the Task Force recommendations that speak to the importance of technology and transparency, in May 2015 the White House launched the Police Data Initiative (PDI). The PDI a community of practice that includes leading law enforcement agencies, technologists, and researchers committed to improving the relationship between citizens and police through uses of data that increase transparency, build community trust, and strengthen accountability.

When the President officially launched the Police Data Initiative in Camden, NJ in May 2015, 21 law enforcement agencies were committed to the community of practice and were working toward increased transparency.

Today, an additional 32 jurisdictions have committed to join the Police Data Initiative, bringing the total number to 57. These jurisdictions, from all across the nation, cover 40 million people, and include three of the five largest police departments.

Police chiefs across the country have begun to see this work of building trust through transparency as critical to their day-to-day operations. Here are the Chiefs in their own words:

"The Chattanooga Police Department is excited to be participating in the Police Data Initiative. It provides us an opportunity to have an open and honest conversation with the communities we police about our efforts and helps to foster the trust needed for our community and problem-oriented policing efforts."

Learn more about the latest on the Police Data Initiative: 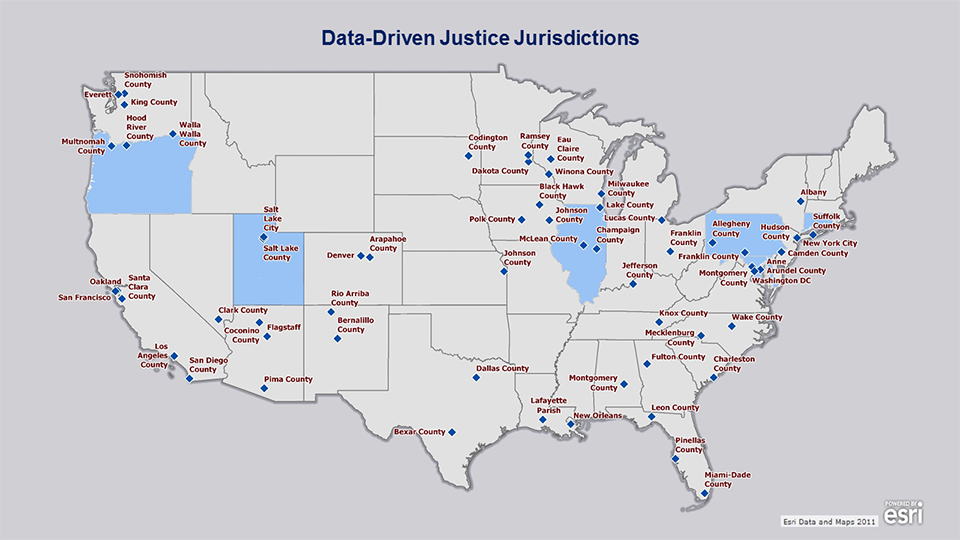 Communities across the country have recognized that a relatively small number of these highly-vulnerable people cycle repeatedly not just through local jails, but also hospital emergency rooms, shelters, and other public systems, receiving fragmented and uncoordinated care at great cost to American taxpayers, with poor outcomes.

In June 2016, the Administration launched the Data Driven Justice Initiative with a bipartisan coalition of 67 city, county, and state governments who have committed to using data-driven strategies to divert low-level offenders with mental illness out of the criminal justice system and change approaches to pre-trial incarceration, so that low-risk offenders no longer stay in jail simply because they cannot afford a bond. With an estimated 7 to 10 percent of all calls for service involving people with mental illness, de-escalation training and Crisis Intervention Training (CIT), is a core component of DDJ. Several DDJ communities have worked with faith leaders, community organizations, and mental health advocates to develop and implement low-cost CIT trainings and have seen promising results in reductions of use of force and increased diversions to community-based treatment.

These innovative strategies, which have measurably reduced jail populations in several communities, help stabilize individuals and families, better serve communities, and often save money in the process.

The Task Force on 21st Century Policing: Building Trust between our Communities and Police

The Task Force conducted public listening sessions across the country, received testimony from more than 100 witnesses representing a wide range of law enforcement officials, civil rights advocates, community and faith leaders, academics, and others, and considered hundreds of written submissions. Since the Task Force’s final report was released in May 2015, it has become a foundational document serving as an anchor for an ongoing national discussion on policing reform. Major law enforcement and civic organizations have undertaken leadership roles in bringing the Task Force report’s key findings to the attention of their hundreds of thousands of members, featuring the report at training sessions and annual conferences. Additionally, more than 30 state and territorial peace officer standards and training (POST) commissions are reviewing their training curricula based on the Task Force report and have started making changes.

Following the release of the Task Force report, the White House and the Department of Justice’s Office of Community Oriented Policing Services (COPS) convened the first of many forums of elected officials, police executives, and community members to jointly discuss the Task Force recommendations and share strategies for implementation. In May of this year, the COPS office issued a report highlighting progress in the first year since the Task Force issued its recommendations.

Read the final report of the Task Force here.