Over 70% of Americans Misusing Painkillers Obtain them from Friends or Relatives; White House Drug Policy Director Urges Americans to Help Save Lives by Taking Advantage of Upcoming National Take Back Day to Dispose of Unused, Excess, or Expired Medications in Homes

(Washington, D.C.) -  Today, the Office of National Drug Control Policy (ONDCP) released a new analysis of data from the 2009 and 2010 National Survey on Drug Use and Health (NSDUH) revealing that the majority of new or occasional nonmedical users of pain relievers obtained the drug from family or friends for free or took them without asking.  In contrast, frequent or chronic users (those who used pain relievers non-medically once a week or more on average in the past year) were more likely to obtain the drug from doctors or by buying them than were less frequent users.

“These data confirm that properly disposing of expired or unneeded medications is one of the most important actions Americans can take to address our Nation’s prescription drug abuse epidemic,” said Gil Kerlikowske, Director of National Drug Control Policy. “We will continue our unprecedented and comprehensive efforts to address this threat, but at the end of the day, our strongest tool is vigilance among everyone with access to a medicine cabinet.” 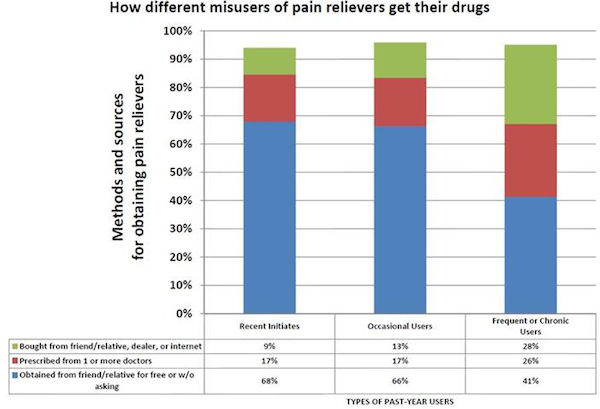 “Millions of Americans suffering from acute and chronic pain need access to prescription opioids, but it is equally important that people know how to use and dispose of these powerful medicines responsibly and appropriately." said FDA Commissioner Margaret A. Hamburg, M.D.

To help Americans address this threat, the Drug Enforcement Administrationwill host its fourth National Take Back Dayon Saturday, April 28th, at over 5,000 collection sites across the United States.  Last October, Americans disposed of 377,080 pounds—188.5 tons—of prescription drugs at over 5,300 sites operated by the DEA and nearly 4,000 state and local law enforcement partners.  In its three previous Take Back events, DEA and its partners took in almost a million pounds—nearly 500 tons—of pills.

“Every American has a role to play in the fight against prescription drug abuse,” says DEA Administrator Michele M. Leonhart.  “One step we can all take is to become more knowledgeable -- and to educate our children-- about the dangers and warning signs of abuse.  Another is to remove hazards that contribute to addiction, and that starts at home with the disposal of unused, unwanted or expired prescription drugs.  Millions of Americans will become a part of the solution when they participate in DEA’s National Prescription Drug Take-Back Day on April 28.”

“Drug overdose deaths have increased dramatically over the last decade and the primary driver of the increase has been deaths due to prescription drugs, especially prescription opioid painkillers,” said Dr. Ileana Arias, Principal Deputy Director of the Centers for Disease Control and Prevention.  “It is essential that federal and state governments, health care providers and insurers, communities and individuals work collectively to address the abuse of prescription drugs.”

One year ago, the Administration released Epidemic: Responding to America's Prescription Drug Abuse Crisis, a national framework for reducing prescription drug diversion and abuse by supporting the expansion of state-based prescription drug monitoring programs, recommending more convenient and environmentally responsible disposal methods to remove unused medications from the home, supporting education for patients and healthcare providers, and reducing the prevalence of pill mills and doctor shopping through enforcement efforts.

Visit www.DEA.gov to find a location taking back medications near you on Saturday, April 28th

The FDA also provides guidelines on how consumers can properly dispose of unused medicines on their own here.

For more information on National efforts to reduce drug use and its consequences visit: obamawhitehouse.archives.gov/ONDCP