WASHINGTON – According to new data from the Substance Abuse and Mental Health Services Administration’s (SAMHSA) Drug Abuse Warning Network (DAWN), visits by individuals to hospital emergency rooms involving the misuse or abuse of pharmaceutical drugs have doubled over the past five years and, for the third year in a row, exceed the number of visits involving illicit drugs.

According to DAWN, which provides national estimates on individuals who experience drug-related medical emergencies that are severe enough to require treatment in an emergency department, there were approximately 1.2 million visits by individuals to hospital emergency rooms involving pharmaceutical drugs in 2009. This compares to about 974,000 visits involving illicit drugs in 2009.

“Prescription drug abuse is our Nation’s fastest-growing drug problem, with shocking consequences measured by overdose deaths, emergency room visits, treatment admissions, and increases in youth drug use, said Gil Kerlikowske, Director of National Drug Control Policy. “The Obama Administration is mounting an unprecedented effort to address this public health epidemic, and as we coordinate a national response to reduce drug use and its consequences, we need communities to be our partners in this effort. Parents should act today to protect young people by talking to their kids about the consequences of drug use, even legal drugs such as prescription drugs, and by properly disposing of unused, expired, or unneeded medications found at home.”

The Obama Administration is mounting an unprecedented government-wide effort to combat prescription drug abuse. These efforts include: 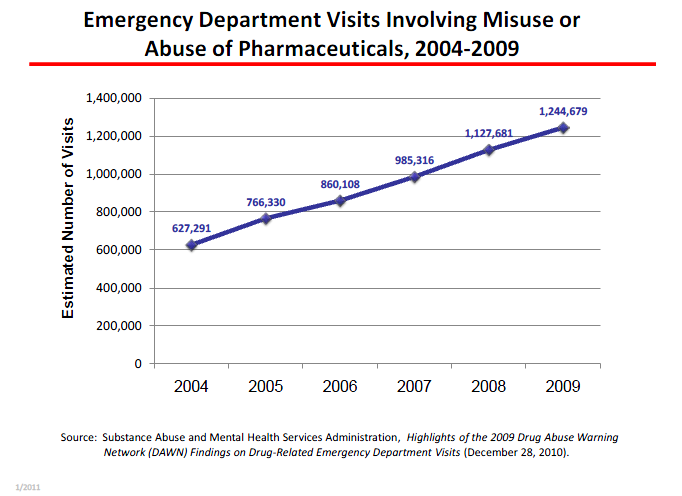 DAWN data are based on a national sample of general, non-Federal hospitals operating 24-hour emergency departments. In each participating hospital, emergency department medical records are reviewed retrospectively to determine visits that involved recent drug use. All types of drugs—illegal drugs, prescription and over-the-counter pharmaceuticals, and non-pharmaceutical inhalants—are included.

For more information on how to properly dispose of prescription drugs click here.