(Washington, D.C.) – Today, Gil Kerlikowske, Director of National Drug Control Policy (ONDCP) released the 2011 Arrestee Drug Abuse Monitoring Annual Report (ADAM II).  The 2011 report reveals that in the 10 participating cities/counties, more than half of adult males arrested for crimes ranging from misdemeanors to felonies tested positive for at least one drug.  Positive test results ranged from 64 percent in Atlanta, GA to 81 percent in Sacramento, CA, illustrating the link between drug use and crime and highlighting the importance of Obama Administration drug policies designed to break the cycle of drug use, arrest, incarceration, release, and re-arrest.

Some other key findings from the report:

“These data confirm that we must address our drug problem as a public health issue, not just a criminal justice issue,” said Director Kerlikowske. “Decades of research and experience show us crime and drug use are linked, and too often underlying substance use disorders are the driving force of criminal activity taking place in our communities. While the criminal justice system will always serve a vital role in protecting public safety, we cannot simply arrest our way out of the drug problem,” he continued, “instead, we must also support evidenced-based programs and policies that work to break the vicious cycle of drug use and crime, reduce recidivism, and make our communities healthier and safer.”

ADAM II is a unique Federal data collection program that shows drug use patterns among arrestees. In each of the ten U.S. counties included in the program, data are collected from adult male arrestees, through voluntary interviews and drug tests, within 48 hours of arrest.  The sample is drawn from all adult males arrested, not just those arrested on drug charges.  Tests are conducted to detect the presence of the following drugs: marijuana, cocaine, opiates, amphetamines/methamphetamine, Darvon, PCP, benzodiazepines, methadone, and barbiturates. ADAM II does not test for alcohol.  The ten sites measured in the report are: Atlanta, GA; Charlotte, NC; Chicago, IL; Denver, CO; Indianapolis, IN; Minneapolis, MN; New York, NY; Portland, OR; Sacramento, CA; and Washington, D.C.

In April, the Obama Administration released the 2012 National Drug Control Strategy, the Obama Administration’s primary blueprint for drug policy in the United States.  The new Strategy provides a review of the progress we have made during the past 3 years and also looks ahead to continuing Federal efforts to reform, rebalance, and renew national drug control policy to address the public health and public safety challenges of the 21st century.  Specifically, the new Strategy is guided by three facts:  addiction is a disease that can be prevented and treated; people with substance use disorders can recover; and innovative new criminal justice reforms can stop the revolving door of drug use, crime, incarceration, release, and re-arrest.

Some key actions taken by the Administration:

Thanks largely to comprehensive efforts to address drug use at the local, state, Federal, and international levels, the rate of overall drug use in the United States has declined by roughly 30 percent since 1979. More recently, there has been a 40 percent reduction in the rate of current cocaine use and meth use has dropped by half.  To build on this progress and support the public health approach to drug control outlined in the Strategy, the Obama Administration has committed over $10 billion for drug education programs and support for expanding access to drug treatment for people suffering from substance use disorders in FY 2012. 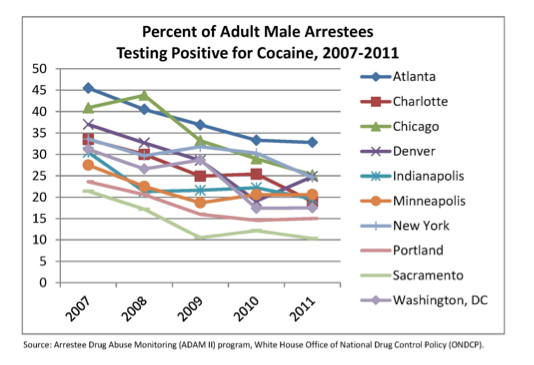