(Washington, D.C.) -  Today, Gil Kerlikowske, Director of National Drug Control Policy, released the 2012 National Drug Control Strategy, the Obama Administration’s primary blueprint for drug policy in the United States.  The new Strategy outlines 113 specific actions to be undertaken throughout the Federal government to reform U.S. drug policy through innovative and evidence-based public health and safety approaches aimed at reducing drug use and its consequences. Specifically, the new Strategy is guided by three facts:  addiction is a disease that can be treated; people with substance use disorders can recover; and innovative new criminal justice reforms can stop the revolving door of drug use, crime, incarceration, and rearrest.

“Outdated policies like the mass incarceration of nonviolent drug offenders are relics of the past that ignore the need for a balanced public health and safety approach to our drug problem,” said Kerlikowske. “The policy alternatives contained in our new Strategy support mainstream reforms based on the proven facts that drug addiction is a disease of the brain that can be prevented and treated and that we cannot simply arrest our way out of the drug problem.”

The President’s inaugural National Drug Control Strategy, published in 2010, charted a new direction in drug policy. The 2012 Strategy provides a review of progress made to date and outlinesprograms that work to significantly reform the criminal justice system by diverting non-violent drug offenders into treatment instead of incarceration, addressing substance use disorders through the healthcare system and youth outreach, targeting violent transnational criminal organizations, and expanding unprecedented Administration efforts to secure the Southwest border and strengthen international partnerships.

“Advances in neurosciences over the past decades have provided us with invaluable insight into our Nation’s drug problem,” said Stuart Gitlow, M.D., M.P.H., M.B.A., FAPA, Acting President of the American Society of Addiction Medicine.  “We are pleased the Obama Administration’s approach to drug control treats drug addiction as a chronic disease of the brain rather than a behavioral problem on the part of the individual.  We commend their efforts to put in place evidence-based public health solutions that will help bring those suffering from substance use disorders get the treatment they need to recover and lead healthy lives free from addiction.”

“Policing in the 21st Century means being tough - but smart- in how we address our Nation’s drug problem.” said Charles H. Ramsey, President of Major Cities Chiefs Association and President of the Police Executive Research Forum. “Drugs place too many of our communities at risk and we applaud Director Kerlikowske and the Obama Administration’s Strategy to improve public safety by implementing innovative programs that reduce the toll drugs take on our neighborhoods.  Those of us in law enforcement understand that too often drug addiction is the underlying cause of crime and enforcement working with our criminal justice system play a vital role in breaking the cycle of drug crime, incarceration, and rearrest.”

“We are pleased that the policies being released today will offer hope, work to help end discrimination facing people with addiction  and expand efforts to build recovery community organizations across the nation, benefitting the over  20 million Americans  in  long-term recovery, their families, friends and communities,” said Pat Taylor, Executive Director of Faces & Voices of Recovery.  “Recovery is a process that requires time, patience and support, and we look forward to continuing to work closely with the Obama Administration to implement public policies at the local, state, and Federal level to help individuals and families get the help they need.”

The new Strategy will build upon several important milestones already achieved in supporting evidence-based reforms to drug policy over the past three years:

Overall drug use in the United States has dropped substantially over the past thirty years. In response to comprehensive efforts to address drug use at the local, state, Federal, and international levels, the rate of Americans using illicit drugs has dropped by roughly one third since the late 70s. More recently, there has been a 40 percent drop in current cocaine use and meth use has dropped by half. To build on this progress and support a public health and safety approach to drug control outlined in the Strategy, the Obama Administration has requested over $10 billion to support drug education programs and support for expanding access to drug treatment for people suffering from substance use disorders.  The FY 2013 Budget also requests $9.4 billion for domestic law enforcement, $3.7 billion on interdiction, and $2 billion for international programs.

A full copy of the 2012 National Drug Control Strategy is available here.

Click here to see videos and read more about innovative alternatives to drug control supported by the Obama Administration. 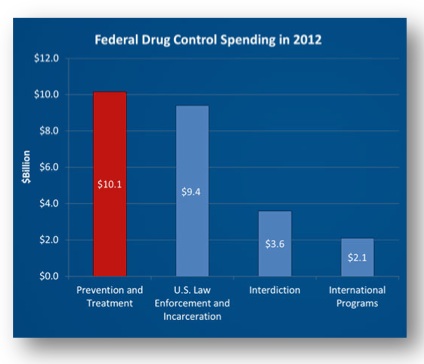 For more information on National efforts to reduce drug use and its consequences visit: obamawhitehouse.archives.gov/ONDCP