Washington, D.C. — Today, Gil Kerlikowske, Director of National Drug Control Policy, released updated data regarding disruptions in the U.S. market for cocaine and highlighted the Obama Administration’s renewed national effort to reduce the demand for cocaine in the United States.

According to new U.S. Government estimates conducted annually, Colombia is holding the line against coca cultivation after major decreases in 2007 and 2008. Between 2009 and 2010, the change in coca cultivation was not statistically significant. The potential production capacity for pure cocaine in Colombia increased slightly, from 290 metric tons in 2009 to 300 metric tons in 2010 (3%). Despite a slight increase between 2009 and 2010, there has been a sharp decrease in the amount of pure cocaine produced in Colombia over the past several years - from an estimated 700 metric tons potential cocaine production in 2001 to 300 metric tons in 2010 – a 57 percent drop. In 2010, Colombia sprayed 101,000 hectares and manually eradicated 44,775 hectares of coca, which is approximately 12 percent lower than the total number of hectares eradicated in 2009. (Cocaine in the United States is overwhelmingly sourced to Colombian production, which accounts for approximately 95 percent of the U.S. market. The primary sources of demand and destinations for cocaine from Peru and Bolivia appear to be Europe and other foreign markets.)

Unprecedented decreases in the U.S. availability of cocaine are occurring at the same time use of the drug in the U.S. is declining. Data from the 2009 National Survey on Drug Use and Health – the largest U.S. survey on drug use - show the number of Americans aged 12 and older who are current users of cocaine has dropped by 21 percent since 2007. In particular, there has also been an 18 percent decline in current use of cocaine among 18-25 year olds – the segment of the population with the highest rates of use – during the same period of time.

Other key figures point to significant disruptions in the domestic cocaine market:

Overall drug use in the United States has dropped substantially over the past thirty years. In response to comprehensive efforts to address drug use at the local, state, Federal, and international levels, the rate of Americans using illicit drugs today is roughly half what it was in the late 70s. To build on this progress, the Office of National Drug Control Policy (ONDCP) is coordinating an unprecedented government-wide public health approach to reduce drug use and its consequences in the United States. This effort includes increasing support for drug prevention and treatment programs, placing a heavier emphasis on early intervention programs in health settings, aligning criminal justice policies and public health systems to divert non-violent drug offenders into treatment instead of jail, funding scientific research on drug use, and expanding access to substance abuse treatment. ONDCP has also revamped the National Youth Anti-Drug Media Campaign to include a broader focus on substances most often abused by teens, including prescription drugs, marijuana, and alcohol, and partnering with communities to reach at-risk youth populations in rural, suburban, and urban communities.

Below is a comparison of the Colombia potential production trends with various domestic cocaine indicators: 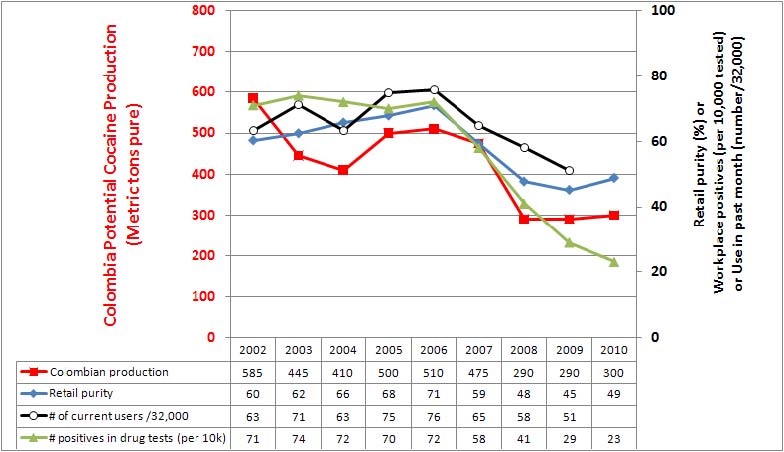