“Of course, nothing helps families make ends meet like higher wages…and to everyone in this Congress who still refuses to raise the minimum wage, I say this: If you truly believe you could work full-time and support a family on less than $15,000 a year, go try it. If not, vote to give millions of the hardest-working people in America a raise.” –President Obama, State of the Union address, Jan. 20, 2015

Since the President’s call to action in 2013, 18 states and Washington, D.C. have passed laws to raise their minimum wage-- benefiting millions of American workers.

Cities and counties are also taking action. Since 2013, about 50 cities and localities have risen to the challenge — including Lexington, KY; Santa Fe County, NM; and Oakland, CA — and the drumbeat continues, with more states and localities considering ballot initiatives and legislation. At the same time, businesses large and small are raising wages on their own, recognizing the value of higher wages to boost morale and productivity.

At the federal level, the Obama Administration has expressed support for the Raise the Wage Act proposed by Senator Murray and Representative Scott, which would increase the minimum wage to $12 by 2020. The President has also taken action to raise wages for workers on all new federal contracts to $10.10 or higher. Raising the minimum wage nationwide will increase earnings for millions of workers, and support the local economies where they live, work and spend their earnings.

Today, the real value of the minimum wage is about 20 percent less than when Reagan took office. Workers that receive tips have an even lower minimum wage: $2.13 per hour, unchanged for over 25 years.

On average, a full-time minimum wage worker makes $14,500 a year, which leaves too many families struggling to make ends meet. A family of 3 living off of minimum wage is well below the poverty level (see graphic, below).

When you ask, “Who are the workers that earn minimum wage?” the answer may not be what you expect.

Stay tuned for stories of minimum wage across the country—and if you have a story to share, feel free to Tweet with the hashtag, #MyStory #RaisetheWage. 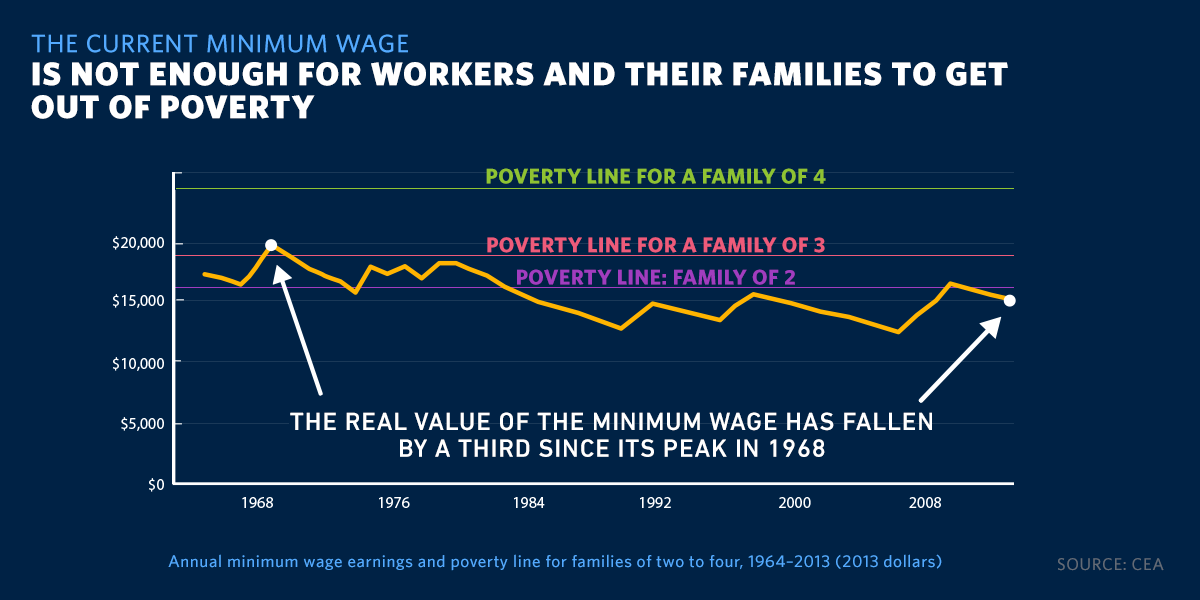 Raising the minimum wage will help millions of Americans. Ready to #RaiseTheWage?