June 8, 2010 at 3:16 PM ET by Jesse Lee
Twitter Facebook Email
Summary:
The President spends an hour talking with seniors across the country about how the new benefits coming into effect will help them and putting their concerns to rest.
[[nid:13064]]

Watch the full video above or jump directly to the following sections by clicking the links below (questions are paraphrased):

During the avalanche of misinformation last year from those opposed to reform of our health care system, there was no more persistent target than America’s seniors.   From the most outlandish claims about “death panels,” to the most personal but equally bogus claims about Medicare benefit cuts, the airwaves were filled with disingenuous talking heads and millions of dollars in deceptive ads stoking fear and confusion.

And so with the bill signed into law, and the talking heads having largely moved on to more current lines of attack, the President took some time today to talk with seniors across the country in a tele-town hall.  Much as the Vice President did back in September of 2009, the President assured them that their Medicare benefits were going to be safe and sound, and that they could keep their doctors – and myth of “death panels” seemed long-since dispelled.

But with the bill and all of its benefits beginning to come into effect, there was much new to discuss – as the President said in his opening remarks:

Case in point:  Beginning this week, tens of thousands of seniors who fall into the doughnut hole, like Fran, will receive a $250 rebate check to help you cover the cost of your prescriptions.  That will happen immediately -- that’s starting now.  (Applause.)  Each month -- and what’s going to happen is, each month, as more seniors hit the doughnut hole, more and more checks will hit the mail -– helping more than 4 million seniors by the end of this year.  Now, beginning next year, if you fall into the coverage gap, you’ll get a 50 percent discount on the brand-name medicine that you need -- 50 percent.  (Applause.)  And by 2020 -- it’s being phased in, but by 2020 this law will close the doughnut hole completely.  The doughnut hole will be gone.  It will be gone.  (Applause.)

Now, that’s not all.  Beginning next year, preventive care -– including annual wellness visits for Medicare beneficiaries, certain screening services like mammograms -– will be free, because the best way to prevent a serious illness is to diagnose it early.

This law also gives us the power to see to it that insurance companies don’t raise your rates just to pad their profits.  (Applause.)  Last week, Secretary Sebelius reminded insurance companies that we’ve got the authority to review and reject unreasonable rate increases for Medicare Advantage plans, and she put them on notice that we will exercise that authority.

Finally, because seniors are more frequently targeted by scam artists, we made sure the new law gives us stronger tools to target criminals.  And I want to send a notice to all who would swindle and steal from seniors and the Medicare system:  We are going to find you, we will prosecute you, and we will ultimately prevent those crimes from happening ever again.  (Applause.) 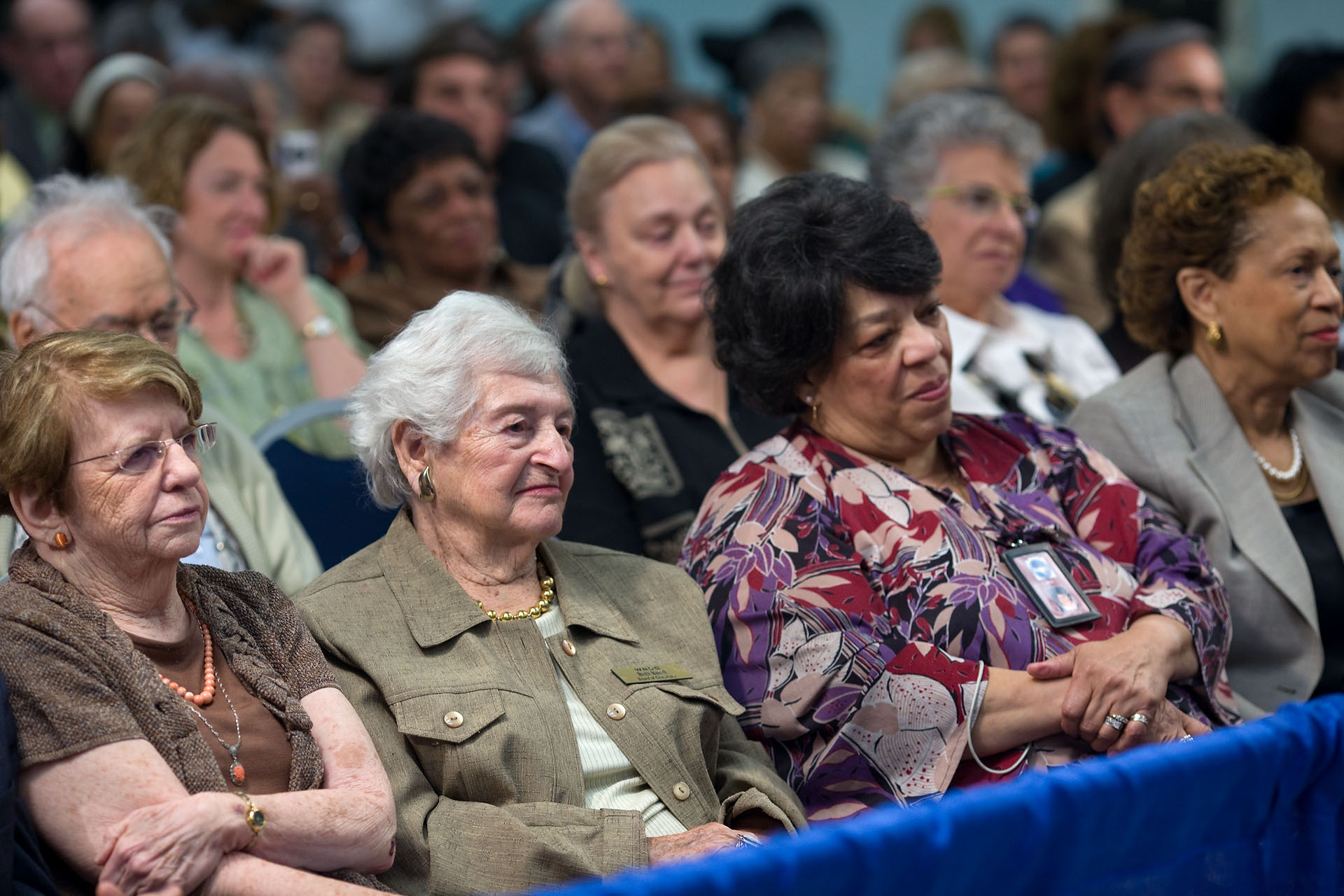 The President took a number of poignant questions, and took the time to answer as thoroughly as possible -- read any or all of them in the full transcript.  The most personal of all may have been an exchange about nursing homes and living independently:

THE PRESIDENT:  How are you?

Q    I’m a participant of (inaudible).  I would like to have you answer a question.

THE PRESIDENT:  I’m all ready.

Q    Okay.  For leading health care reform, I am concerned about how any health care changes will impact seniors and choice around alternatives to having to go live in a nursing home.  My friends and I want to live independently.

THE PRESIDENT:  Well, it is a great question, and let me just say you sound like a woman after my grandmother’s heart -- (laughter) -- because she -- some of you know my grandmother passed away a couple years ago.  She helped raise me, so I was very close to her.  And she lived in Hawaii, and after my grandfather passed away, she had the same little apartment she had had when I had been growing up over there.  And we kept on trying to say, you know, listen, why don’t you move to Chicago?  And she said, what am I, an idiot -- (laughter) -- that I am going to trade 80 degrees and trade winds for Chicago winter?

But she was always very proud and insistent.  And until the end of her life, she insisted on making sure that she could live in her apartment.  And there are all kinds of different options for different people.  The key is we want to give choice to seniors, what’s best for them.  Some people love living in a retirement facility.  Some people want to stay in their own house.  Some people want a mix of options and so if they can get some help that comes in, that may be the best option.

And what we try to do, not just in this law, but what we’re trying to do generally -- and I want Secretary Sebelius to fill in some of the specifics on this -- is to increase the number of options that are available for people and make sure that we are reimbursing through Medicare not just for the traditional choices of, if you’re in a nursing home, then you’re going to do it one way or another -- but are there other ways that people can get maybe a nurse who comes in, or maybe somebody who’s cleaning an apartment for -- once a week.  That’s what my grandmother did, for example.  And it made all the difference because she couldn’t always reach to some of the places -- Barbara is all nodding.  She can relate to that.  (Laughter.)

SECRETARY SEBELIUS:  Thank you, Mr. President.  I think there are a couple of -- let me just mention just a couple of specific things that are part of the new law.  One is there is a provision called the CLASS Act, which is going to allow workers in the current workforce to begin to voluntarily decide to have a payroll check-off and put aside some money that they can draw on later to provide the kind of residential care that I think is being talked about.  So if somebody needs to come to the house and help with lunch, or give a bath, or go to the grocery store, those kinds of features.  So you’d have your own savings account to be able to draw on that.  And that will be managed as part of the law and I think allow a lot of people to have more choices.

Just yesterday or the day before, under the Department of Aging, we released grants to the communities which are going to help governors like Governor O’Malley and his senior volunteer program get the word out to families about what their options are.  For a lot of people, particularly if something happens quickly, somebody suddenly gets much sicker than they were and needs help, a lot of families don’t know what their options are, don’t know if there’s anything other than a nursing home available.  And so part of choice is knowing what are -- what is here in Maryland, what’s around the country, what are those options.  So these will be counselors who will be able to meet with families, meet with family members and talk about where the options are.

There are also a whole series of medical strategies in the bill that provide for wrap-around care once a patient leaves a hospital, so a home health team, where somebody may need some follow-up.  They don’t really need to be in a full-time residential care, but they need somebody to follow up.  You know, did you fill your medicines?  Are you having any problems?  Did you -- are you experiencing any trouble?  So the bill also has a whole lot of features that I think will make the kind of choices much easier for people.

And finally the Caregiver Act, there is a program now, which is part of the overall President and Vice President’s move moving forward, which will provide for benefits for family members who are helping to provide for care services, because sometimes, in this tough budget time, it’s tough.  People are running out of money, and they think, I want to help my loved one stay at home, I want to provide the care, but I’m trying to raise kids and take care of an aging parent or aunt and uncle; I don’t have the resources, or I need a day off, or I need some help going to the grocery store.  So there is going to be some caregiver money, knowing that about 80 percent of long-term care services are really provided in communities by loved ones right now and they just need a little help.

So the system is going to get stronger to give those choices across the board.  And I think all of that is good news for Americans.