Brazil is an emerging global player and economic powerhouse.  With a 2010 GDP of more than $2 trillion, Brazil is the 7th largest economy in the world and accounts for nearly 60 percent of South America’s total GDP.  Brazil’s economy grew by 7.5 percent in 2010 and is anticipated to grow by between 4 and 5 percent in 2011.

As the U.S.-Brazil relationship deepens, we seek to base our cooperation on strong and dynamic private sectors, a commitment to open and fair trade, and continued economic and energy integration.  Strengthening the economic and commercial relationship between the U.S. and Brazil through stronger partnerships on energy (including clean energy, biofuels, and petroleum sectors), infrastructure and development cooperation in third countries will allow both countries to grow and at the same time strengthen the bonds between the U.S. and Latin America.

• Two-way trade between the United States and Brazil has doubled in the past decade to more than $80 billion in 2010, and investment and capital flows in both directions.  In the past five years, goods and services exports more than doubled, from $18.7 billion in 2004 to $38.8 billion in 2009.

• These exports were made up of goods from high-tech, value-producing industries. In 2010, the largest U.S. goods export category to Brazil was machinery, valued at $7.2 billion.  Other top export categories in 2010 included aircraft and parts ($4.4 billion), electric machinery ($4.3 billion), and organic chemicals ($2.0 billion).

• Exports to Brazil benefit businesses and entrepreneurs across the nation. In every year for the past 10 years, exporters in all 50 states and the District of Columbia have reported exports to Brazil.  In 2010, two-thirds of U.S. States (34 total) reported goods export shipments in excess of $100 million.

• Leading 15 Exporting States to Brazil (in millions of $USD) 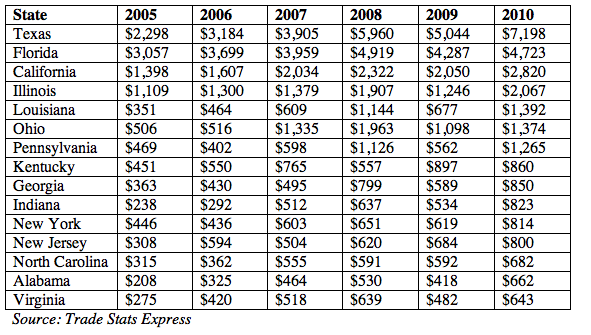 Winning the Future Through Investment

Businesses and workers in the U.S. and Brazil alike are reaping the benefits of a stronger economic relationship through trade and investment. Brazilian companies have opened factories in the U.S., creating American jobs. At the same time, American firms are exporting clean technology that supports green growth and serves millions of Brazilians.

• Brazilian firms have made substantial investments in the U.S. worth billions of dollars during the past decade. Between 2003 and 2010, 47 projects were announced with a total capital investment of $2.5 billion dollars. Completed, these projects could create 4,806 new jobs, in a cross-section of industries ranging from information technology to steel making.

Across the United States, small and large businesses are creating jobs through commerce with Brazil.  A few recent examples include:

• WindStream (New Albany, IN) closed a $10+ million deal with Wind Force Energia, a Brazilian Clean Tech distributor, for 30,000 wind turbine units.  WindStream will begin the delivery of these units at the end of this month and continue for the next three years.  The product will be used in Brazil in both on-grid and off-grid solutions for urban and rural applications.  This deal will result in 150 new jobs in Indiana.

• Capstone Turbine (Chatsworth, CA), a manufacturer of clean technology micro-turbine energy systems with 200 employees, recently completed work on a $2 million contract with Brazilian Fluxo Servicios de Petroleo for micro-turbine systems.  The turbines, manufactured in California, have been shipped to Copasa, Brazil where they produce clean energy from methane bio-gas as a wastewater treatment facility that serves millions of Brazilian residents.

• Rhino Assembly Corporation (Charlotte, NC), a small business with 19 employees, is a supplier and repairer of aerospace and automotive assembly tools.  While attending Trade Winds Forum Brazil in Sao Paolo last year, the company developed a relationship with ASA Brazil, a Brazilian tool and equipment distributor, which has resulted in over $615,000 in sales over the past 12 months and the hiring of new employees in North Carolina.

Partners in the Global Economic Community

The United States has worked continuously to deepen its ties with Brazil, and Brazil’s ties with the global economic community.

• The U.S. has successfully pushed for major emerging economies, such as Brazil, to  play a greater role in global economic affairs, and advocated strongly for the G-20 to become the premier forum for global economic and financial cooperation.

• The U.S. moved aggressively to enhance the role of critical emerging market countries such as Brazil in the governance of the IMF and World Bank.

• The United States and Brazil are cooperating on a number of projects ranging from technical assistance to other Latin American countries and Africa in areas such as food security, sustainable biofuels and clean energy development.