President Obama Announces Impact of October Refinancing Actions, Calls on Congress to Act on “To Do List”

Today, President Obama will travel to Reno, Nevada, where he will continue to push Congress to act on a “To Do List” he laid out earlier this week with initiatives that have bipartisan support and will create jobs and help restore middle class security.  While in Reno, the President will discuss the impact of refinancing changes he announced last October and meet with Val and Paul Keller, Reno homeowners who have since taken advantage of these changes. He will also highlight the next initiative on the “To Do List” which calls on Congress to cut the red tape so that responsible homeowners across the country who have been paying their mortgage on time can feel secure in their home and refinance at today’s lower rates.

1. Reward American Jobs, Eliminate Tax Incentives To Ship Jobs Overseas: Congress needs to attract and keep good jobs in the United States by passing legislation that gives companies a new 20 percent tax credit for the cost of moving their operations back to the U.S. and pay for it by eliminating tax incentives that allow companies to deduct the costs of moving their business abroad.

2. Cut Red Tape So Responsible Homeowners Can Refinance: Congress needs to pass legislation to cut red tape in the mortgage market so that responsible families who have been paying their mortgages on time can feel secure in their home by refinancing at today’s lower rates.

3. Invest in a New Hire Tax Credit For Small Businesses: Congress needs to invest in small businesses and jumpstart new hiring by passing legislation that gives a 10 percent income tax credit for firms that create new jobs or increase wages in 2012 and that extends 100 percent expensing in 2012 for all businesses.

4. Create Jobs By Investing In Affordable Clean Energy: Congress needs to help put America in control of its energy future by passing legislation that will extend the Production Tax Credit to support American jobs and manufacturing alongside an expansion of the 30 percent tax credit to investments in clean energy manufacturing (48C Advanced Energy Manufacturing Tax Credit)

5. Put Returning Veterans to Work Using Skills Developed in the Military: Congress needs to honor our commitment to returning veterans by passing legislation that creates a Veterans Job Corps to help Afghanistan and Iraq veterans get jobs as cops, firefighters, and serving their communities.

In 2009, the Administration announced the Home Affordable Refinance Program which was designed to help more responsible homeowners refinance their mortgages. In its first two years it helped nearly 1 million homeowners refinance and save thousands of dollars a year. Unfortunately, eligibility regulations and costs associated with the program kept it from having a wider impact.
That’s why, in October of 2011 the President announced, as part of his We Can’t Wait effort, that Fannie Mae or Freddie Mac (GSEs) and their regulator, the Federal Finance Housing Agency (FHFA), would work with lenders to remove barriers to allow more responsible families to benefit from refinancing their mortgages at historically low rates.  These were important changes, which made it possible for homeowners who had been locked out of the market because they didn’t have enough equity in their home, to refinance - so long as they have a loan backed by Fannie Mae or Freddie Mac, have not been late on their mortgage in the last six months, and have not made more than one late payment in the past year. The group that manages the program, the FHFA also waived a set of unnecessary costs and fees that were dissuading some from taking advantage of the program and worked to get rid of certain restrictions in order to increase competition among lenders.

Today, the President will announce that these changes have had a significant impact on responsible homeowners looking to refinance. Nationwide, refinancing applications have increased by 50% since the announcement in the fall.


• Much of this increase is driven by a spike in HARP participation. Roughly one in three borrowers applying for refinancing today is applying for a loan through HARP, up from less than one in ten a year ago. 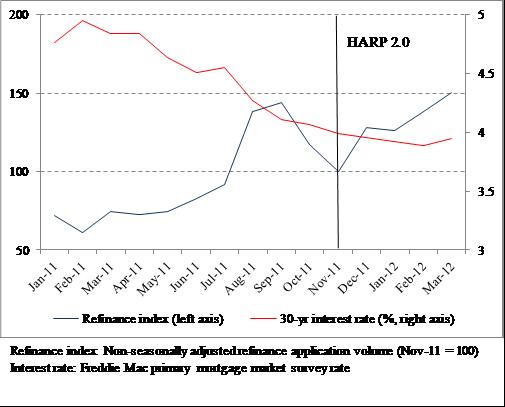 Refinancing Activity in States with Highest Share of Underwater Borrowers 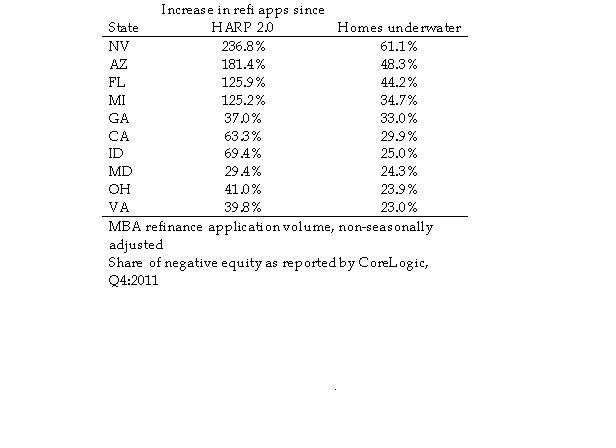 Today, the President will meet with Val and Paul Keller who live in Reno, Nevada and have personally benefitted from the refinancing changes the President announced in October. Val is an Operations Assistant for a lender that makes loans to farmers and ranchers and Paul is a retired Electrical Contractor who started a family business with their son. The Kellers have lived in their home in Reno for over 14 years. Their home is now worth $100,000, less than they paid for it back in 1998 and less than their $168,000 loan. Because they owe substantially more on their home than it is worth they have long been unable to refinance. But on October 24, 2011, Valerie was watching the President on TV and saw him announce that the Administration had worked with lenders to remove that barrier for responsible borrowers. Val and Paul realized that they were precisely the kind of borrower the President had intended to help - they were current on their mortgage with no late payment in the past six months, but nonetheless had been unable to get refinancing for years. Seeing this as an opportunity to finally get out from under their high interest rate Val called her lender. A few months later the Kellers were in a loan that reduced their monthly payments by $240.00 saving them money they are now using to pay down debt, including the principal on their home.

The Kellers story and today’s data make clear that the executive actions announced by the President last fall are having an outsized impact – bringing refinancing relief to tens of thousands of families across the country. However, there are still critical barriers that still stand in the way of the President’s goal that every responsible family that has been paying their mortgages on time should have an opportunity to save thousands of dollars by refinancing at today’s historically low interest rates. That is why the President is urging Congress as part of his “To-Do List” to take action to remove these remaining barriers.

The President’s plan for congressional action has three key components:

1. Remove the final barriers for borrowers with GSE insured loans: Common sense reforms that come at no cost to taxpayers and would apply to approximately 12 million borrowers, unlocking competition between banks for borrowers’ refinancing business and eliminating fees and appraisal costs. These steps will increase the number of families who can save on average $3000 a year by refinancing.

Cutting red tape: Some borrowers still need manual appraisals to determine if they are eligible for refinancing, which can take lots of time and cost up to $1,000. Under the President’s plan, the GSEs would be directed to expand their automated valuation processes, eliminating a significant barrier that will reduce cost and time for borrowers and lenders alike.

Increasing competition so borrowers get the best possible deal: Today, lenders looking to compete with the current servicer of a borrower’s loan for that borrower’s refinancing business continue to face barriers to participating in HARP. This lack of competition means higher prices and less favorable terms for the borrower. The President’s plan would extend the same streamlined underwriting currently enjoyed by the borrower’s existing lender to the rest of the market, leveling the playing field and unlocking competition between banks for borrowers’ business.

Extending streamlined refinancing for all GSE borrowers: The President’s plan would finally extend these steps to streamline refinancing for homeowners to all GSE borrowers. Those who have significant equity in their home – and thus present less credit risk – should benefit fully from all streamlining, including lower fees and fewer barriers. This will allow more borrowers to take advantage of a program that provides low-hassle, low-cost access to today’s low interest rates – and make it easier and more automatic for servicers to market and promote this program for all GSE borrowers.

2. Providing simple, low-cost refinancing opportunities for non-GSE borrowers: The President’s proposal would also extend access to streamlined refinancing for borrowers who’ve been paying their mortgages on time to those who currently do not have a loan backed by the GSEs to FHA.  This would be run through the FHA and open up today’s low rates to another 3-4 million families.

Example of how this works: A borrower has a non-GSE mortgage originated in 2005 with a 6 percent rate and an initial balance of $300,000 – resulting in monthly payments of about $1,800. The outstanding balance is now about $272,000 and the borrower’s home is now worth $225,000, leaving the borrower underwater (with a loan-to-value ratio of about 120%). Though the borrower has been paying his mortgage on time, he cannot refinance at today’s historically low rates. Under the President’s legislative plan, the borrower would be eligible to refinance into a 4.25% percent 30-year loan, which would reduce monthly payments by about $460 a month.

3. Giving Borrowers an Incentive to Rebuild Equity in their Homes: All underwater borrowers who decide to refinance will have a choice: they can take the benefit of the reduced interest rate in the form of lower monthly payments, or they can apply that savings to rebuilding equity in their homes. The latter course will give the majority of underwater borrowers the chance to get back above water in five years or less.

Covered closing costs: To encourage borrowers to make the decision to rebuild equity in their homes, we are proposing that legislation that would cover the closing costs of borrowers who chose this option – a benefit averaging about $3,000 per homeowner.

Example of how this works: A borrower has a 5.5 percent $216,000 30-year mortgage originated in early 2007. The loan now has an outstanding balance of $200,000, but the house is worth $167,000 (a loan-to-value ratio of 120%). The monthly payment on this mortgage is $1,228. While this homeowner is responsibly paying her monthly mortgage, she is locked out of refinancing. By refinancing into a 4.0 percent 20-year mortgage loan, this borrower keeps her monthly payments effectively the same. After five years her mortgage balance would decline to $165,000, bringing the homeowner above water.