“This year let's all come together, Congress, the White House, businesses from Wall Street to Main Street, to give every woman the opportunity she deserves, because I believe when women succeed, America succeeds.”

Today, President Obama will hold a roundtable discussion at Valencia College in Orlando, Florida with women to discuss his plan to expand economic opportunity for women and working families.  The President will discuss his efforts to expand access to higher education for women, and ensure that when women enter the workforce they have access to the skills they need to succeed and earn a fair and equal wage.

Today's event kicks off an initial five regional forums on women’s issues hosted by senior administration officials that will take place across the country this spring, leading up to the White House Summit on Working Families hosted by the President on June 23. These forums will take place in Denver on April 11; Chicago on April 28; San Francisco on May 5; Boston on May 19 and in New York City (date to be announced).

In addition to these regional forums, next week on March 26, the Small Business Administration and the National Women’s Business Council are hosting a roundtable, STEM for Her, that will bring together the private sector, academic experts and other stakeholders to identify actions that can encourage more women entrepreneurs in STEM fields to start and grow their businesses. The feedback we hear at all of these events will help inform the Summit and our efforts to build 21st century workplaces that meet the needs of a 21st century workforce. 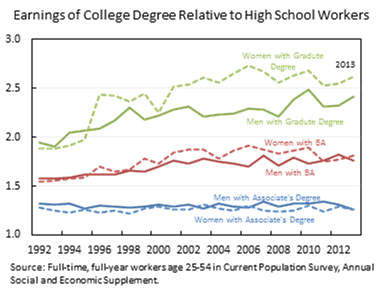 The Administration continues its commitment to strengthen support for women in postsecondary education.

Today, more than 11 million women are pursuing a postsecondary education and average graduation rates for women exceed their male counterparts (the college graduation rate for women at 2-year institutions is 34 percent compared to 27 percent for men).  However, women are disproportionately dependent on financial aid, and many enrolled women, especially those over the age of 25, are mothers, meaning they have additional considerations on their time and finances as they work to achieve their educational goals. 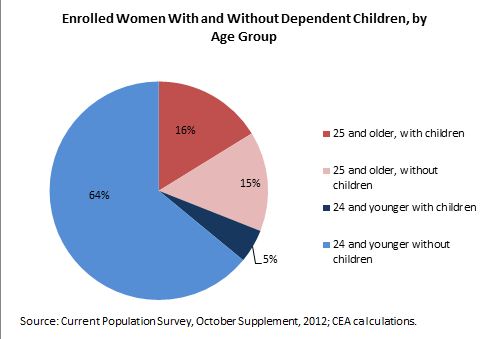 Key investments that support higher education access for women and girls include:

These investments have helped support large increases in the number of women pursuing a college degree.  Enrollments of women in 4 year schools are up over 20 percent since 2000, and enrollments in community colleges are up by 50 percent. 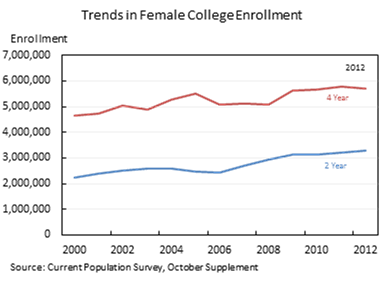 The Administration has also focused on ensuring that women have access to the skills they need to succeed in the workforce.

While the data shows young women outpacing men in obtaining college degrees, women continue to be underrepresented in critical areas of the economy like math, science, and technology related fields – areas that are projected to grow at faster rates than other job sectors and that present significant economic opportunities.  Though the number of women earning STEM degrees continues to rise, the share of degrees awarded to women relative to men stopped improving in the early 2000s. 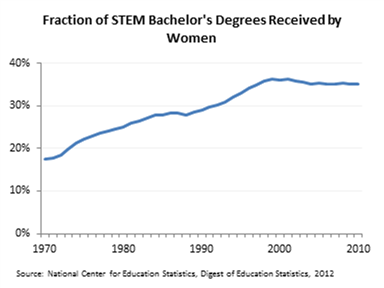 This is critical, because women in science, technology, engineering, and mathematics (STEM) fields make, on average, 33 percent more than women in non-STEM fields, and the gender pay gap is smaller in those occupations.  The Administration remains committed to ensuring that women and girls have every opportunity to be successful.  For example: