Economic Impact of the American Recovery and Reinvestment Act of 2009, Second Quarterly Report

This is the second quarterly report on the economic impact of the American Recovery and Reinvestment Act of 2009 prepared by the Council of Economic Advisers (CEA).  Because identifying the impact of macroeconomic policy is inherently difficult, we report the results from two CEA approaches and those of a number of respected analysts, including the non-partisan Congressional Budget Office. The CEA Report is available HERE. The key findings are:

1.  As of the end of the fourth quarter of 2009, $263 billion of the total $787 billion included in the Act, or about one-third of the total, has been outlayed or received as tax cuts.  If one includes spending that has been obligated but not yet outlayed, the fraction is over one-half.

2. The CEA estimates that the ARRA added between 3 and 4 percentage points to real GDP growth in 2009:Q3 and between 1½ and 3 percentage points in 2009:Q4.  It has raised the level of GDP as of 2009:Q4 by roughly 2 percent, relative to what it otherwise would have been.  As Table 7 shows, our estimates of the effect of the Act on GDP growth are broadly in line with independent and private estimates.

3. The CEA estimates that the ARRA has raised employment relative to what it otherwise would have been by between 1½ and 2 million jobs as of 2009:Q4.  Table 8 shows our estimates alongside those of other analysts.

4. We examine the direct recipient reporting data available for 2009:Q3.  These data indicate that about 640,000 jobs were saved or created by reporting recipients of ARRA funds as of the third quarter of 2009.  Because the recipient reporting data cover only a fraction of the funds expended to date and do not include any multiplier effects, this estimate suggests, if anything, a larger overall jobs impact than our comprehensive estimates show.

5. The report includes a detailed analysis of the clean energy programs supported by the ARRA. 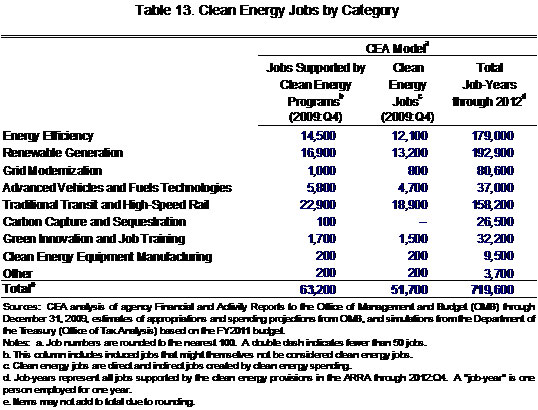