On the December Jobs Numbers

Today’s employment report, though a setback from November, is consistent with the gradual labor market stabilization we have been seeing over the last several months.

Revised data now show that employment increased 4,000 in November.  This is obviously welcome news and the first employment increase in 23 months.  Compared with the unexpectedly good report for November, December’s job loss is a slight setback.  Two industries where employment declined significantly were construction (-53,000) and wholesale and retail trade (-28,400).  One continuing sign of labor market healing was that temporary help services, which is often a leading indicator of labor demand, added 46,500 jobs in December.  Both the work week and aggregate hours remained stable, maintaining the significant improvement that occurred in November.

As the President has said for a year, the road to recovery will not be a straight line.  The monthly employment and unemployment numbers are volatile and subject to substantial revision.  Therefore, it is important not to read too much into any one monthly report, positive or negative.  It is essential that we continue our efforts to move in the right direction and replace job losses with robust job gains. 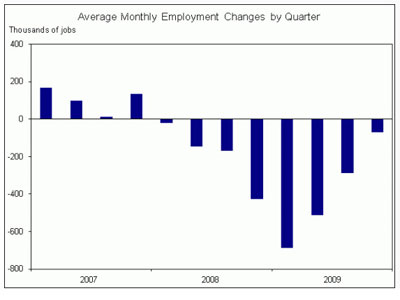