Our Response to the Zika Virus

The Zika virus is a disease spread primarily through the bite of an infected mosquito — the same type of mosquito that spreads other viruses like dengue and chikungunya.

While most people have no symptoms as all, Zika causes mild illness in some. However, the Centers for Disease Control and Prevention (CDC) has established a link between Zika infection during pregnancy and serious birth defects and other poor pregnancy outcomes. We also know that there can be other serious neurological impacts in some people who are infected with Zika.

We are closely tracking and responding to outbreaks of this virus across the Americas. We have seen transmission in Puerto Rico, the U.S. Virgin Islands, and American Samoa, in addition to cases reported in Mexico, Central and South America, the Caribbean, and the Pacific Islands. The Florida Department of Health is tracking cases of non-travel related Zika in one small area in South Florida and is closely coordinated with the CDC as they further investigate this ongoing situation.

And we know that this particular mosquito lives in certain parts of the southern United States, and we now know that Zika can also spread in another type of mosquito that is present throughout much of the United States. So now is the time to prepare as the seasons change and weather gets warmer.

As President Obama said, we all have to remain vigilant when it comes to combating the spread of diseases like Zika. That's why the President has called on Congress to provide emergency funding to combat this disease, including to:

Congress needs to act now to ensure that we have the resources we need to take every step necessary to protect the American people from the Zika virus.

The Zika Virus: What You Need to Know

Zika is primarily spread to people through the bite of infected Aedesmosquitoes. It can also be transmitted from a pregnant mother to her baby during pregnancy, and it can be sexually transmitted by a man to his partners. There is no evidence at this time that a woman can transmit the Zika virus to her sex partners.

Only about one in five people infected with the Zika virus will feel sick. In those that do, symptoms are usually mild and can include fever, rash, joint pain and red eye. Once a person is infected he or she is likely to be protected from future infections.

Currently, outbreaks of Zika are occurring in many countries and territories around the world, but especially in South America, Central America and the Caribbean. As the CDC notes, specific areas where the Zika virus is being transmitted are likely to change over time.

Right now, there is no vaccine to prevent this disease and no medicine to treat it. The best way to prevent infection by mosquitoes is to protect yourself from getting bitten by wearing long shirts and pants, using insect repellents, sleeping under mosquito nets, and more.

On February 22, we submitted a request to Congress for $1.9 billion in emergency funding to support the full range of activities needed to prevent, detect, and respond to the Zika virus and its serious associated health effects.

We have provided to Congress specific details about what we're requesting and how it would be spent. Here's a quick rundown on what the funding would support: 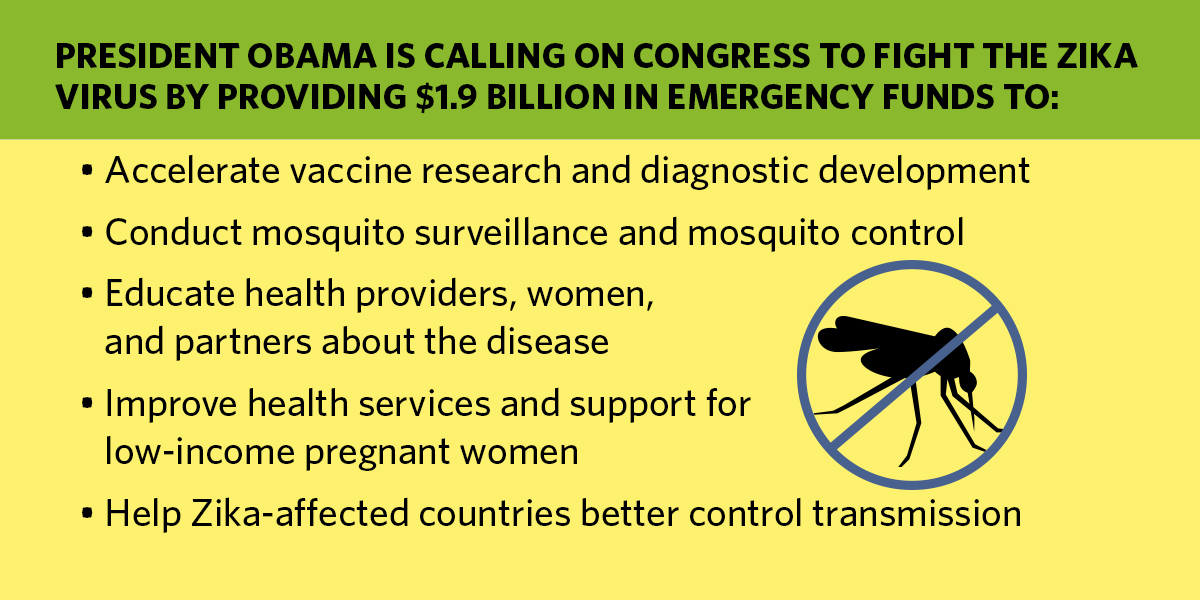 For months now, Congress has failed to act despite more than 45 open, public hearings and several briefings on this emergency. Some have suggested that Congress can wait until the fall to address Zika through the annual federal funding cycle. But mosquitoes don't breed based on a funding cycle and the Zika virus is an emergency that cannot wait. Congress must act now.

The CDC has laid out an estimated range of the mosquitoes that carry this disease in the United States this year. While this map is not meant to represent risk for spread of the Zika virus, it shows where people may come into contact with the kinds of mosquitoes that could be carrying this disease.

Recognizing the urgent need to prepare and respond to the Zika threat, the Administration identified and redirected close to $600 million in existing funds as a stopgap measure for initial, time-critical activities. However, it is not enough to address the Zika threat, or to fully implement necessary control measures. That is why Congress needs to pass the Administration’s full emergency funding request.

If Congress fails to act:

As it gets warmer, the reach of these mosquitoes will increase, and the need for a robust response will be more and more urgent. We have the opportunity to do get ahead of this epidemic, but Congress needs to do its part.

Do not display: Zika styles