Here's Why He Traveled to Alaska

President Obama traveled to Alaska to shine a spotlight on what Alaskans in particular have come to know: Climate change is one of the biggest threats we face, it is being driven by human activity, and it is disrupting Americans’ lives right now.

During the visit, the President shared his experience with people around the country first-hand. See highlights from the trip below.

Highlights from the Trip 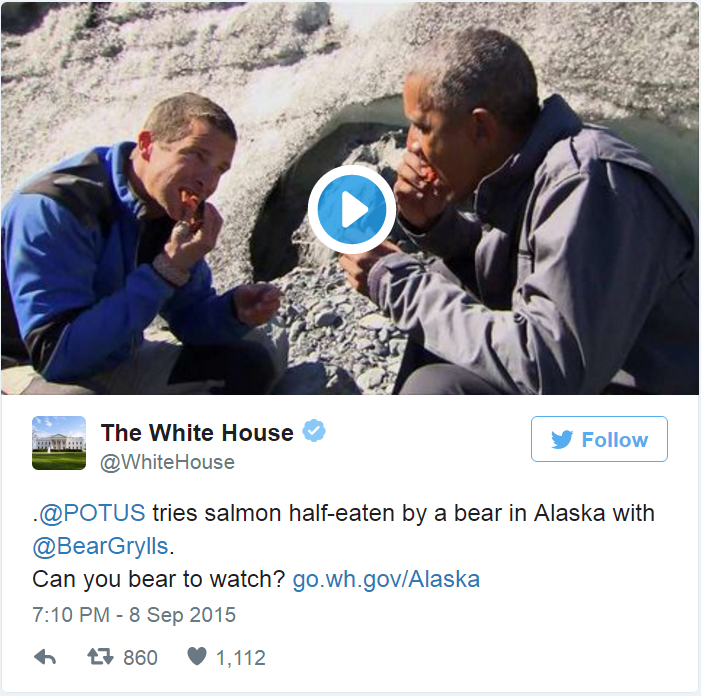 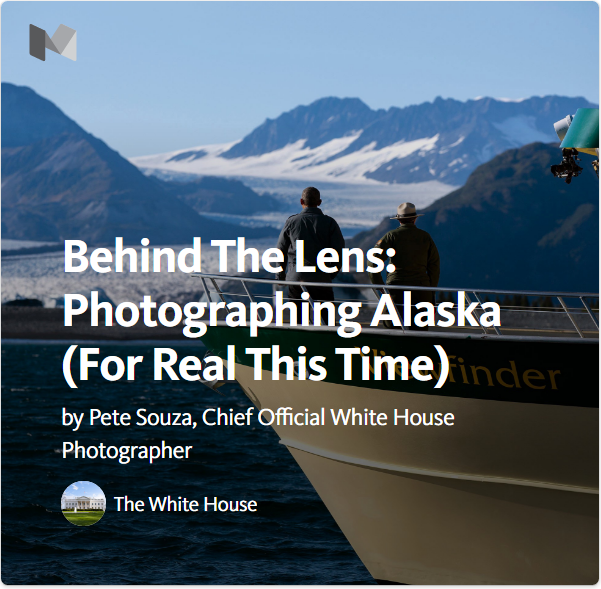 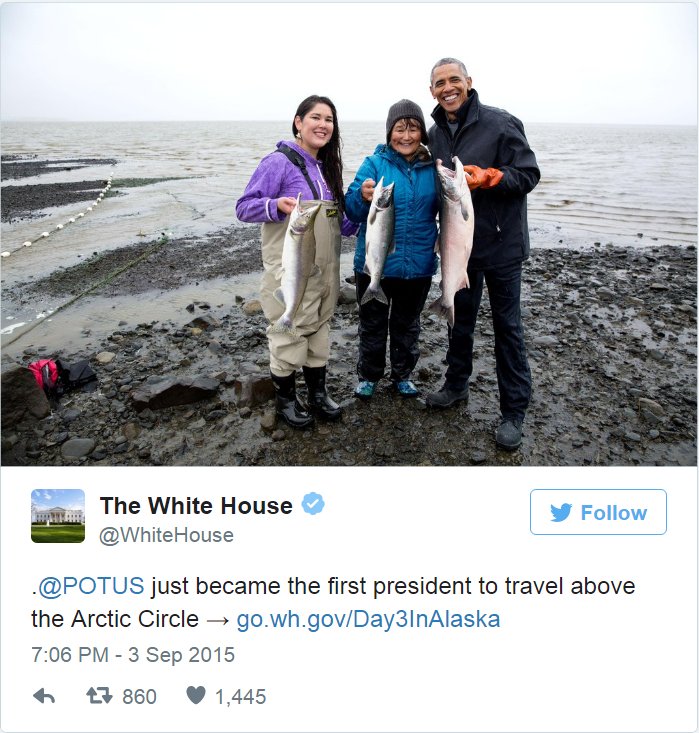 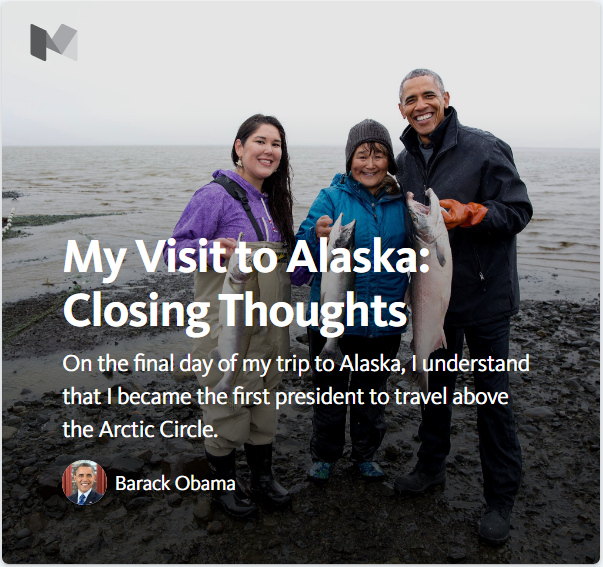 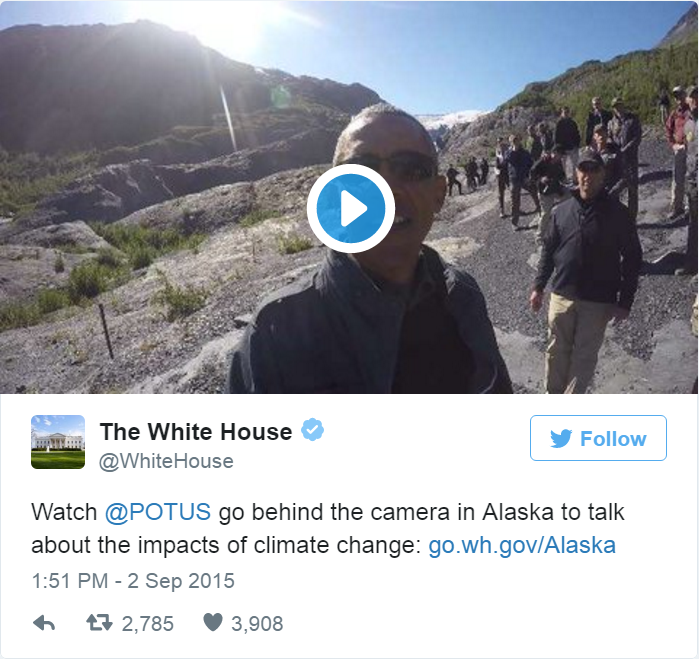 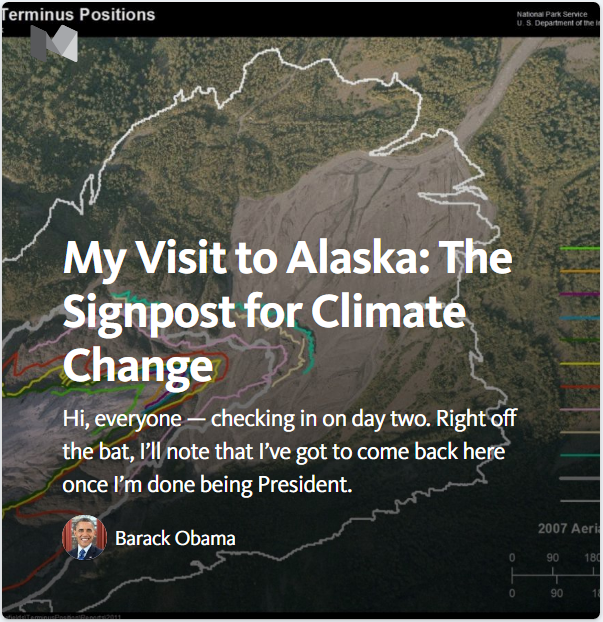 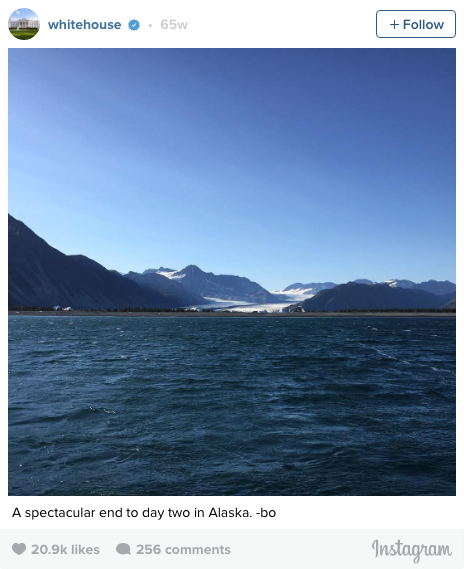 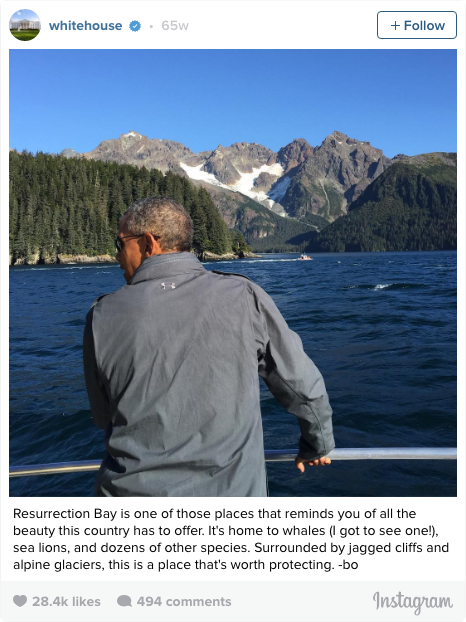 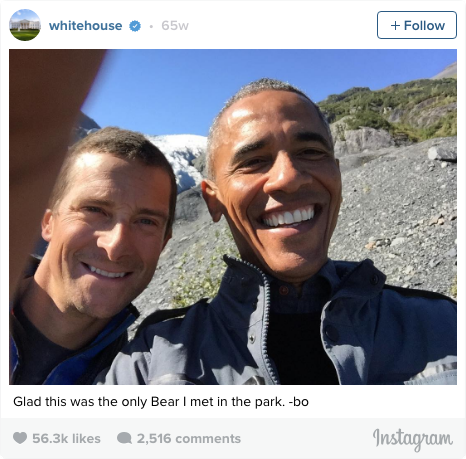 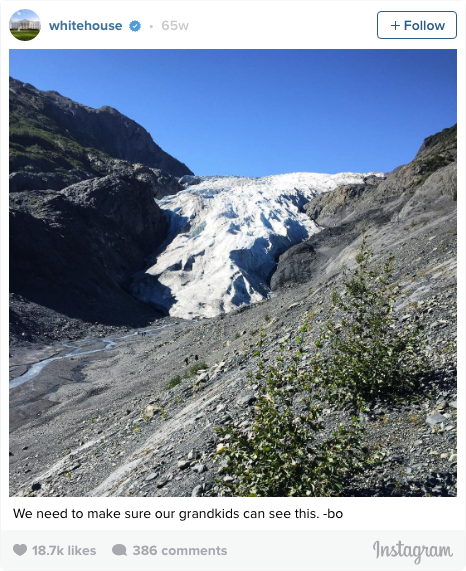 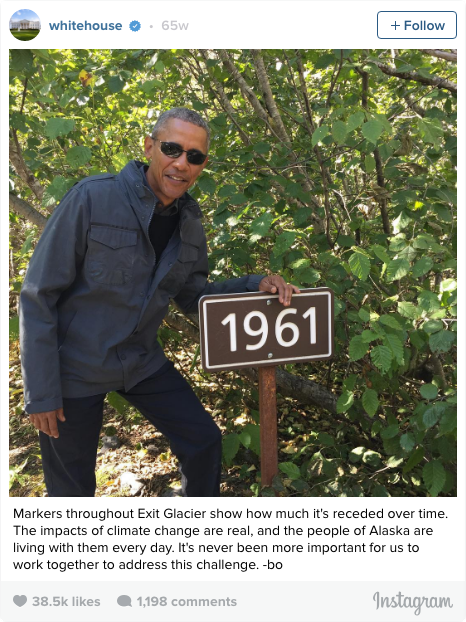 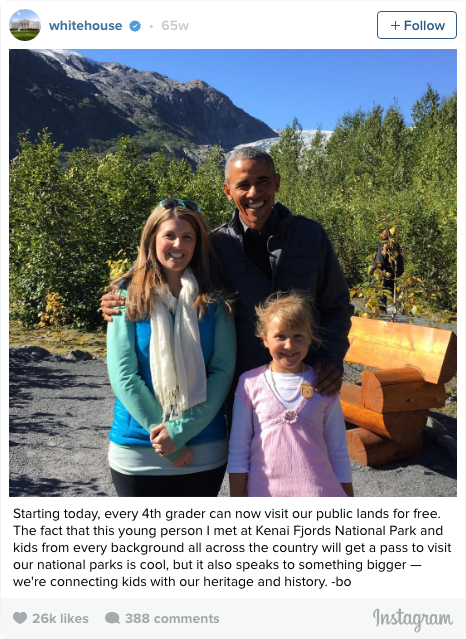 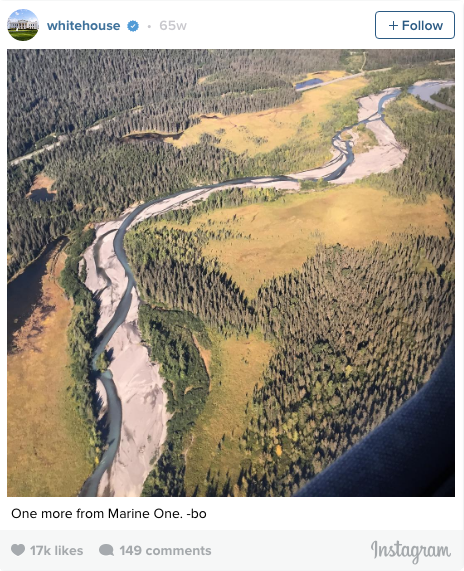 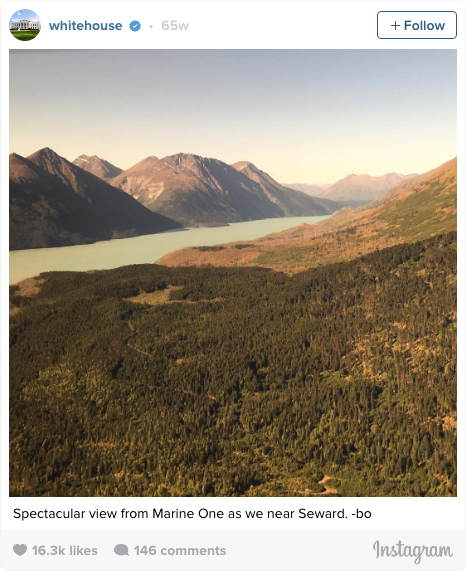 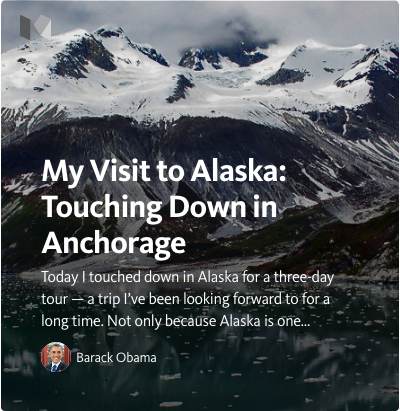 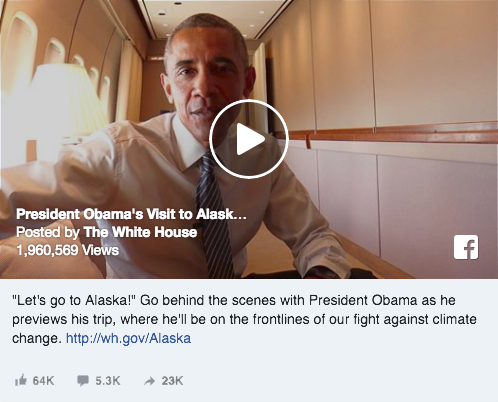 President Obama delivers remarks at the GLACIER Conference in Alaska. 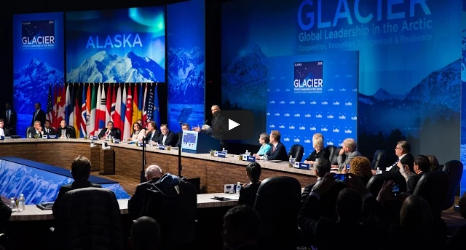 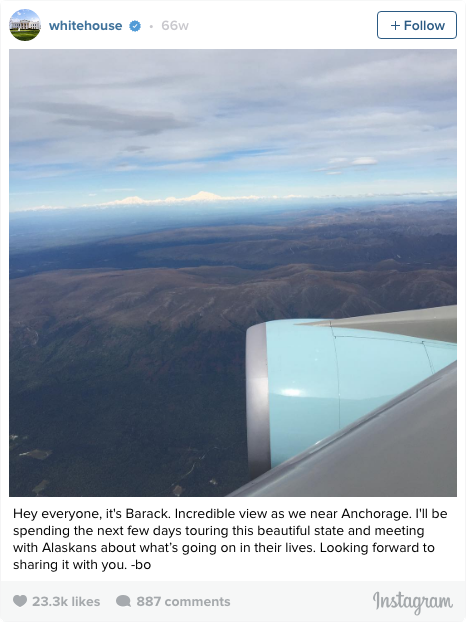 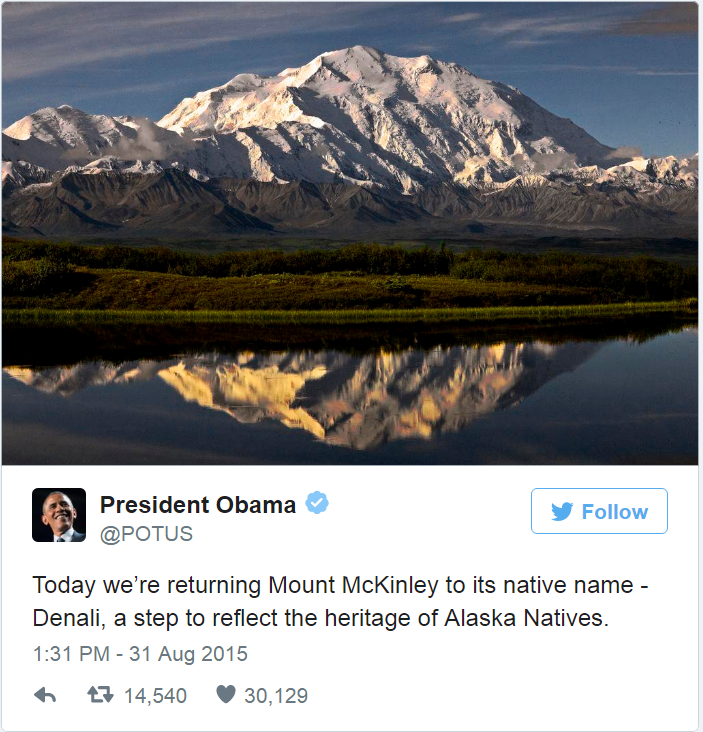 The Administration announces a collaboration to use high-resolution satellite imagery from DigitalGlobe to produce Digital Elevation Models of Alaska and the Arctic. See the blog post.

OSTP Director John Holdren reflects on the two days he and other senior OSTP officials spent traveling in Alaska this past weekend. See his blog post.

The first people came to Alaska about 15,000 years ago following herd animals across the Bering Land Bridge. The Amerind migration group continued south to populate all of the Americas.

The second migration across the Bering Land Bridge brought the Na-Dene and Eskimo-Aleut. They arrived in Alaska about 12,000 BP and moved through the north to populate Alaska and Canada.

The most recent ice age ended and sea levels rose to cover the Bering Land Bridge, isolating the American populations.
New data from the fossil record revealed that the first permanent settlements in the high arctic areas appeared 4,000-3,500 years ago. These people were characterized by their flaked stone tools. Studies suggest that they originated in Siberia, staged in Alaska for a brief time, then expanded across Arctic Canada and into Greenland.

Obsidian artifacts dating from 4,000-1,000 years before present have provided concrete evidence of transcontinental interaction between Siberia and Alaska.
Vitus Bering, a Danish explorer, discovered the Bering Strait between Asia and North America.
A Russian expedition led by Vitus Bering, along with George Steller, made the first "discovery" of Alaska, landing on or near what today is Kayak Island. Bering explored the western coast of Alaska until he was shipwrecked and died on Commodorsky Island, later named Bering Island.
The first Russian Settlement in Alaska was established on Kodiak Island at Three Saints Bay.
Coal mining began at Coal Harbor.
The United States purchased Alaska from Russia for $7.2 million dollars in gold, two cents an acre. At the time of the purchase, the United States referred to it as "Seward's Folly".
See a copy of the check.
Gold was discovered near Sitka.
Oil was discovered in the Cook Inlet.
The Klondike Gold Rush occurred. Over 100,000 prospectors would attempt to travel north to seek their fortunes in the Klondike.
From the day of his inauguration, 26th President Theodore Roosevelt was brought into discussions on then-territory Alaska, as disputes over boundary lines ensued through 1902.

Protecting our lands and wildlife was one of the chief concerns of President "Teddy" Roosevelt. Know as our "Conservationist President" Roosevelt used his authority to protect wildlife and public lands by creating the U.S. Forest Service and establishing 51 Federal Bird Reservations, 4 National Game Preserves, 150 National Forests, including the Tongass and the Chugach in Alaska.

He eventually enabled the 1906 American Antiquities Act, which gave the president authority to restrict the use of particular public lands in America. It gave the president the power to protect "historic landmarks, historic and prehistoric structures, and other objects of historic or scientific interest" on federal land by designations.
President Theodore Roosevelt established the Tongass National Forest.
Alaska was renamed a territory after the Second Organic Act of 1912.
In early August, 1944 President Franklin Delano Roosevelt (FDR) journeyed to Alaska for a six day inspection and fishing trip, the second President to make the trip north. While in Alaska FDR made stops at Adak, Kodiak, and Auke Bay, visiting with soldiers as part of a trip across the Pacific during World War II.
See images.
Almost one hundred years after the purchase of Alaska, it finally becomes the 49th state. The lobbying of the Alaska Statehood Committee and the passionate arguments from Alaskans result in President Eisenhower's signing of the official declaration to make Alaska a state on January 3, 1959.
See images.
President Obama becomes the first President to visit America's Arctic, to witness firsthand the impacts of climate change on this region on the frontlines. The President, along with Secretary John Kerry and foreign ministers will discuss the challenges of how to best manage the future of this region, and the people and natural resources that reside there.